The Conservative government will post a dramatically smaller deficit for the most recent fiscal year, a $5.2-billion shortfall that represents an $11-billion improvement over the latest budget estimate.

Prime Minister Stephen Harper revealed the figure on Thursday to a business audience at the cavernous Millennium Gardens banquet hall in suburban Brampton, Ont., indicating that much of the difference is due to one-time factors. He said Ottawa is still expected to post a small deficit in the current fiscal year, which started on April 1.

Mr. Harper said the government plans to act quickly on some of the things it promised to do when the budget is balanced, including allowing couples with children under 18 to split their income for tax purposes.

"The government has no plan or no intention to move this year into a surplus," Mr. Harper said of the 2014-2015 fiscal year. "We continue to intend on a small deficit this year before returning to surplus. We also intend, however, to move quickly to implement promises that we made to Canadians during the last election."

It was the latest significant announcement the Prime Minister has made far from Parliament Hill, which has become a source of irritation for opposition members, who insist important information should come out in Ottawa.

The 2011 Conservative platform estimated that the income splitting "family tax cut" would cost the government $2.5-billion in foregone revenue. The pledge has proved controversial, with a wide range of public policy experts saying it would primarily benefit high-income Canadians.

The 2011 platform also promised smaller tax cuts, such as doubling the Children's Fitness Tax Credit, creating an adult fitness tax credit, and doubling the annual amount that can be contributed to tax free savings accounts.

The new projected deficit of $5.2-billion for the 2013-14 fiscal year is in contrast to the $16.6-billion estimate in the 2014 budget. Finance Canada would not provide details on Thursday on the one-time factors the Prime Minister mentioned. However, it said a full accounting will be formally released shortly.

With a fixed election date of Oct. 19, 2015, the Conservatives are placing economic management at the forefront as they prepare to campaign for another term in office. The projection of a surplus for 2015-2016 will allow the government to announce a mix of tax cuts and new spending in the 2015 budget.

Yet the $11.4-billion year-end adjustment Mr. Harper announced on Thursday shows that budget projections can miss the mark.

Tax cuts announced in the 2015 budget would likely take effect on Jan. 1 of that year, forcing other parties to decide whether they want to campaign against measures that are already in place.

NDP finance critic Nathan Cullen said that while a smaller deficit is positive, the government should say how it occurred and whether it is the result of spending cuts.

Liberal finance critic Scott Brison questioned how the government could be so far off its earlier projection.

"The Conservatives show us consistently that you can't trust their numbers," he said.

In Brampton, Mr. Harper said his government had wrestled down the deficit by controlling its program spending, including by merging back-office functions.

Mr. Harper said he is not a fan of large-scale government spending to sustain economic activity, but added that his government did what it had to do when it boosted spending during the recession, and is quickly "unwinding it."

"People talk about Keynsianism," he said, in reference to economist John Maynard Keynes, who is often quoted by politicians who advocate deficit spending to stimulate sluggish economies. "Keynes, of course, advocated maintaining balanced budgets over the longer term." 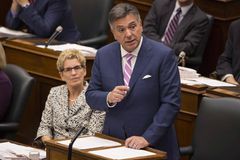 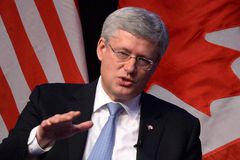