Nova Scotia Liberal Leader Stephen McNeil has found that being the front-runner has made him the quarry in an election campaign as he became the target of attacks from both his opponents in the first formal televised leaders debate before voters cast their ballots on Oct. 8.

Mr. Dexter in 2009 became the first New Democrat to lead his party to victory in Atlantic Canada, and he used the debate to give a history lesson, telling voters his two challengers represent parties that left an economic mess the NDP is trying to clean up.

The 90-minute debate televised by CBC centred on health care, energy, care for seniors, the future of schools faced with dwindling enrolment and what role the government should play in helping create jobs.

Mr. Baillie and Mr. McNeil often squared off, and at one point, the Tory leader took Mr. McNeil to task because he opposes cutting the harmonized sales tax until the province can record surpluses that make up for the revenue shortfall.

Mr. McNeil cast his position as reasonable, dismissing a projected surplus of $18.3-million forecast by the NDP government for this fiscal year.

Mr. Baillie accused Mr. McNeil of "scaring" people into believing that they should be paying the highest taxes in the country, which prompted a curt reply from the Liberal leader in one of the more memorable moments in the debate.

"It's not scaring people. It's being honest, Jamie," Mr. McNeil snapped. "It's being upfront and truthful. Try it."

The exchange left Mr. Dexter shaking his head before he took issue with Liberal and Tory plans to slash the number of health boards.

"They pretend that's going to save them some money," said Mr. Dexter, who took the casual approach by deciding against wearing a tie, standing apart from the other two party leaders in his open-neck shirt and sport coat. "What we know, in fact, is that whenever you create these centralized super bureaucracies, they actually cost more money and not only that, they throw health care into chaos."

Mr. Dexter also picked up on that theme while discussing the province's energy future, saying it was the legacy of Liberal and Tory governments that chained Nova Scotia to fossil fuels.

Mr. McNeil has promised to shift the $46-million cost of funding programs run by Efficiency Nova Scotia from customers to Nova Scotia Power and he wants to make it easier for private renewable energy firms to sell electricity directly to consumers, which he describes as breaking the utility's monopoly.

Mr. Baillie went after that plan.

"No one believes there are going to be three or four Nova Scotia Powers running around our province after the next election. There will be one," he said. "You can't name one place in North America where this has actually worked."

He defended his plan to freeze power rates for five years, despite concerns from critics who say it's not sustainable.

Asked after the debate whether he got frustrated from the fire he took from Mr. Dexter and Mr. Baillie, Mr. McNeil replied: "There's no question I was the target tonight, but I didn't feel frustrated at all. I think it's important that if you are accused of something or there's an accusation put there that you don't let it go unchallenged."

Mr. Dexter, meanwhile, said he decided not to wear a tie because he wanted to be comfortable.

"I think in the end it's really clear that it provides the contrast that I actually do stand apart from my two colleagues," he said.

Mr. Baillie was asked about his most memorable exchange with Mr. McNeil, and whether he felt he was getting under the Liberal leader's skin.

"I think it is important that Nova Scotians see the way that their premier will conduct themselves," he said. "These are important issues but we ought to be able to disagree in a respectful way not to get angry and huffy."

Going into the campaign, the NDP held a commanding majority in the legislature, holding 31 seats. The Liberals had 12 seats, the Tories seven and two seats were vacant.

Redistribution drops the number of seats in the legislature to 51 from 52. 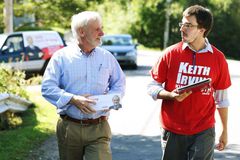 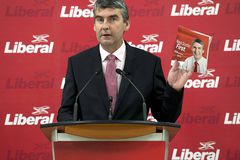