Battered by weak economies and weighted down with debt, the premiers of Ontario and Quebec have united to accuse the Harper government of putting its own fiscal house in order at the expense of the provinces.

With a new federal budget to be tabled in just over three weeks, tensions between Ottawa and many provinces are building as fiscally challenged premiers fret about further erosion in transfer payments for health care and other programs.

Visiting Toronto Monday, Quebec Premier Jean Charest joined his Ontario counterpart Dalton McGuinty in warning Ottawa not to balance its books by downloading costs onto cash-strapped provinces. He also offered a history lecture to Prime Minister Stephen Harper, saying that in times of strong majority government in Ottawa, the provinces can offer an effective check on federal power.

Federal Finance Minister Jim Flaherty, who is to table his budget on March 29, showed little patience for arguments that Central Canada is a special case.

Mr. Charest put Mr. Harper on notice that the majority his government enjoys does not extend beyond the House of Commons. He delivered that salvo in a speech on Monday to The Canadian Club of Toronto, where he quoted Canada's first prime minister, Sir John A. Macdonald, to argue that Mr. Harper is abandoning a long tradition of collaborating with the provinces. In a federal system of government, Mr. Charest said, the Prime Minister does not get to make unilateral decisions.

Mr. McGuinty jumped into the fray by warning that Canada cannot move forward as a nation if the federal government persists with its "frankly troubling" course by downloading more costs on to the provinces, especially without consulting them first. "It's nothing but a shell game," Mr. McGuinty said at a joint news conference with Mr. Charest. "When you download responsibility or costs from one level of government to the next, taxpayers simply pay a cost to a different government. In the end, no one wins."

By presenting a united front on issues they have in common, the leaders of Canada's two largest provinces are sending a message to Ottawa that they are a formidable alliance. As Mr. McGuinty pointed out, their combined economies are the fourth-largest in North America.

Mr. McGuinty and Mr. Charest are both under pressure to deal with their own fiscal burdens. The deficit in Ontario will reach $16-billion this fiscal year, eclipsing every other province.

There seems little likelihood of special consideration from Ottawa.

"Ontario has fundamental budgeting problems," Mr. Flaherty said in Ottawa on Monday. "They have major spending problems that built up over eight years. I think we need to address the fundamental issues that we have in this country, and that includes not just the government of Canada, which is in relatively good shape, but the provincial governments and sub-national governments that have serious deficits and debt," he said.

Mr. Charest also complained about the fact that the federal government simply presented its spending plans on long-term funding for health and social transfers to the provinces last December. Health transfers will continue to increase at 6 per cent a year until 2016-17 before moving to a system that ties increases to economic growth, but they will not fall below 3 per cent.

Mr. Charest said Ottawa's contribution to health care will eventually drop to around 11 per cent of total federal-provincial spending from historic levels of 50 per cent.

However, he would not be drawn into tensions on another front: the recent war of words between Mr. McGuinty and Alberta Premier Alison Redford, over whether the strong Canadian "petro dollar" was hurting manufacturers and exporters in Central Canada. Mr. Charest is a long time friend of Ms. Redford – he said during his speech he was "thrilled with joy" to see her become Premier of Alberta.

"Mr. McGuinty and Madame Redford have said what they have to say, and I don't have any comments to make on that," he said after his speech.

Mr. Charest said he met with Ms. Redford last month, where he told her they can work together on her push to create a national energy strategy. But he said he attached two conditions to his support. There must be respect for provincial jurisdictions. "And if the federal government is to play any kind of a role," he said, "it should be on invitation only." 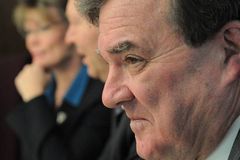 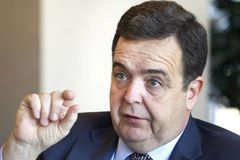 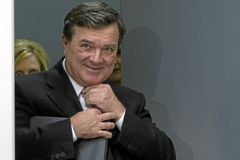 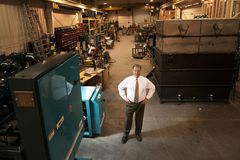 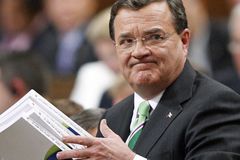 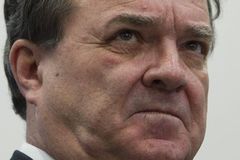