Ontario is now a magic kingdom. Like a magic-mushroom kingdom. Its politics are hallucinatory weird. And what's unfolding is definitely not some stoner comedy. What's unfolding beggars the description "surreal."

Take what happened on TV on Thursday evening. The wildly elastic fictive quality of it was phantasmagoric and nauseating.

Former Ontario Progressive Conservative Party leader Patrick Brown appeared on TV Ontario's The Agenda, interviewed by host Steve Paikin. Brown was inelegantly ousted a few weeks ago following allegations of sexual misconduct in his past. Paikin has also faced sexual-harassment allegations and denies them but, as a third-party investigation is carried out, he cannot deal directly with issues of sexual misconduct on the show.

None of this was actually explained. You figured it out yourself if you were following along. What was explained is that Paikin's wife has some volunteer connection to the PC party. Right. Sure thing. Trippy, but whatever.

Meanwhile, on Global TV, Caroline Mulroney, a candidate to replace Brown, was interviewed in a plush corporate office high above the city and talked about the corporate art in the office while trying to avoid questions about being elitist. Riddle me that.

You see, Ontario entered the post-truth, anti-truth era very suddenly and at warp speed a few weeks ago and it is now stuck there. We're all reeling and repelled.

The point of Brown's appearance was to sell himself as a smeared, unjustly treated chap now regaining possession of his good name, against all odds. An alleged rogue redeemed? Not so fast.

To call Patrick Brown a rogue would be an insult to rogues everywhere, an affront to those mere miscreants who use wink-and-nod craftiness to get ahead in life or politics. The brazenness of Brown surpasses that. This man-boy, this playboy not of the great Western world, but of the city of Barrie's bars and nightclubs, has an audacity that is epic. And a talent for evasiveness that is monumental.

"The truth is on my side" were the first words out of his mouth in the interview. Not being required to talk about sexual-misconduct allegations, he was obliged to talk about how he managed to be allowed to run to replace himself. Paikin seemed mildly astonished that he'd gotten away with it. Brown, grinning constantly and dressed in a light grey suit with a cheery, light-coloured tie – a perambulating ray of sunshine – declared "I was set up," and set up by "my political adversaries." Not that he would name them. Heavens, no. That would be ungentlemanly, or something.

In the matter of a large and expensively mortgaged house in Barrie, he declared: "My financial information was stolen" and "no one controls me." In the matter of a mysterious benefactor – yep, "mysterious benefactor" features prominently in this nonsensical narrative – he grinned and evaded some more. When Paikin put it to him that an editorial in this newspaper had called on him to pack up his kit bag and go away, he declared that the people of Ontario wanted someone with tenacity.

His spin is that he's a stubborn guy who lives by his own code, like a character from a spaghetti Western.

Paikin put it to Brown that, since he's been kicked out of the PC caucus and is now an independent MPP, it might be a drawback. Watching this exchange was extra strange because, in fact, Brown is the only one of the candidates who does actually have a seat in the legislature. Brown's spin on the matter was that he's not going to be bullied. And he pointed out that he'd be happy to work with people who, essentially, despise him. He was grinning all the time. The less he made sense, the more he grinned.

Mulroney, on Global News, made even less sense. The point of the interview was her call for Brown to quit the leadership race. But the optics were sensationally screwy. Asked how her former job in this Bay Street tower qualified her to run the province, she announced cryptically, "I've been thinking about what's efficient." Her views on a possible carbon tax were unsportingly contrasted by Global with images of melting ice and other climate catastrophes.

The reporter, one Alan Carter, kept going on about the artwork in the office. He asked and asked Mulroney to explain it. She couldn't and denied being responsible for its existence. She called on Brown to go away but, with Brown-level evasiveness, avoided saying she would reject an endorsement from Brown. It was breathtaking. She also denied being an "elite" from the vantage point of a Bay Street office surrounded by the sort of art that costs more than a year's salary for most people. There aren't machines that can measure the audacity.

Sober or stoned, one recoils from these people as one recoils from squabbling rodents. There's nothing funny about it, but if Premier Kathleen Wynne is found cackling, nobody would blame her. 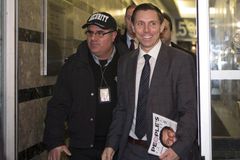 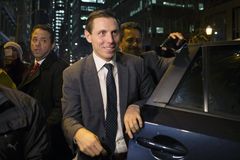 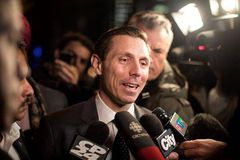