An expenses scandal that laid bare a backroom culture of privilege in Nova Scotia politics has escalated into dozens of criminal charges against one sitting and three former politicians.

The charges announced on Monday came after provincial Auditor-General Jacques Lapointe blew the lid off years of inappropriate spending by politicians, sparking a nine-month RCMP investigation.

A total of 52 charges of fraud, theft, forgery and breach of trust were laid against members of all three parties, including a pair of former cabinet ministers.

News of the charges provoked strong condemnation from both government and opposition leaders.

Premier Darrell Dexter lamented the effects of the scandal on perceptions of the political system.

"Frankly, I'm not just disappointed, I'm angry about it, because we all have to live with the consequences," he told reporters after an unrelated announcement. "It just becomes much more difficult to bring people into public life."

Progressive Conservative Leader Jamie Baillie, who entered politics after the scandal broke, said the charges flow from a flawed system.

"Today's charges are the result of a system where MLAs could set their own rules," Mr. Baillie said in a statement. "This flawed system led some MLAs to act irresponsibly, and possibly criminally, with taxpayers' money. The voters and taxpayers of Nova Scotia deserve justice."

Mr. Dexter, a New Democrat, would not comment on the specifics of the alleged criminality, nor say whether he thought Trevor Zinck, a former New Democrat now sitting as an Independent and facing four charges, should resign. Speaker Gordie Gosse said that the House of Assembly Act does not prohibit a person from sitting in the legislature during legal proceedings.

Mr. Zinck noted that the allegations against him - which include one count of fraud, two counts of theft over $5,000 and one of breach of trust by a public officer - "are yet to be proven before the courts of law." In a statement, he said he would make no further comment.

The Auditor's report, issued last year, focused attention on a clubby and secretive political system, in which politicians of all parties met behind closed doors to approve their generous expense policies. Among the perks, MLAs got tens of thousands of dollars in allowances that did not require receipts. They were simply trusted to use the money appropriately.

David Johnson, professor of political science at Cape Breton University, said that the expenses scandal provided evidence of questionable use of public money that had long been suspected. And public fury at the revelations showed that old-style politics is no longer acceptable.

"There's this backroom culture that people in Nova Scotia have talked about for decades," he said. "But rarely did people lift the rock off the ground and see the slime underneath. It's like exposing this rot to public view and to public ridicule."

The Nova Scotia audit led to a debate on Parliament Hill last year over MPs' expenses. Officials with the Auditor-General of Canada are working on audits of the House of Commons and Senate, and the reports are due in the fall.

Parliamentarians initially resisted the idea of opening their books, but acquiesced in the face of strong public pressure. Auditor-General Sheila Fraser attempted to calm concerns about a Nova-Scotia-style exposé.

A handful of MPs have voluntarily released detailed expenses online, but their move has yet to catch on, although more general lists are made public. The famously insular Senate is also taking steps toward openness. General lists of senators' expenses are released quarterly, and an outside audit that found problems with existing rules was made public in December.

Once the scandal broke in Nova Scotia, embarrassed politicians moved to soothe public fury by tightening their spending rules. 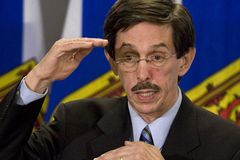 Nova Scotia auditor-general spoke to police about legislators' expenses
May 17, 2010
Nova Scotia politicians can still use household allowance to hire cleaners
April 28, 2010
Follow Oliver Moore on Twitter @moore_oliver
Report an error Editorial code of conduct
Due to technical reasons, we have temporarily removed commenting from our articles. We hope to have this fixed soon. Thank you for your patience. If you are looking to give feedback on our new site, please send it along to feedback@globeandmail.com. If you want to write a letter to the editor, please forward to letters@globeandmail.com.
Comments are closed