A senior business executive whose generic drug firm lobbies Ottawa is helping to organize a $500-per-ticket cash-for-access fundraiser with federal Finance Minister Bill Morneau as the star attraction on Nov. 7 in Toronto.

Apotex issued a statement Tuesday saying the fundraiser is unrelated to the firm but a private initiative by Mr. Sherman.

Related: Liberals shrug off their own ethical guidelines with fundraiser

Globe editorial: With cash-for-access, Justin Trudeau picks up where Kathleen Wynne left off

"This is a private undertaking of the Sherman family, who undertake numerous charitable events as well as supporting events for the democratic process.  Two other couples are hosting the event as well.  No one else from Apotex is planning to attend Mr. Sherman's event," the statement said. "The fundraising event is not part of Apotex's program of government relations. The company's government relations efforts are duly registered under the federal Lobbyists Registration Act and available online for the public to see."

Later on Tuesday, Apotex spokesperson Eli Betito clarified that the Shermans are not hosting the event, but are simply members of the event committee.

The Liberals have come under fire in recent days after The Globe and Mail reported on a cash-for-access fundraising system that uses cabinet members to draw big donations. This practice appears to violate rules Mr. Trudeau put in place last year that ban giving preferential access to government officials in return for donations.

"They lobby the government because they have big interests," NDP ethics critic Alexandre Boulerice said in an interview. "Can you imagine the privilege to have the Finance Minister at your home months before the next budget? This is incredible. Ordinary citizens don't have that kind of access."

Mr. Morneau was the prize guest at the Halifax mansion of mining tycoon-turned land developer Fred George on Oct. 13. About 15 corporate executives – including property developer Jim Spatz, who the Liberal government appointed to the Halifax Port Authority last May – paid $1,500 a ticket to hobnob with the minister as he prepares his second federal budget.

The Liberals had planned a $1,500-a-ticket fundraiser for late September in which Prime Minister Justin Trudeau was the feature guest, but it was cancelled and Mr. Trudeau led a delegation to the funeral of former Israeli prime minister Shimon Peres.

A Bay Street insider told The Globe and Mail the Trudeau fundraiser invitation came from one of the organizers, who e-mailed him a link with instructions on how to make the $1,500 payment by personal cheque or credit card.

"It starts right at the top. It's a matter of leadership," Conservative MP Blaine Calkins told The Globe. "[Trudeau] is not following his own rules for ethics and accountability and the appearance of a conflict of interest…when somebody is at the event that is a potential beneficiary of a government contract or a change in government policy."

Other organizers were Toronto lawyer Malcolm Mackillop, who was chair of the event; Carol Wilding, CEO and president of the Chartered Professional Accountants of Ontario; and high-profile labour and employment lawyer Laura Williams.

The fact the Prime Minister was planning to take part in this $1,500 fundraiser may explain why he has refused to discipline cabinet ministers for violating the new ethics rules he laid down three weeks after taking power last November. Those rules stated "there should be no preferential access, or appearance of preferential access, accorded to individuals or organizations because they have made financial contributions to politicians and political parties."

The rules outlined in the Prime Minister's Open and Accountable Government rulebook also said there should be "no singling out, or appearance of singling out, of individuals or organizations as targets of political fundraising."

The PMO has said the fundraisers are not exclusive because they are open to all, and that no laws have been broken.

The NDP wrote to Ethics Commissioner Mary Dawson on Monday, urging her to investigate the Oct. 13 fundraiser in Halifax. Ms. Dawson said last week that the current law on conflict of interest prevents her from making a finding on whether the Morneau event was improper.

Ms. Dawson told The Globe last week she cannot pass judgment on whether the fundraisers breach Mr. Trudeau's rules because the Liberal Prime Minister gave that mandate to the Privy Council Office, the senior bureaucracy that serves the Prime Minister's Office.

In a later TV interview, she noted that the Trudeau fundraising rules are "much more stringent" than the Conflict of Interest Act, which she enforces as an independent watchdog. She said those rules should be added to the federal ethics law so she can crack down on special-access fundraisers. 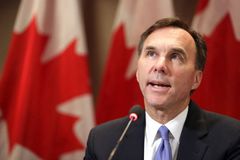 Liberals shrug off their own ethical guidelines with fundraiser
October 23, 2016
Follow Robert Fife and Steven Chase on Twitter @RobertFife @stevenchase
Report an error Editorial code of conduct
Due to technical reasons, we have temporarily removed commenting from our articles. We hope to have this fixed soon. Thank you for your patience. If you are looking to give feedback on our new site, please send it along to feedback@globeandmail.com. If you want to write a letter to the editor, please forward to letters@globeandmail.com.
Comments