The RCMP has released several documents concerning its investigation into Senator Mike Duffy and a payment he received from Nigel Wright, the prime minister's former Chief of Staff. Below, see several important passages from one of the documents. Explore all of the original documents here.

The allegations
This section lays out the offences against Mr. Duffy, which the RCMP says it is investigating. There are two counts of breach of trust and another of fraud against the government, as specified in section 121(1)(c) of the Criminal Code.

Mr. Duffy's residency
The court records reveal for the first time that Mr. Duffy became a PEI resident on the same day he was appointed to the Senate to represent that province. Until December, 2008, Mr. Duffy held an Ontario driver's licence that listed an Ottawa address. He applied for a PEI licence and listed his Cavendish, PEI cottage as his residence when he was appointed to the Senate. The residency question is relevant for two reasons. Senators are constitutionally required to reside in the province they represent and they can only receive a housing allowance from the Senate — which Mr. Duffy claimed — if their "primary residence" is more than 100 kilometers away from Ottawa. 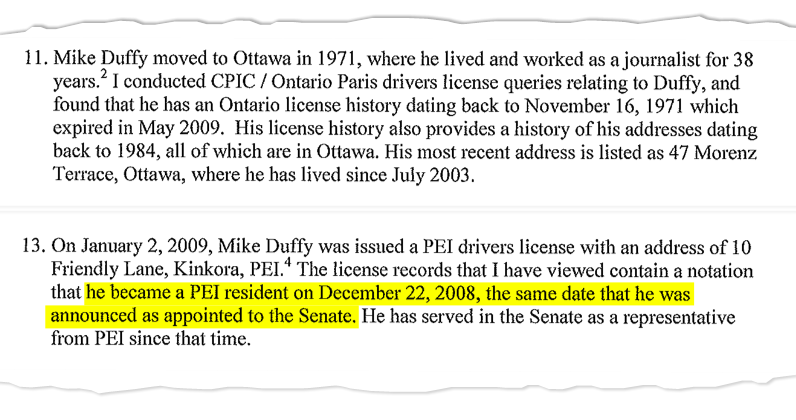 The health card
Media reports said earlier this year that Mr. Duffy's office had asked PEI's health minister to expedite the Senator's December 2012 request for a PEI health card. These documents show, for the first time, that Mr. Duffy also attempted to speak with the minister himself on the same day the request was made to expedite his file. 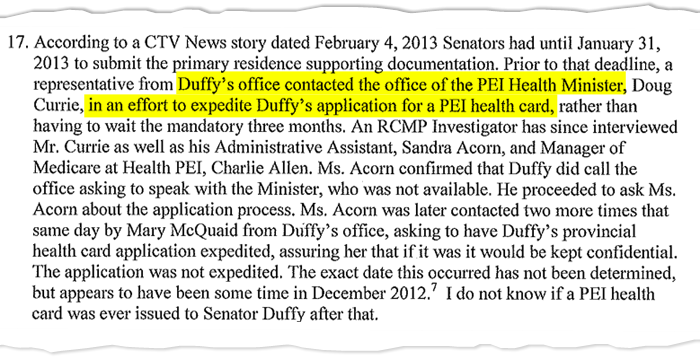 Travel expenses
The records show new details about the specific expense claims Mr. Duffy made to the Senate and Conservative campaigns in Atlantic Canada during the 2011 federal election campaign. They show he charged flights and partial per diems to the Senate, and asked the campaigns to cover his hotels, gas and car rental. 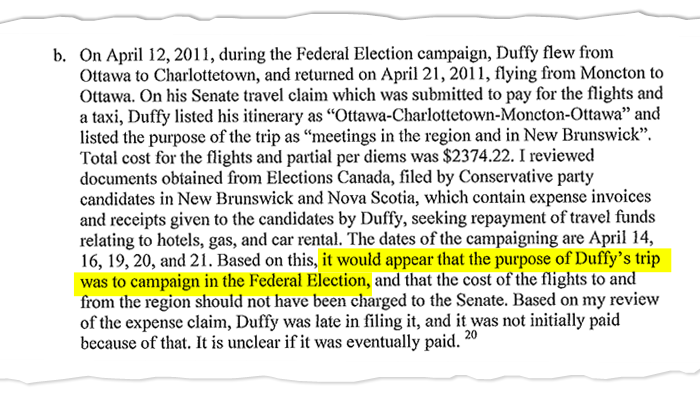 Per diem expenses
The documents say Mr. Duffy attempted to claim per diem expenses for work in the National Capital Region on at least two separate occasions when he simultaneously filed travel expenses that showed he was not, in fact, in Ottawa. He was denied in both cases because his claims clearly contradicted each other. He appears to have made a similar, contradictory claim in October, for which he was partially reimbursed. 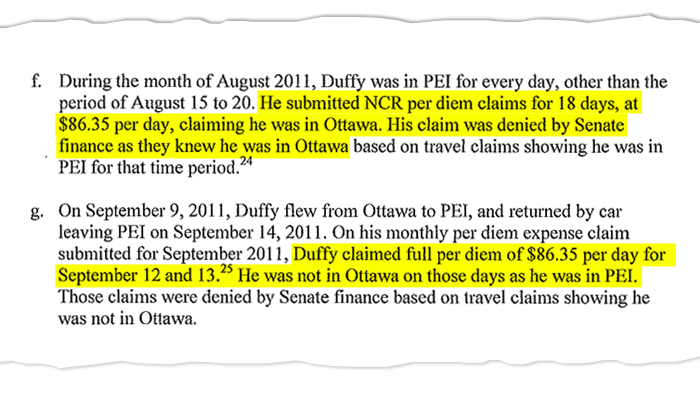 Mr. Wright: suspect or witness?
The RCMP point out here that they told Mr. Wright's lawyers that investigators had not yet decided whether to consider the former chief of staff to the prime minister as a suspect or a witness.

Residency requirements
Through his lawyers, Nigel Wright told RCMP investigators that Mr. Duffy was worried that his Senate seat could be at risk if he stopped claiming that his primary residence is in PEI. Mr. Wright assured him there was no risk. The Constitution requires that Senators "reside in" the province they are appointed to represent but does not define what the term.

Paying back the money
The Conservative Party initially planned to cover Mr. Duffy's expenses but balked when it found out how much it would cost.

Was there a deal?
These two conditions are part of the reason the RCMP say it believes there was a deal in place when Mr. Duffy accepted the money — and form an important part of investigators' case alleging Mr. Duffy may have committed fraud on the government.

Who knew?
Prime Minister Stephen Harper has denied knowing about the payment before it came out in media reports. Through his lawyer, Mr. Wright revealed that three people in the Prime Minister's Office knew about the plan.