A witness who is helping Elections Canada unravel a Conservative MP's 2008 campaign expenses says he has been publicly bullied, discredited and intimidated.

Frank Hall, who ran an Ottawa-based polling firm that did work for Conservative MP Dean Del Mastro, has written to both the Speaker of the House of Commons and the Prime Minister, saying Mr. Del Mastro has abused the concept of parliamentary immunity.

"It's purpose is not to enable MPs to settle personal scores with ordinary, individual Canadians, on private matters, by engaging in character assassination of them," Mr. Hall wrote Monday in a letter to Speaker Andrew Scheer.

Mr. Hall says if Mr. Del Mastro, Stephen Harper's parliamentary secretary, is allowed to slander a private citizen's good name in Parliament, then all witnesses who could help root out election fraud will be intimidated.

Mr. Del Mastro gave an impassioned speech in the Commons last week that accused Elections Canada of "malice and contempt" in its ongoing investigation of alleged campaign overspending.

The MP from Peterborough, Ont., also accused his former pollster Hall – by name – of having ulterior motives in assisting Elections Canada.

And he said a judge should not have granted a search warrant based on Mr. Hall's evidence.

"It is inconceivable that the presiding justice in this matter would not have asked the investigator quite simply, 'What do we know about Frank Hall?' " Mr. Del Mastro said.

He went on to state: "I stand accused by a person who has admitted to falsifying records and reports, failed to deliver on contracts time and time again, and been involved in other civil disputes with public officials."

Mr. Hall, a private citizen whose polling company, Holinshed Research, is no longer in business, was not present for Mr. Del Mastro's speech, nor could he have addressed the claims if he had been.

"Mr. Del Mastro enjoys privileges not afforded to a private citizen — the ability to speak about other Canadians in the House of Commons without being held to account for the inaccuracy of his remarks," he said in his letter to Mr. Scheer.

"He is aware that I have no legal right, or ability, to defend myself from his slander."

There appear to be two Elections Canada investigations of Mr. Del Mastro.

One revolves around claims the MP paid Holinshed $21,000 for campaign work out of his own pocket, then kept the expense off his official books. The contract would have put him well over his campaign spending limit.

There have also been published reports that Elections Canada examined whether a family business illegally reimbursed employees for donations to Del Mastro's campaign.

But in more than a year of interviews by investigators and courthouse production orders, no charges under the Canada Elections Act have been laid, nor has Del Mastro been cleared – prompting the MP's appeal in the Commons last week.

"I have been working with Elections Canada to provide documents, explanations and other evidence, as requested," said Mr. Hall. "I have done so because I feel it is my duty as a citizen."

In a separate letter to Prime Minister Stephen Harper, Mr. Hall wrote that he "should be able to assist in legitimate investigations without fear of persecution or reprisal from my government."

He concluded by pointing to Laureen Harper's recent endorsement of anti-bullying programs.

"I would ask that you ensure that the conduct of your parliamentary secretary reflects these noble efforts," wrote Hall.

Three other Conservative MPs – Shelly Glover, James Bezan and Jeff Watson – are all battling the elections watchdog over their 2011 campaign expense returns. 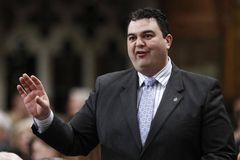 new
Del Mastro meeting with Elections Canada to discuss campaign financing
July 6, 2012
Tory MP says Elections Canada investigation hurting family name
July 4, 2012
Report an error
Due to technical reasons, we have temporarily removed commenting from our articles. We hope to have this fixed soon. Thank you for your patience. If you are looking to give feedback on our new site, please send it along to feedback@globeandmail.com. If you want to write a letter to the editor, please forward to letters@globeandmail.com.
Comments