Jacques Duchesneau's formal entry into the Quebec election quickly triggered a realignment of forces, stealing thunder from the Parti Québécois in its efforts to bring down the Liberals.

The anti-corruption crusader and former cop showcased his political talents as a candidate for the third-ranked Coalition Avenir Québec (CAQ) on Sunday, promising to clean up the province after years of scandals in the construction industry and the municipal world.

It's too early to measure the impact on public opinion of Mr. Duchesneau's arrival, but strategists for other parties said the third-place CAQ is slowly moving up in internal polls. If the CAQ does rise, it could cause a number of three-way races throughout the province, with its coalition of sovereigntists and federalists likely to eat into both PQ and Liberal support.

Mr. Duchesneau's crime-fighting pedigree stretches back years and he enjoys widespread popularity in Quebec, which explains why the PQ is not planning to take him on directly. The Quebec Liberals, however, have already started to portray him as a "loose cannon" in the hopes of thwarting his attacks on their record over the past nine years.

The CAQ is hoping to capitalize on widespread disapproval with the Liberal government under the slogan: "Enough, things have to change." CAQ Leader François Legault said Mr. Duchesneau would be his deputy premier, referring to him as "Quebec's Eliot Ness."

At his initial news conference, Mr. Duchesneau – who will run in the riding of St-Jérôme, just north of Montreal – did not lay out concrete new anti-corruption measures. Still, he said he was the right person to change Quebec politics, vowing to put an end to a culture of kickbacks and payoffs. "Between now and [election day] Sept. 4, every time a corrupter and a scammer will see a CAQ billboard, I hope they'll see that we are here to clean things up in Quebec," Mr. Duchesneau said.

He said the CAQ was ideally positioned to do the job because it is the "only new party" in the race.

The PQ seem unprepared for Mr. Duchesneau's arrival on the political scene, even though news of his announcement had been revealed by The Globe and Mail on Friday afternoon. PQ Leader Pauline Marois refused to answer questions about Mr. Duchesneau in an improvised media appearance Sunday, just ahead of the unveiling of the party's platform, fuelling a sense of panic in PQ ranks.

She did take on the issue of corruption in a 30-minute speech to party faithful, desperately trying to gain back momentum as the party of honesty and integrity, and the only one capable of cleaning up the province. "Listen to me carefully: If ever a member of my government should fail to fulfill their duties I will be intractable. It will be zero tolerance," Ms. Marois said.

Ms. Marois also took aim at any perception that Mr. Duchesneau's presence ensures the CAQ can tackle the issue that resonates with Quebec voters.

"I know what to do and it takes constant determination. You can't do it alone. It takes a team to clean house," Ms. Marois said, surrounded by her candidates.

Quebec Liberal Leader Jean Charest didn't hesitate to take aim at Mr. Duchesneau, especially the assertion that 70 per cent of political financing in Quebec involved dirty money. "It's pure demagoguery," Mr. Charest said shortly after Mr. Duchesneau formally entered the race. "If he has specific cases, he should mention them to the authorities and they will take care of them."

Still, Mr. Duchesneau's candidacy overshadowed the Quebec Liberals' plans to talk about a promised increase in funding to companies that create subsidized daycare spaces in their workplaces.

The CAQ was well behind the PQ and the Quebec Liberals in opinion polls at the start of the election campaign, and pollster Jean-Marc Léger said the party needed to make a big splash in the early days to make it a three-way race. With Mr. Duchesneau now on board, along with well-known doctor Gaétan Barrette as a potential health minister, Mr. Legault is stating that his party is ready to form the next government.

"Now we can put a name and a face on our desire to clean up the province," Mr. Legault said. "A few months ago, I was saying 'Wait and see.' Now you can see for yourselves."

Mr. Duchesneau said he would not engage in any political fundraising to preserve all of his necessary leeway to combat corruption in Quebec. He added that he carried out "due diligence" on the CAQ and Mr. Legault before joining the party.

Mr. Duchesneau had promised earlier this year not to enter active politics, but he explained that a week ago he decided he could not sit on the sidelines. He added he firmly disagreed with Mr. Charest's decision to give himself a score of eight out of 10 for his anti-corruption measures, stating that the government deserved a score of two out of 10. Charest needs to address the elephant in the room
August 3, 2012 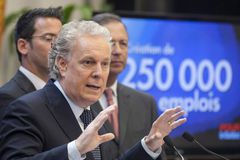