For 10 weeks, Justin Trudeau and Tom Mulcair slugged it out over who represented change from Stephen Harper. It was "real change" versus "ready for change." Both knew a majority of voters felt a powerful sentiment for a change in Ottawa, and winning that group was the first step to winning power.

The New Democratic Party's Mr. Mulcair, who started as the front-runner, spent much of the campaign selling caution more than change. Now, Mr. Trudeau, the Liberal Leader, is on top. But the last week of this election campaign will still revolve around the fight over who is really the agent of change.

Mr. Trudeau will try to simply assume the mantle. He'll stop talking about Mr. Mulcair, and focus instead on a head-to-head comparison with Mr. Harper, including in a barrage of ads, arguing that most families will get more with his child benefits and middle-class tax cuts than with the Conservatives' package.

Mr. Mulcair will seek to scrap his way back into the contest with a campaign pitch refocused on fighting the Trans-Pacific Partnership trade deal, arguing it will threaten Canadian jobs – as well as ads aimed at conveying the idea the NDP has momentum, to counter the feeling his party has been left behind.

The difference in strategies underlines where each party stands with a week to go. Mr. Trudeau is moving from the pitch he used to attract supporters, to a deal-closer on pocketbook issues aimed at clinching votes. Mr. Mulcair is on his second strategy: No longer reassuring voters he'd balance budgets, he has retrenched to a combative, traditional NDP message that he'll fight to stop the TPP.

But it's still a last-week dynamic that will shape the election result. Much of this election is a referendum on Mr. Harper, but the Conservative Leader's support has remained relatively stable. The last-week question is whether Mr. Trudeau will run into voting day as Mr. Harper's main challenger, or Mr. Mulcair claws his way back in.

One voter in 10 is still undecided, according to Nanos Research polling firm – "hard-core last-minute shoppers," said Nik Nanos. And many who have moved from the NDP to the Liberals are still primarily non-Harper voters, Mr. Nanos said: If Mr. Trudeau falters, "Tom Mulcair is a bit of an insurance policy."

It didn't start that way. At the launch, Mr. Mulcair was ahead, touting another orange crush, and reassuring voters that he'd balance budgets. But Mr. Mulcair's "campaign for change" faltered on a key point: He failed to convey to voters a clear idea of the change he would bring them. Mr. Trudeau did nothing but.

To counter the perception that Mr. Trudeau was a lightweight, the Liberal campaign emphasized that he had a "plan," even placing supporters behind the Liberal Leader at campaign events holding up signs that said "PLAN." And whether you like it or not, the plan is understandable enough: Spending on infrastructure to produce jobs and breaks for the middle class.

On the campaign trail, Mr. Trudeau reinforces the message that he'd start an era of construction. In Vaughan, on Thursday, he wore a hard hat for a photo op at the College of Carpenters and Allied Trades, raising a wall framing, grinning and hammering in a nail, before promising $2-billion for Toronto-area transit. Mr. Harper, he said, "forgot that most people don't travel by motorcade." In every speech, he says the Liberals will invest now to make an impact right away.

In Sussex, N.B., where Mr. Trudeau packed an old railway station, Megan Carr, a 25-year-old nurse watching from across the street, seemed to have heard the message: She doesn't like Mr. Harper, and considered Mr. Mulcair's NDP, but liked Mr. Trudeau's message about growth and jobs. "It seems like everybody's talking about making cuts, and that's not the future," she said.

Mr. Mulcair hasn't been able to convey the same clear idea of his change. His party was concerned voters would see the NDP as too much change, and emphasized caution. Budgets would be balanced, and promises would be implemented over years. By Friday, when the party released its full platform, it was a telling document: It ticked off dozens of boxes, with modest sums for many goals, but there was no centrepiece. Subsidized, $15-a-day child care was a key selling point, but it wouldn't be in place for eight years – and Quebeckers already have it.

It meant the NDP didn't have a strong pitch to turn to when the winds changed. When the Conservatives promised to ban the niqab at citizenship ceremonies, it struck a chord in Quebec and placed new scrutiny on Mr. Mulcair, the front-runner in the province. He stuck to his principles and argued against the ban, but he didn't have a channel-changer. Mr. Mulcair accused Mr. Harper of divisive politics to distract from his economic record – but it was Mr. Trudeau who could jump in to tout his plan to spend on infrastructure to boost the economy. The niqab shook voters loose from the NDP, but that didn't mean they went to proponents of the ban: The lion's share went to the Liberals.

Now, Mr. Mulcair thinks he does have a new pitch. The Trans-Pacific Partnership that Mr. Harper's government signed last week has worried auto workers and dairy farmers. New NDP TV commercials, backed by ominous music, raise concerns for jobs, drug costs and the environment, and he promises to stand up against it. And the NDP can use it to attack Mr. Trudeau as well as Mr. Harper, arguing the Liberal Leader isn't really a change. "Once again, when it matters most, Justin Trudeau is choosing to stand with Stephen Harper," Mr. Mulcair said in Montreal Friday.

But it's now Mr. Trudeau who is campaigning in Conservative ridings, as he did last week in places such as London, Vaughan and Sussex. Mr. Mulcair, meanwhile, is left arguing there's still a way he can win – trying to regain his claim to be the agent of change, before Mr. Trudeau walks away with the title. 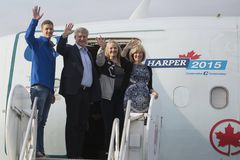 Liberals hold on to lead in latest poll as election approaches
October 11, 2015 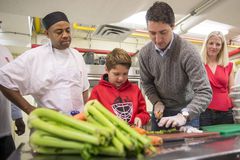 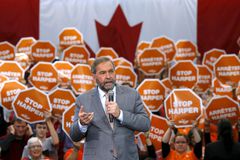 Platform comparison: Where the parties stand on the top campaign issues
October 9, 2015
Follow Campbell Clark on Twitter @camrclark
Report an error Editorial code of conduct
Due to technical reasons, we have temporarily removed commenting from our articles. We hope to have this fixed soon. Thank you for your patience. If you are looking to give feedback on our new site, please send it along to feedback@globeandmail.com. If you want to write a letter to the editor, please forward to letters@globeandmail.com.
Comments