It was not long into the final debate of the Quebec election campaign when the old wound was exposed again.

It wasn't quite Shakespeare, but the two former allies who dreamed of Quebec statehood and once plotted together to find a way toward Quebec independence exchanged barbed accusations of betrayal, cowardice and inhumane conduct.

Parti Québécois Leader Pauline Marois, who still keeps the faith, struck hardest in the one-on-one debate, asking questions on the minds of Quebec sovereigntists and federalists alike: How could François Legault sell out the dream of a nation? How can he ever be trusted again, with the province's education, health system and finances?

"Having courage is being able to maintain your convictions, even when it's going badly and you're trying to get through a storm," Ms. Marois said in a segment that was supposed to be dedicated to health.

Ms. Marois also accused Mr. Legault, the former PQ finance critic, of fleeing his old party in 2009 because he lacked the spine to ask tough questions. Ms. Marois was referring to her request as Mr. Legault's leader that he press for answers from Pierre Brunet, the former chair of Quebec's pension fund, after it had a terrible year of investments. Mr. Brunet was terminally ill.

"When you left our party, you left because you thought we were too tough. You didn't like it. But our methods helped root out corruption," Ms. Marois said. "I'll live with my choices."

Mr. Legault, the Leader of the Coalition Avenir Québec since it was founded last year, was steeled for the moment, accusing Ms. Marois of trying to force him to attack a dying and defenceless man.

I refused to ask certain questions about him because he was in his final months of life. He had a grave illness. I found it inhuman, what you asked me to do," Mr. Legault said.

But, Mr. Legault added, that wasn't the main reason he left the PQ. He persistently attacked the PQ referendum strategy, using themes he has hit frequently on the campaign. Now is not the time for quarrelsome dreams of nationhood, he countered. Now is the time for the rational, for economic growth and trimming public finances. The nation is weary and needs a few bucks, and a break from quarrel.

"I left because the PQ had one priority, sovereignty, and it had no constructive propositions," said Mr. Legault, who hasn't endorsed Canadian federalism while rejecting a sovereignty referendum. In fact, Mr. Legault's old allegiances slipped out as he criticized Ms. Marois's referendum strategy. "The worst thing that could happen is we lose a referendum," he said.

But he pushed Ms. Marois to the wall on the issue of a sovereignty vote, warning that the PQ would certainly hold one if elected.

The PQ program allows for a referendum to be held if 15 per cent of the population signed a petition to hold it. For Mr. Legault, this would place the future of Quebec in the hands of the more radical elements of the sovereignty movement and demanded if Ms. Marois was comfortable with this.

"If the caribous [hardliners] lead us to the ravine, you will say yes [and jump]" Mr. Legault said.

Ms. Marois said she would still hold the final decision to launch a referendum. "They will be asking the government to hold a referendum. There will be rules to follow," she said.

But Mr. Legault argued that this element was not in the party program and caught Ms. Marois off guard with his persistent charges. "So even if you know you will lose it, you will allow 15 per cent of the population to decide to hold a referendum. How irresponsible." Mr. Legault said.

The CAQ Leader seemed to make points attacking what appeared to be Ms. Marois's weak suit, the economy. During a lively exchange, Ms. Marois was placed on the defensive for failing to produce a financial framework on how she planned to pay for her election promises. Mr. Legault pegged the PQ promises at $3-billion. Ms. Marois lashed back saying they would cost less than $1-billion.

"We will clean house but you can't because you have your hands tied and your only concern is sovereignty … what are you going to tell our kids about the increasing debt, Mr. Legault charged. "The only real debt that you are worried about is the one towards the unions."

Ms. Marois was visibly shaken. "You are really obsessed!" she said.

Key swing ridings that ring Montreal and extend eastward toward Quebec City will decide this election. Three-way races abound. The gulf between the three parties is widest among francophones who are supporting the PQ in droves and who have been eating up these French-language debates to the tune of about 1.5 million viewers per night. 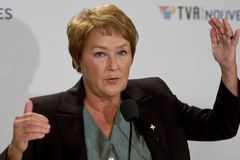 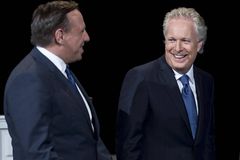 Do Charest’s Liberals have more support than it appears?
August 22, 2012 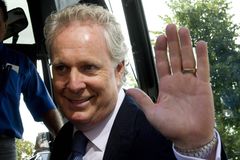 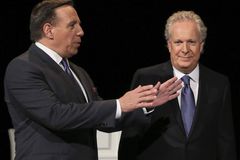