A disorderly scene erupted in downtown Montreal at the start of Quebec's election campaign as a night protest saw injuries, multiple arrests and clashes with police.

The tense atmosphere during this spring's student unrest was rekindled Wednesday as Jean Charest called an election and cast the tuition hike dispute as a central theme.

After several quiet weeks, thousands were once again marching and banging pots and pans in the streets in opposition to the government.

Later in the evening, a small crowd overturned dumpsters to block a downtown street and some people tossed projectiles like bottles and Roman candles at riot police.

A car reportedly slammed into one protester amid a crowd marching in the street. The victim suffered injuries not deemed life-threatening. Police said they had a description of a vehicle's licence plate and model and were investigating a possible hit-and-run.

Another man, wearing a dress shirt and pants, who did not appear to be a protester, was bleeding from his face as he held up a blood-soaked handkerchief.

"Here's your damned red square," he shouted, referring to the symbol of the protest movement. He was escorted, limping, away from the crowd.

Police said as the demonstration ended that 15 people had been arrested and two windows had been broken. One police car was also damaged.

Some protesters were dressed in black and were wearing face masks – a common sight this spring during demonstrations that made international news.

The scene was a far cry from the more peaceful, festive atmosphere as the evening demonstration began.

Thousands marched to send a message to Mr. Charest that the pots-and-pans-banging public is coming after his Quebec Liberals.

One had a large sign blinking the number 100 to mark the 100th nightly protest, although the gatherings have been much smaller in recent weeks.

Some marched past Mr. Charest's office in Montreal. Others jeered at the Liberal leader as he left a campaign event in Quebec City.

The pots and pans were a common sight in the spring as protest percussionists used them every night to contest the government's tuition hikes and controversial demonstration law, Bill 78.

"Let's show the Liberal party we have not forgotten their track record and that we WILL vote in the next elections," said a Facebook invitation to the event.

Earlier Wednesday, Quebec student federations said they would work to get younger people to the polls in greater numbers.

Their target is the governing Liberals.

They said they would work to increase youth turnout, and knock off the governing party in specific ridings – those held by high-profile cabinet ministers and those the party narrowly won in the last election.

Targets include the riding held by Mr. Charest himself, along with those of cabinet ministers like Justice Minister Jean-Marc Fournier, Public Security Minister Robert Dutil and Finance Minister Raymond Bachand.

"We will not encourage young people, or citizens, to vote for the Liberals, because we judge them very harshly."

The student federations have launched a website that will judge the different parties on a number of issues including tuition fees, ethics and the environment.

At a news conference, Mr. Charest said protesters have a right to go after him and that's what democracy is all about. He quipped that he had a strong ally campaigning for him in his Sherbrooke riding, motioning to his wife Michele Dionne.

He also suggested all the noise might backfire on the protesters, come the Sept. 4 election day.

"Now is the time for the silent majority to speak," Mr. Charest said in Quebec City on Wednesday. 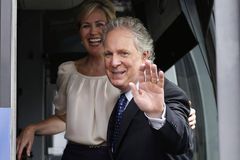 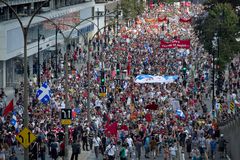 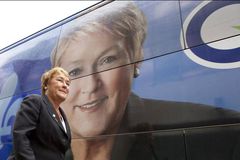 Parti Québécois takes the lead ahead of election: poll
August 1, 2012 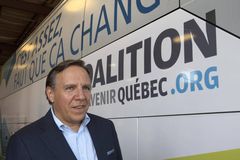 Opinion
Why Quebec’s election is too close to call
July 31, 2012 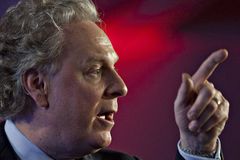 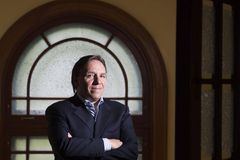 In Quebec election, three-way races could make the difference
July 30, 2012 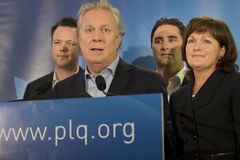 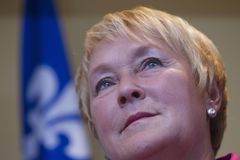