Green party Leader Elizabeth May says voters are looking for responsible debate and an end to the negative attacks they have been seeing in Canadian politics.

Ms. May launched her campaign for the May 2 election on Saturday in the Vancouver Island riding of Saanich-Gulf Islands, where she is taking on Gary Lunn, the Conservative minister of state for sport.

It's the third riding for Ms. May in her bid for a seat after an unsuccessful run against Defence Minister Peter MacKay in Nova Scotia in 2008 and an earlier by-election loss in Ontario in 2006.

Ms. May, 56, said she moved to Sidney, B.C., from Cape Breton, N.S., in 2009 because her daughter had finished high school and the West Coast riding was her best shot at making history by becoming the Green party's first elected MP.

"The Green party did massive amounts of research with two major national polling companies that determined that of all the ridings in the country Saanich Gulf Islands was the place most likely where the voters were most aligned with our values.

She said the party began knocking on doors 18 months ago and is well positioned to gain voter support.

"This is a two-way race between Gary Lunn and me," she said. "Gary Lunn is still slightly ahead. The Liberals and NDP are well behind."

Ms. May said she is bolstered by the election of the first Green members of parliament last year in the United Kingdom and Australia, but Canada's first-past-the-post voting system works against her party.

During the last federal election in 2008, the Greens won more than 937,000 votes, 6.8 per cent of the total, but ended up without a seat in the House of Commons.

Richard Johnston, a political science professor at the University of British Columbia, said Ms. May's biggest challenge is that her party can't cash in its votes for a seat because of the first-past-the-post system that favours regional parties like the Bloc Quebecois.

"She has to worry that this election will be more polarized than previous ones," Mr. Johnston said.

"There's a sense in which it's either majority government or not and both the NDP and Liberals, I think, are extremely anxious to concert their efforts to the extent they persuade voters that this is the central thing. And the Greens could get swept aside."

The Green Party could also continue to be seen as a single-issue environmental party, which won't garner votes, Mr. Johnston said.

"The environment's everywhere. If you've got a modest electoral base on a set of issues that's pervasive and universal it's hard to turn that into a seat anywhere."

Ms. May said that if she is elected she will be relentless in promoting greater civility, co-operation and accountability in Ottawa.

"Democracy can't survive in a toxic soup of negativity," she said. "It kills democracy at its roots and it makes people turn away and not vote."

Starting Monday, the Greens will begin a week-long effort to challenge the other federal parties to work together on issues that affect all Canadians, Ms. May said.

She said she will tape a video challenge for the other party leaders every morning and that it will be posted on YouTube and emailed to newsrooms.

"I'm quite personally distressed, desperate to find a way to change the approach," she said. "On the opening day of this election campaign we've had every other party leader call at least one of the party leaders a liar. Except me. I won't do that."

Ms. May said social media will play a pivotal role in her "techno-savvy" campaign and to cut down on carbon emissions she will post video announcements on the Internet instead of travelling.

She said her limited train trips outside the riding will include a few stops in major cities and the national leaders' debate in Ottawa.

Her party will also post young activists' spoken poetry on the Internet in an effort to draw the youth vote, Ms. May said.

The Greens will attract seniors by aiming to protect pensions and also focus on environmental issues such as support for local farmers, the continued ban on oil tankers in West Coast waters and protection of wild salmon 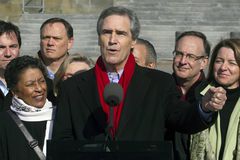