Organizations founded by an American oil baron and a Silicon Valley philanthropist are among the foreign charities being targeted by Enbridge in its battle against critics of the proposed Northern Gateway pipeline.

Tens of millions of dollars have been donated to conservation groups and initiatives in B.C., for everything from Earth Day celebrations to aboriginal salmon recovery programs.

It's a point of contention for the pipeline proponent, which has asked the environmental review panel examining the Northern Gateway project to compel funding information from its critics. The panel returns to B.C. this week for final hearings on the controversial project.

And it's a point of contention for Natural Resources Minister Joe Oliver, who earlier this year decried the "foreign special interest groups" that "threaten to hijack our regulatory system to achieve their radical ideological agenda." Specifically, Enbridge has singled out in requests submitted to the panel:

The Bullitt Foundation has awarded almost $1-million over the past 16 years to the David Suzuki Foundation and $735,000 over 13 years to the environmental law group EcoJustice.

In August, the Moore Foundation announced $2-million over the next three years for the World Wildlife Fund Canada.

Calls to Enbridge Northern Gateway seeking comment were not returned.

"The reason why the Moore Foundation is particularly interested in Canada in terms of environmental conservation funding is because, essentially, salmon and marine systems are collapsing around the world and here in Canada there's a chance to do it differently," said Mr. Thompson, who is based in Vancouver.

Enbridge is trying to undermine the credibility of its critics, he said.

"We've known that Enbridge has an issue with those communities on the coast having the resources to undertake planning, it seems. We would assume that they are continuing to find ways to try and silence voices they don't like."

Enbridge raised $100-million just to get the project through the environmental review process, Mr. Thompson said.

"The money involved here from charities is nothing compared to that," he said.

Thompson said the Moore Foundation was even a sponsor of an innovative ocean management plant in conjunction with the federal government – until Enbridge raised objections.

"The proponent, as well as the oil and gas and shipping industries, are concerned that ongoing third-party funding provided to the initiative will influence the Integrated Oceans Management plan, as well the outcomes for the panel review of the project," said an 2011 internal Fisheries and Oceans update on the project.

The Conservative government cancelled its funding of the project a year ago.

And Thompson pointed out that British Columbians still don't know who all of Enbridge's partners are in the pipeline project. The Northern Gateway Pipeline is structured as a limited partnership, with Enbridge having a 50 per cent stake. The remaining stake belongs to 10 private investors, four of whom remain confidential.

According to documents filed with the National Energy Board, the others are: French oil company Total; Suncor(TSX:SU); MEG Energy; Cenovus(TSX:CVE); Nexen(TSX:NXY), the Calgary company at the centre of a takeover bid by Chinese state-owned China National Offshore Oil Co.; and Sinopec, China's largest oil company.

The international funding for environmental causes pales in comparison to the funds these partners have put up to get through the regulatory process, said Sarah Goodman, vice-president of business development for Tides Canada.

"This is an attempt to distract from the real issue, which is the very legitimate concerns that British Columbians and Canadians have about a potential pipeline being built through part of the largest intact coastal temperate rain forest on the planet," she said.

Art Sterritt, executive director of Coastal First Nations, said his group has had to "scrape together pennies" to participate in the lengthy review process.

"We're not even sure we can afford to go there right now, despite the fact that Joe Oliver thinks there's buckets of money coming from somewhere." 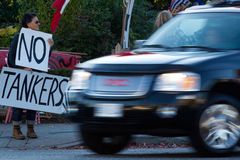 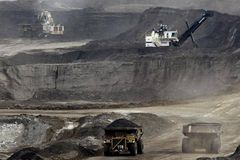 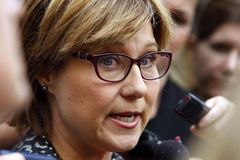