Outgoing Ethics Commissioner Mary Dawson says she "went out with a bang" with her conflict ruling on Justin Trudeau's Bahamas vacations.

In an exclusive exit interview with The Globe and Mail in her downtown Ottawa office, Ms. Dawson defended her record as Canada's ethics watchdog and provided rare insight into her work, including her recent ruling that Mr. Trudeau violated four sections of the Conflict of Interest Act over two trips to the Aga Khan's private island in the Bahamas.

Ms. Dawson, who retires on Monday after more than a decade on the job, also said she had no idea that Finance Minister Bill Morneau was going to introduce pension-reform legislation that could benefit the firm founded by his father and in which he still owned one million shares – a matter now under examination by her office. At that time, Mr. Morneau hadn't put his assets into a blind trust, raising conflict-of-interest allegations.

Ms. Dawson is leaving her post having made a historic finding against a sitting prime minister while handing off another hot-button file to her successor, Mario Dion, who starts in the role on Tuesday. The House of Commons ethics committee is meeting next week and the opposition Conservatives want the Prime Minister to testify on the ethics ruling.

"I kind of went out with a bang," she said. "But I mean I've been working diligently for 10 years on all sorts of things and I've had lots of interesting and important decisions."

Although her long-awaited Trudeau report was seen as hard-hitting and clearly rattled the Prime Minister, Ms. Dawson said she doesn't think there should be additional penalties against politicians who break ethics laws. (There are currently fines of up to $500 for failing to meet deadlines.)

"There is a significant consequence. Everybody noticed. It got lots of media attention …The fallout of it is in the long run, at the electorate," Ms. Dawson said.

"The shame, in a sense, of having erred."

She also defended the pace at which she worked on her report, which took almost a year to complete, pointing out that she was looking into many different issues and had to interview a dozen people, including Mr. Trudeau on two occasions.

Ms. Dawson also confirmed what Mr. Morneau's office has already made public: She was not approached before he introduced the pension bill, C-27, which would allow for a new type of pension called target benefit plans. Human-resources company Morneau Shepell, of which Mr. Morneau was executive chair before entering politics, has praised the legislation as a "positive step."

"I didn't know anything about that bill," Ms. Dawson said.

She said she expects Mr. Dion to continue with the examination of Mr. Morneau. "If I've started them, I obviously thought they should be investigated," she said.

Ms. Dawson defended her office's decision to advise Mr. Morneau that it was not necessary to place his assets in a blind trust, even though he previously said he would. "Legally it is not required. I stand behind that advice," she said.

But she added she was always open to more discussions with MPs. "If somebody had come and asked for the utmost protection, I probably would have it discussed with them," she said.

Ms. Dawson, however, said a blind trust might not necessarily be the best route in any event.

"If you've got a huge set of holdings in one area and you put it in a blind trust, what do you think is in your blind trust?" she said. "You know what the hell's in there. That's a defect on a blind trust. You've got to have other measures around the blind trust, like conflict screens."

She also noted that for years she has advocated for Ottawa to plug a loophole that allows MPs to place their assets or shares indirectly through a holding company.

Ms. Dawson, a constitutional lawyer and career bureaucrat, was appointed by the Stephen Harper government in 2007 as the country's first ethics commissioner under the federal Conflict of Interest Act. Plucked from retirement for a seven-year term, her position was extended four times, once by Mr. Harper and three times by Mr. Trudeau.

"It means I can't be a senator," she said, referring to the mandatory age of retirement in the Red Chamber. "But I'll figure something out. I still feel full of vim and vigour, and I'm up for whatever."

She said she's proud of her various rulings, even those that didn't find wrongdoing but ended up leading to change, such as ending the Conservative practice of putting the party's name on cheques.

But she was criticized at times for being too slow and focusing her attention on seemingly minor matters. Her office was also lambasted last year for sowing confusion over how many Trudeau cabinet ministers held publicly traded shares instead of divesting them through a blind trust or sale.

Her office repeatedly gave the answer of "fewer than five," before finally revealing there were two: Mr. Morneau and Justice Minister Jody Wilson-Raybould, who had sold her shares.

"We didn't want to be the cause of a witch hunt to find two ministers," Ms. Dawson said. "Why did they want the exact number? They wanted to go … after whoever the heck it was."

She added that the situation was "shifting at the time," suggesting more ministers may have been selling or divesting shares.

Over all, Ms. Dawson said she's learned that there's "not an awful lot of bad stuff going on."

"People keep wanting these horrible, fraudulent activities being done by people," she said.

"Did it ever occur to them that people are pretty good?"

Editor’s note: An earlier version of this article on outgoing ethics commissioner Mary Dawson incorrectly said her term has been extended twice. In fact it was four times. 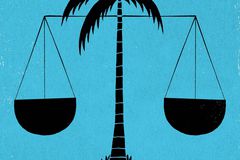