The Conflict of Interest and Ethics Commissioner is investigating Prime Minister Justin Trudeau's family holidays at the home of the Aga Khan, the billionaire Ismaili Muslim leader who owns a private island in the Bahamas.

The revelation is increasing the pressure on Mr. Trudeau to provide a full account of the trip and his plans to deal with any potential conflict of interest, but he refused to provide more details on Monday during his cross-country tour.

"I've heard from a number of people across the country that they are concerned about this, and that is why I take this very seriously and I'm happy to respond to all questions that the ethics commissioner and others may have," Mr. Trudeau said in an interview on FM 95.7 in Halifax.

Globe editorial: Why was the PM's vacation a secret?

Andrew Cohen: Trudeau's friendship with the Aga Khan should be celebrated, not hidden

Speaking to CBC Radio in Halifax, Mr. Trudeau added he was confident that "all of this will be ironed out" in discussions with the commissioner, Mary Dawson.

In a letter to Conservative MP Blaine Calkins on Jan. 13, Ms. Dawson acknowledged concerns about two potential breaches to federal rules related to the trip: the fact that the Aga Khan's foundation lobbies the federal government, and Mr. Trudeau's use of his host's private helicopter to reach the secluded residence.

Ms. Dawson said Mr. Calkins' request "satisfies the requirements" of the section of the Conflict of Interest Act that allows MPs to ask the commissioner to weigh in on potential breaches by other members of the House.

She said she has "commenced an examination … to determine whether Mr. Trudeau has contravened" the act in relation to his "recent stay at and travel to the Aga Khan's privately owned island."

The Aga Khan's foundation has received $300-million in Canadian international development funds and is registered to lobby the foreign affairs department.

Mr. Trudeau and his family flew to Nassau aboard a government Challenger jet in late December. He was joined on the vacation by Liberal MP Seamus O'Regan and his husband, as well as Liberal Party president Anna Gainey and her husband, Tom Pitfield, president of the Canada 2020 think-tank.

Mr. Trudeau's Open and Accountable Government rules state that "ministers and parliamentary secretaries must not accept sponsored travel … this includes all travel, non-commercial, chartered or private aircraft for any purpose except in exceptional circumstances" without the approval of the ethics commissioner.

NDP Leader Tom Muclair called on the commissioner to rule quickly on the use of the private helicopter, saying the breach is clear.

"The Prime Minister has every right to take a vacation. However, like all other Canadians who take vacations, he does not have the right to break the law," Mr. Mulcair said in a letter to Ms. Dawson on Monday.

Liberal officials are expected to use a number of exceptions in the Conflict of Interest Act to defend Mr. Trudeau's trip.

For example, politicians have more freedom to accept gifts from long-time friends than from other individuals. This explains why Mr. Trudeau has publicly stressed that he has known the Aga Khan since he was a toddler.

In addition, Mr. Trudeau had 30 days to register the gift with the ethics commissioner, so he still has time to do that if necessary.

The file is currently managed in the Prime Minister's Office by two lawyers who act as senior aides to Mr. Trudeau, Cyrus Reporter and Mathieu Bouchard. 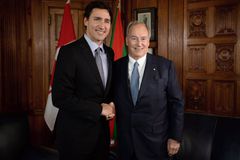 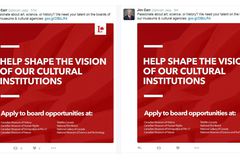