Former Conservative MP Chuck Strahl has resigned as a director of the Pierre Elliott Trudeau Foundation in the wake of revelations that a $1-million donation to the organization and the University of Montreal was made by senior apparatchiks in Chinese state-run organizations whose purpose is to project Beijing's influence abroad.

In a resignation letter, Mr. Strahl says what actually prompted him to quit is that Liberal MPs are invoking his directorship in their defence of the contribution, which includes $50,000 to go toward erecting a statue of the former prime minister in Montreal.

"I cannot allow them to imply that my position with the foundation somehow justifies their actions," Mr. Strahl, a onetime cabinet minister in the Stephen Harper government, wrote to foundation president Morris Rosenberg.

"While I have always supported the goals of the foundation to promote discussion of and education in the humanities, I am unwilling to be used as a foil for the Liberal Party of Canada, [which] has chosen to use my participation in foundation activities as some sort of cover for their own questionable conduct," Mr. Strahl.

In the Commons Wednesday, Fisheries Minister Dominic LeBlanc tried to deflect criticism of the foundation by telling Conservative MPs to ask Mr. Strahl, as a director, what he thought of the foundation and its avowed independence.

"Since my role as a director has been raised by representatives of the Liberal Party of Canada on the floor of the House of Commons, it has now become a political football that I wanted no part of," Mr. Strahl said in his letter.

The $1-million donation has become intertwined with controversial Liberal Party fundraisers because one of the donors, as The Globe and Mail reported, showed up at a $1,500-a-ticket event on May 19 in Toronto where Prime Minister Justin Trudeau was the star attraction.

Zhang Bin, a wealthy Chinese businessman, attended the dinner. He was one of three guests who are senior players in Chinese state-controlled entities, including the China Cultural Industry Association, which aims to build influence for Beijing abroad.

Mr. Trudeau has defended the meetings by saying he is trying to attract investment to Canada.

The only known investment that followed the fundraiser – just weeks later – was a $1-million donation to the Trudeau foundation and the University of Montreal's law faculty from Mr. Zhang and Niu Gensheng, another wealthy Chinese businessman. Mr. Zhang attended the fundraiser but, as a foreign national, did not give any money to the Liberal Party.

The pair said the donation was made "to honour the memory and leadership" of the Prime Minister's father. The contribution includes $200,000 to the foundation and $50,000 for a statue of the elder Trudeau, who as prime minister opened diplomatic relations with China. Another $750,000 will fund University of Montreal Faculty of Law scholarships, which include grants for Quebec students to visit China.

Charles Burton, a leading expert on China, said the $1-million donation appears to be designed to curry favour with Mr. Trudeau.

Former NDP MP Megan Leslie also sits on the Trudeau foundation board and Liberals have also cited her name when defending the organization – suggesting their NDP critics in the Commons ask a former colleague on the foundation what she thinks of it.

Ms. Leslie came out in defence of the foundation Thursday, saying she regrets that her name and position was dragged into the political debate.

"I will remain on the board of the Pierre Elliott Trudeau Foundation. The foundation's work on human rights and dignity, environment, citizenship and Canada's role in the world is needed now more than ever," Ms. Leslie said.

On Thursday, the Liberal-dominated Commons ethics committee adjourned debate on an opposition motion to summon Liberal fundraiser Jon Dugal to explain his role in organizing cash-for-access events with Liberal ministers. The NDP and Conservatives are working together to try to move it forward when the committee next meets.

"It is almost as if they had something to hide," NDP Leader Tom Mulcair said in the Commons. "These sunny days are, indeed, getting shorter and shorter."

Mr. Zhang recently bought Quebec's Château Montebello hotel, but he is also a force for the spread of Chinese soft power as president of the China Cultural Industry Association. Its top-tier members include senior figures in the People's Liberation Army, as well as navy and Communist Party bosses. Mr. Zhang is also a member of the Chinese People's Political Consultative Conference, which advises China's rulers.

Mr. Niu, the donor partner in the $1-million contribution, is the founder of China Mengniu Dairy Company Ltd. and heads the China Charity Alliance, which reports to the country's Civil Affairs Ministry.

In 2008, Mengniu was caught up in the massive Chinese milk scandal, in which six infants died and tens of thousands were taken to hospital after melamine was added to milk and infant formula, presumably to fool government protein tests.

On Thursday, Mr. Trudeau told reporters he has no ties to the foundation. "I have not been in any way associated formally, or informally, with Pierre Elliott Trudeau Foundation in many, many years," he said after arriving in Liberia for the first leg of a trip to Africa.

Liberal Party spokesman Braeden Caley said the party has nothing to do with the foundation. "The Liberal Party of Canada is not privy to any discussions related to the Pierre Elliott Trudeau Foundation or the University of Montreal, and the party does not have knowledge of private contributions being made to either of those institutions."

Mr. Strahl said the Trudeau Liberals should start "having a look in the mirror" and abandon the cash-for-access fundraisers, as Premier Kathleen Wynne's Liberals did in Ontario.

Conservative MP Marilyn Gladu said the Liberal defence in this matter is unsupportable. 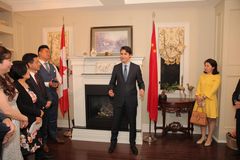 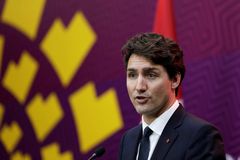