Former Alberta premier Alison Redford has cut all her ties to provincial politics amid calls from her successor for an RCMP investigation into her travel expenditures and alleged misuse of government flights.

An extraordinary day for the province began on Wednesday with an article by Ms. Redford in Alberta's two largest newspapers in which she said she is giving up her seat in the Calgary-Elbow riding, months after resigning as premier. It was a momentous comedown for the first female premier in Alberta history, who took power in 2011 with great promise and hope.

By late in the day, political allies and rivals were agreed that the Auditor-General's report on the former premier's travel expenses, due out on Thursday, is cause for an RCMP probe that could lead to criminal charges.

Ms. Redford did not write or talk about an investigation, nor did the RCMP say it was ready to begin one. In Ms. Redford's farewell article, she acknowledged she had made mistakes, but provided no details.

Premier Dave Hancock held a conference call with the media and said he was going to ask the RCMP to get those details. Ms. Redford did not respond to Mr. Hancock's remarks.

"I think this is the prudent thing to do in circumstances of this nature," said Mr. Hancock, who will have the Minister of Justice and Solicitor-General request an RCMP investigation as soon as Auditor-General Merwan Saher makes his findings public on Thursday.

"While this is a difficult decision for me, I am extremely disappointed to learn of Ms. Redford's actions while premier," Mr. Hancock said. "I had great respect for her and great hope for the promise she showed early in her tenure."

A portion of the Auditor-General's report has already been obtained by the CBC, and it said Ms. Redford's staff routinely booked passengers on some flights and cancelled them late so the premier could fly alone. Earlier this year, it was revealed that Ms. Redford spent $45,000 to attend Nelson Mandela's funeral in Africa. She also spent $3,100 to have her daughter and a friend fly with her on different occasions.

Ms. Redford repaid the combined $48,100, but it did not soothe the irritation over allowing her staff to arrange flights to her advantage.

On Wednesday, many Tories took pains to distance themselves from Ms. Redford.

Jim McCormick, the PCs' Alberta president, said Ms. Redford had a promising start to her time as premier in 2011 only to lose it to self-serving tendencies.

"Unfortunately, it was her own personal choices that led to her demise," Mr. McCormick said in a statement. "She is alleged to have broken government rules, and taxpayer dollars were not treated with the dignity and respect they deserve. She has paid a personal and political price for her mistakes."

Alberta Liberal leader Raj Sherman agreed the RCMP needs to investigate because, "Albertans have a right to know what happened to their money, who gave the order for these abuses." Mr. Sherman said Doug Horner should be questioned because he is the minister responsible for the government planes and how they are used.

Ms. Redford's former chief of staff insisted there is more than enough blame to go around.

"It's sad to see the PC party, and the premier, turn on the former premier," Stephen Carter said. "Other cabinet members knew [of Ms. Redford's travel], the caucus knew, and no one stood up."

In her resignation article, Ms. Redford wrote, "I will leave it to others to analyze and comment on the past. I am sure that I will be asked to weigh in, but I will respectfully decline.

"It is time to move forward.

Ms. Redford has previously said she would not accept the $179,000 transitional payment she is due as a former MLA. The 49-year-old former lawyer said she and her family will continue to live in the province. Her plan is to teach and resume working in international development and public policy.

Opinion
Don’t count out the Alberta PCs just yet
July 4, 2014 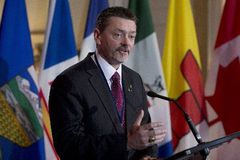 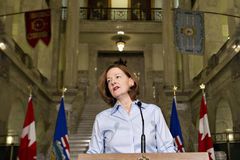 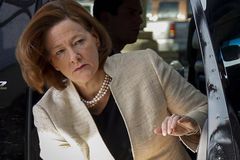 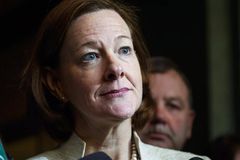