For those who have lived and breathed the federal election campaign – the people seeking office, staff and volunteers helping them, journalists covering them – its 78 days have been endless and exhausting.

The fact is, though, the vast majority of Canadians don't live and breathe campaigns. And we are overdue to acknowledge that, for all the griping along the way, the epic span of this marathon proved a blessing for the broader electorate – one that has offered voters a better chance to make an informed choice than they have had in many election cycles.

Yes, it has come at a higher cost to the public purse than if it had lasted the more standard five weeks, at times the debate has been unseemly, and the bombardment of campaign ads may have gotten a little grating.

But shorter, cheaper writ periods come at a cost, too. They run the risk of the race being hijacked by a single issue or controversy that crops up at the right time. They can also allow leaders to skate by on relatively few talking points, and sometimes end just as many voters are starting to pay attention.

This time, a rather remarkable range of subject matter has gotten its due airing. Weeks have been devoted to ethical lapses under Stephen Harper's watch, the handling of the Syrian refugee crisis and religious accommodation. The Trans-Pacific Partnership trade agreement, pipeline policy, merits of the Clarity Act, peculiar candidate controversies, indications the Liberals have not entirely gotten beyond their own ethical challenges – all have gotten at least a few days. And there has still been a whole lot of time for the parties to scrap over disagreements about whether the government should run deficits, whose tax policy would be fairest and the current state of our infrastructure.

Considering that prime ministers' mandates tend to be defined less by what they originally campaigned on than by how they respond to the unforeseen, that array of topics has provided a useful test of the leaders' mettle – particularly when it comes to the Liberals' Justin Trudeau and the New Democrats' Tom Mulcair, about whom few Canadians really knew much previously.

The move from just a couple of leaders' debates to five of them further forced the would-be PMs out of their comfort zones. An entire debate was devoted to economic policy, and another (even more unusually) to foreign policy. Each debate had a different format, which threw the participants slightly off balance. There was less risk than usual that a single performance would disproportionately help or hurt one of the leaders; Mr. Trudeau had to go out and prove himself again after exceeding expectations in the first debate, and after failing to meet them, Mr. Mulcair had several opportunities to make up for it.

It's a shame that some of the debates – notably the economic and foreign-policy ones – were not available to television viewers on mainstream networks. (The CBC, in particular, might usefully do some soul-searching.) But we are also in an era in which more and more consumers of media customize their content. If you were interested in watching a debate, you had more choice in both timing and content than in elections past. And, really, that applied to tuning in to the campaign in general.

The received wisdom about our campaigns is that only the political junkies pay close attention in the first half, with most people properly engaging (if at all) in the last couple of weeks. In 2015, it has felt more as though different voters have engaged at different times along the way, or picked their spots according to their interests and whatever else is going on in their lives. At the local level, candidates have had more opportunities during the writ period to catch constituents at home.

Because of all that opportunity to take the measure of parties and leaders, as they have gone through an endurance test in which each has experienced highs and lows, there is little left hanging. This time, unlike several instances in the recent past, there will be no narrative that if the race lasted a week or two longer, the outcome might be different.

That we wound up with a campaign more than double its usual length was not an act of pure altruism on Mr. Harper's part. He sent us down this path largely because his Conservatives were concerned about a late-summer barrage of union advertising against them, and the dropping of the writ meant strict limits on third-party spending. The Tories also had more money in the bank, so the prorating of party-spending limits to the campaign's length stood to benefit them. And both the longer campaign and the increased number of debates were partly aimed at exposing Mr. Trudeau, who was expected to struggle the harder it got for him to stick to script.

Among Conservatives, there may be some second-guessing of that strategic gambit. They might wonder if it was wise to have Mr. Harper on the campaign trail during the Mike Duffy trial in August. The debates seemed to help Mr. Trudeau considerably more than they hurt him. The Liberals' heavy advertising in August, which played a big role in reviving their party's fortunes, was facilitated by the spending rebates that kicked in once the campaign officially began.

But regardless of Mr. Harper's motivation in more than doubling the campaign's length, voters were well served. And if it turns out to have contributed to the incumbent's defeat, we should hope his successor follows his precedent anyway. 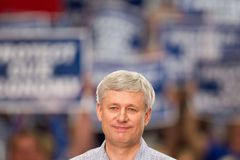