Canadians like the idea of reforming the electoral system but the process of changing it will be rife with controversy. Campbell Clark outlines some of the possibilities and explains which options appeal to the federal parties

An Elections Canada ballot box is shown on federal election day in Montreal, Monday, May 2, 2011. THE CANADIAN PRESS/Graham Hughes

The electoral system will change – at least that's the promise. Now comes the fight over how it will change.

Prime Minister Justin Trudeau came to power promising that the 2015 federal election would be the last to use the traditional first-past-the-post system. He didn't say what will replace it, though he has indicated he favours an instant-runoff system using preferential ballots. But the other parties have different ideas.

That's where things will get controversial. And complicated.

The complications are one reason why so many electoral-reform advocates – and the Liberal government – do not want a referendum on a new voting system. Many Canadians like the idea of reforming the electoral system, but they don't agree on how.

In British Columbia, a proposal to switch to a single-transferable-ballot system fell just short of the required 60-per-cent support in 2005. Another referendum was held in 2009, after explanations of how larger, multimember constituencies would redraw B.C.'s ridings – and support plummeted to 39 per cent. The details bedevilled the plan.

Now comes the debate at the federal level. There are many different electoral systems, and each major party prefers one that it thinks benefits it: The Liberals lean to instant runoffs, the Conservatives want to keep the current first-past-the-post system, and the NDP wants a form of proportional representation.

Liberal leader Justin Trudeau casts his ballot at the polling station as his son Xavier and daughter Ella-Grace watch in Montreal, Quebec, October 19, 2015.

The timelines probably limit the options. The government is forming a parliamentary committee that is to report by Dec. 1, but it has promised legislation by April 19, 2017. That's because Elections Canada needs a long lead time to reorganize elections.

The Conservatives demand a referendum on any reform, but Elections Canada probably could not mount a national referendum and then a 2019 vote under a revamped system. There would not be a lot of time to redraw the riding map to create the multi-MP electoral districts used in many proportional representation systems – a controversial endeavour in itself.

But the debate is coming, with a host of complicated terms – experts sometimes complain the politicians misname their own favourite proposals. Expect those terms to be bandied about extensively now.

How do we vote now?

The status quo for federal elections is first past the post (FPTP). The country is divided into electoral districts, or ridings (there are 338 right now), and each elects one MP. Voters pick their favourite candidate, and the candidate with the most votes wins the seat. 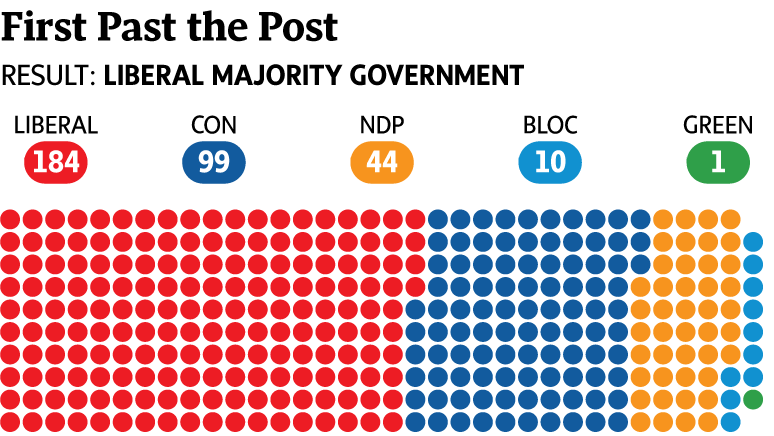 So what's the problem?

There are many, but people differ over which ones are important.

With FPTP, candidates can sometimes win a seat with far less than a majority of the votes, especially when there are many candidates in the race. Jean-Yves Duclos, the Minister of Families, Children and Social Development, won his Quebec seat with 28.9 per cent of the vote.

Over all, the proportion of seats each party wins does not usually match the proportion of the vote they garnered – typically, the bigger parties are overrepresented. In 2011, Stephen Harper's Conservatives won a majority of seats with less than 40 per cent of the vote; in 2015, Justin Trudeau's Liberals did too.

And some worry about "wasted" votes: A Liberal in rural Alberta, or a Conservative in downtown Toronto, might feel no point in voting.

What are the options?

Many different voting systems are used around the world.

Dennis Pilon, an electoral reform expert at York University, points out that they usually have three parts: districts, which either elect one member or many; ballots, on which voters choose a candidate or a party, either by selecting one or ranking several in order of preference; and an allocation, which dictates how the votes are translated into seats.

Winner-take-all systems tend to appeal to those who like the idea of one and only one representative, like an MP, representing each defined district.

But the current first-past-the-post system isn't the only way to do that. France's presidential elections, for example, use two-round voting, also known as a "double ballot," or a runoff. The top two vote-getters from the first round go to a second-round runoff. In theory, that's supposed to address the problem of a winner who garnered only a small plurality, because a runoff winner must receive more than 50 per cent of the vote.

What is a preferential ballot?

The term is used in many ways, often incorrectly, according to Prof. Pilon. A preferential ballot is really any ballot where candidates rank their preferences, rather than picking just one.

There are several kinds of voting systems that allow voters to register a ranked preference among candidates – but the term "preferential ballot" is sometimes used to refer to one in particular, the alternative vote.

For the instant runoff example, the hypothetical seat count is less exact. Using the actual votes cast as a base, Mr. Fairie approximated what the result could have looked like with an instant runoff model based on second-choice polling data from Nanos Research and Ipsos Reid.

It has also been called instant-runoff voting and sometimes the transferable ballot – not to be confused with the single transferable vote. It has been used in Australia and, at one time, in Canadian provinces such as Alberta.

It's essentially a one-ballot version of the system that political parties in Canada have long used to pick their leaders at leadership conventions. MPs now use it to elect their Speaker.

For the party list example, Mr. Fairie used the D'Hondt method to allocate the riding winners in each province so that a party was given a number of seats proportional to votes the party won in that province. The hypothetical seat count was modelled based on the actual votes cast in the 2015 election. 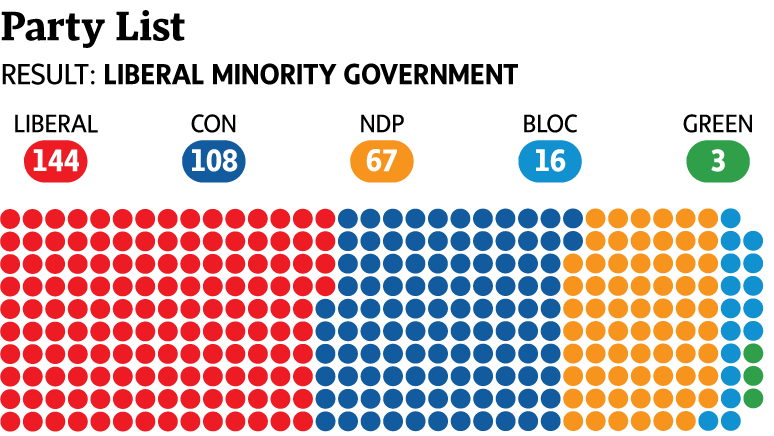 What is proportional representation?

It's a voting system that tries to ensure that parties get a proportion of seats that roughly matches the proportion of the vote they garnered. There are many versions.

" Party list" proportional representation (PR), used in several countries in Europe, is where each party puts forward a list of candidates, usually ranked in order. If the party gets 20 per cent of the vote, it is allocated roughly 20 per cent of the seats; if that works out to, say, 40 seats, then the first 40 people on the party list are elected. In some countries, the allocation is done by region, rather than nationally. But critics complain that it allows parties, rather than voters, more power to choose which politicians sit in the legislature.

The single transferable vote uses ranked ballots, but they are counted in a way that ensures the results provide rough proportional representation. It's a system used, for example, in Tasmania. Voters choose their first, second and possibly more choices. But the votes are counted in a different way. Each candidate needs a "quota" to win election – for example, it could be 20,000 votes. If a candidate has more than 20,000 votes – say 30,000 – the "surplus" second choices are distributed proportionally to other candidates, so that 10,000 "surplus" votes are not "wasted." One downside is that the mechanics of the counting system seem complicated – although Prof. Pilon argues that voters in places such as Tasmania seem to find it simple enough to use.

There are also hybrids, semi-PR systems, and others

They include the single non-transferable vote, where voters get only one ballot, but there is more than one person elected from each riding. If your riding elects four MPs, the four candidates with the most votes are elected.

Another is the mixed-member majoritarian system, where one portion of the legislature is elected directly, perhaps by the first-past-the-post system, and another portion is elected by party list proportional representation. But it's not the same as mixed member proportional representation – in this system, the portion of the legislature elected by PR does not "compensate" to make the whole legislature proportional, so a party might still win 50 per cent of the seats with 45 per cent of the vote.

Do such big changes have to be approved by Canadians in a referendum?

No. At least not in the legal sense. The government can propose a change to Canada's elections laws, and a majority in the House of Commons can pass it. The Senate has to pass it too.

But there are a few small constitutional obstacles. Prince Edward Island, for example, is guaranteed four seats in the Commons. So a PR system that allocated seats beyond provincial boundaries would probably face challenges.

Then there's political legitimacy. Changing the voting system is a big deal, and some form of consensus between major political parties is usually considered important in elections laws. Some believe that public endorsement in a referendum is crucial, especially if there is no all-party consensus. But many electoral-reform advocates are gun-shy: Proposed reforms in Ontario and British Columbia were rejected by voters.