The House of Commons will be mostly absorbed today with the Liberal government's second budget (read the highlights), unveiled yesterday. The fiscal plan has extra money for skills training and a plan to combat gender-based violence, but kicks major tax changes down the road and introduces spending reviews that will take months. Business leaders are wary of the proposed tax review and how it compares to changes coming south of the border, but are generally pleased with how the budget boosts the flourishing tech sector.

The Prime Minister and his cabinet, meanwhile, are scattered to the four winds. Justin Trudeau visits George Brown College in Toronto for a photo-opp, while members of his cabinet are touting the budget across the land, such as Jean-Yves Duclos, Minister of Families, Children and Social Development, in Windsor, Ont., and Infrastructure Minister Amarjeet Sohi in Edmonton.

But MPs do have one other notable vote today: M-103, the controversial motion from Liberal backbencher Iqra Khalid, that condemns systemic racism. The motion may pass in the House, but a new poll from the Angus Reid Institute suggests Canadians are against it.

There was a time when running deficits north of $25-billion a year, with no plans ever to balance the budget, would raise eyebrows. But not, it seems, any more.

Finance Minister Bill Morneau projects a budget deficit of $28.5-billion this fiscal year, which then declines gently to just under $19-billion in 2022. This is fiscally responsible, Mr. Morneau insists, because debt as a percentage of the gross domestic product will remain stable, at 31.5 per cent this year, down to 30.9 per cent in 2022.

Those who have more memories than hopes will remember when Michael Wilson, Brian Mulroney's first finance minister, made the same argument in the 1980s. The first Trudeau governments had run up persistent deficits, made worse by a major recession in 1981. The Conservatives tried to bring the budget into balance but failed, for lack of fiscal fortitude.

But no worries, said Mr. Wilson; the debt-to-GDP ratio is stable, which is all that really matters.

Throughout the mid-eighties that argument seemed reasonable. But then another major recession arrived in 1990, sending deficits and debt through the roof, and leaving Canada on the brink of insolvency. It took years of painful cuts for Jean Chretien and Paul Martin to balance the books.

A new bipartisan orthodoxy emerged: Outside financial crises, budgets should be balanced and the debt-to-GDP ratio should go down, to provide room to manoeuvre when the next crisis arrived. Prime ministers Chretien, Martin and Harper did just that. When the panic of 2008-2009 arrived, Finance Minister Jim Flaherty had ample room to stimulate the economy through deficit financing, though it took half a decade of strict fiscal discipline to bring the budget back into balance.

But this Trudeau government has abandoned that orthodoxy. Deficits are fine, they believe, as long as the debt-to-GDP ratio remains stable. In fact they're desirable, to finance infrastructure and innovation.

This makes perfect sense, because we know there will never be another recession. And the world has nothing to fear from Donald Trump.

Andrew Coyne (National Post): "I have read a good many tedious, empty budgets in my time. I cannot recall ever reading one quite as mind-bendingly empty as this one."

Aaron Wherry (CBC): "Budget has long since become a loose term, in Ottawa anyway. The annual spring exercise functions as more of an elaborate announcement of government priorities with big numbers attached than a detailed accounting of how public funds will be allocated."

Stephen Maher (iPolitics): "[The budget] is long on policy talk – setting the direction for the government on innovation and skills training, for instance. But the part where the government tells you how much money it is going to spend on the policy priorities is missing, because there isn't a whole lot of new money."

Erin Anderssen (Globe and Mail): "Canada's first gender-based budget is like a friend who oozes sympathy over coffee but can't find cash when the check comes: It falls short, but means well."

Konrad Yakabuski (Globe and Mail): "A harsher assessment is that – barely 18 months into their mandate – the Liberals are stuck. They can neither move ahead with their progressive agenda – all Mr. Morneau's recent talk about soaking even more the rich turned out to be just talk – nor turn off the spending taps they opened last year, lest they repudiate more or less everything they proclaim to stand for."

Stephen Gordon (National Post): "Since governments are no better than anyone else – and probably worse – at recognizing the economic potential of new ideas, these funding programs become games in which the goal is to extract rents from the government. To the extent that they promote innovation, it comes from finding new and profitable ways to pitch a proposal so that it fits whatever criteria the governments are using when they fund projects. If anyone in the middle class benefits, it's largely a matter of happenstance, not design."

Linda Nazareth (Globe and Mail): "Ideally, the whole thing will come together as more money, less red tape and more productivity in Canadian industries, but the jury is still out on whether any of that happens."

Chantal Hébert (Toronto Star): "It is possible to construe Morneau's initial budget as a five-year spending plan and this year's instalment as the outline of the next Liberal election platform."

David Parkinson (Globe and Mail): "A government elected less than a year and a half ago on a promise of short-term higher deficits – and a return to balance before the next election – is no longer even talking about balancing the books."

Campbell Clark (Globe and Mail): "And now the Trudeau government waits. The deficits forecast for the next few years are now about as high as they can go without breaking Mr. Morneau's last constraint – the promise they will not increase the ratio of debt to the size of the economy. There was no pretense that Mr. Morneau is even trying to balance the budget. In five years, the deficit is forecast to be $18.8-billion. That's not an enormous deficit, but one that's ever-present: getting it to zero isn't even a target any more." 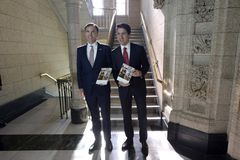 ‘Shaky foundations’ of Trump rally: Market jitters ahead of health vote
Subscriber content
March 23, 2017
Follow us on Twitter @globepolitics Opens in a new window
Report an error Editorial code of conduct
Due to technical reasons, we have temporarily removed commenting from our articles. We hope to have this fixed soon. Thank you for your patience. If you are looking to give feedback on our new site, please send it along to feedback@globeandmail.com. If you want to write a letter to the editor, please forward to letters@globeandmail.com.
Comments