The reopening of a crossborder hotline between North and South Korea, ahead of a crisis summit in two weeks, could aid Foreign Affairs Minister Chrystia Freeland's efforts to find a diplomatic solution to avoid nuclear war, her office says.

Ms. Freeland and U.S. Secretary of State Rex Tillerson will hold a special summit in Vancouver on the North Korean threat on Jan.16 involving South Korea, Japan, India, Britain, France and other countries who fought in the Korean War of 1950-53.

The meeting of foreign ministers is aimed at strengthening pressure and sanctions on Pyongyang and its young dictator, Kim Jong-un, in an effort to get him to come to the table to negotiate an end to the North's nuclear program.

Ms. Freeland's office said the reopening of the long-suspended hotline and the possibility that North Korea will send a delegation to next month's Winter Olympics in the South are positive signs after years of hair-trigger tensions.

"We believe that a diplomatic solution to the current crisis is both essential and possible, and Canada will continue to work with our allies and regional partners, including the United States, Japan and South Korea, in pursuing our common objective of a secure and stable Korean peninsula," Ms. Freeland's press secretary, Adam Austen, said in an e-mail to The Globe and Mail on Wednesday.

Officials in Pyongyang and Seoul conducted a brief telephone conversation over the hotline on Wednesday after the North Korean leader made a rare overture in a New Year's TV address when he offered to open a dialogue over the North's possible participation in the Winter Olympics, which begin Feb. 9.

There was no immediate U.S. comment on the reopening of the hotline, although State Department spokeswoman Katina Adams said Washington remained in close contact with Seoul "about a unified response to North Korea."

She said that as South Korean President Moon Jae-in had stated, "the improvement of relations between North and South Korea cannot advance separately from resolving North Korea's nuclear program."

The hotline telephone call came just hours after U.S. President Donald Trump used a tweet to taunt Mr. Kim, boasting about the size of his nuclear button. In the North Korean leader's New Year's Day address, Mr. Kim said he had a nuclear button of his own on the desk of his office.

"I too have a Nuclear Button," Mr. Trump tweeted, "but it is a much bigger & more powerful one than his, and my Button works!"

Fears of a nuclear conflict between the United States and North Korea have risen in recent months with both leaders firing angry taunts at one another, and Mr. Trump mocking Mr. Kim as "Rocket Man."

Admiral Mike Mullen, former chairman of the Joint Chiefs of Staff, told ABC News this weekend that he believes the world is closer than ever to nuclear war on the Korean Peninsula.

China has played a role in trying to reduce tensions and urged the North and South to use the Winter Olympics as an opportunity to improve ties and make concrete efforts toward alleviating the crisis.

Ms. Freeland's office said Canada would not stand in the way of efforts to involve the North in the Olympic Games.

Some analysts worry that North Korea's willingness to talk to Seoul could be an attempt to drive a wedge between the United States and its South Korean ally. Others say the talks could help restrain Mr. Kim.

Prime Minister Justin Trudeau has expressed concern about the rogue state's ability to launch intercontinental missiles that could cross through Canadian airspace. But the Liberal government has so far resisted calls from the Conservative Party to join the U.S. ballistic-missile defence shield that is designed to shoot down incoming missiles aimed at North America.

North Korea launched its most powerful intercontinental missile in late November, which was capable of reaching targets as far away as 13,000 kilometres, putting Washington and all Canadian cities within striking distance.

Ms. Freeland has said it is still unclear whether the Hwasong-15 missile, carrying a superheavy nuclear warhead, could survive atmospheric re-entry and hit a target in North America. 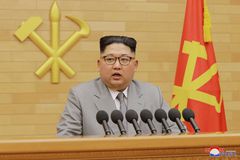