New Democrats who believe they have what it takes to lead their party into the next federal election are making their candidacy official in time to take part in the first leadership debate, scheduled for the second Sunday in March.

That contest among the hopefuls to replace Tom Mulcair will take place in Ottawa, followed quickly by debates in Vancouver, Sudbury, Halifax, Saskatoon, Victoria, Toronto and two in Montreal.

But missing from the busy schedule of NDP leadership events that runs through to September, the month before the vote, are any similar debates in Alberta, the only province where the New Democrats form government.

Officials with the federal party say nothing should be read into the fact that neither Edmonton or Calgary will see a verbal sparring match between its candidates.

"There is also presently no debate scheduled in Manitoba, where we recently held government," said Robert Fox, the NDP's national director. "We will be working with Edmonton ridings in the hopes of having local groups host leadership events, as we will with ridings across Canada, but we also understand that we will be unable to host leadership debates in every area of the country."

But, at a time when Alberta's economy is suffering from the loss of resource jobs, a debate among New Democrats who oppose pipelines and might even argue that the oil should be kept in the ground could be more than a little awkward for NDP Premier Rachel Notley and her provincial government.

As much as the federal NDP wants to build on the success of its lone Alberta MP, Linda Duncan, and as much as Mr. Mulcair had hoped Ms. Notley's win just a few months before the last federal election would bolster his own chances, the New Democrats in the province and their federal counterparts are negotiating a delicate balance.

"When they announced where the leadership debates were going to be held, I thought it was interesting, because Alberta is the only province with an NDP government in Canada," said Dave Cournoyer, the writer of a popular, politically progressive blog who lives in Edmonton.

On the other hand, Mr. Cornoyer said, some New Democrats hold bad memories of Edmonton. It was there that party members voted last spring to replace Mr. Mulcair. And, he said, there is "the divide between the Alberta NDP and the federal NDP on issues like pipelines, which is a huge issue here in Alberta."

More than any other political party, the lines between the federal and provincial New Democrats are blurred.

"The federal and provincial party co-operate and share resources very actively, always have," said Brian Fleck, a former federal NDP candidate in Edmonton-Riverbend who has also run provincially and worked on campaigns at both levels. "We share software and a lot of the same staff that bounce back and forth," he said.

But "the issues on the federal level and the provincial level are different," he said. "If you draw a circle around Alberta, we are a resource economy and we've got an NDP government."

Mr. Fleck said Ms. Notley has met the needs of an oil-based economy while establishing climate-change targets that have set a standard for North America. "I think that is an amazing piece of leadership," he said.

But the federal message has to target different voters, Mr. Fleck said. "You've got 10 provinces and they're not all oil-based economies," he said, "so there's going to be a leader that needs to balance the needs of all the different provinces that sometimes have different views on these things, and I think that would be challenging."

Certainly it has been a challenge for Mr. Mulcair, who went to Edmonton several times during the 2015 campaign in search of votes but has said the proposed Keystone XL oil pipeline is a massive error for Canada and called the approval of a plan to expand Kinder Morgan's Trans Mountain pipeline a "betrayal."

Ms. Notley, on the other hand, was praised by Prime Minister Justin Trudeau when the Trans Mountain and Enbridge's Line 3 replacement to the U.S. Midwest got the federal thumbs-up.

The federal NDP "can be a little bit more idealistic when they are the official opposition or the third party in the House of Commons," Mr. Cornoyer said, "but when you are in the government, there are realities. You have to be pragmatic in order to get things done. So I think that's a significant divide between the Alberta NDP and the federal NDP." 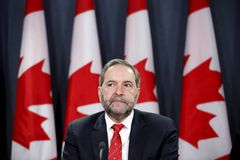 B.C. MP Peter Julian launches NDP leadership bid
February 12, 2017
Ex-union leader Sid Ryan considering NDP leadership bid
January 23, 2017
Follow Gloria Galloway on Twitter @glorgal
Report an error Editorial code of conduct
Due to technical reasons, we have temporarily removed commenting from our articles. We hope to have this fixed soon. Thank you for your patience. If you are looking to give feedback on our new site, please send it along to feedback@globeandmail.com. If you want to write a letter to the editor, please forward to letters@globeandmail.com.
Comments