The guest list isn't firmed up, the date and location are still to be determined.

But the government is billing a major international meeting it will host on the North Korea nuclear crisis as an essential, overdue step towards bringing key players together to brainstorm a non-military solution.

As to what that solution might be – nothing firm.

The meeting will likely occur somewhere in Canada, sometime early next year.

Foreign Affairs Minister Chrystia Freeland and U.S. Secretary of State Rex Tillerson, have been discussing plans for the meeting for months. But they chose to announce it late Tuesday after North Korea carried out its longest-ever missile test.

Freeland couldn't say what Canada's specific role would be but she said convening the meeting was an important step "in terms of showing the unity of the international community in applying pressure on North Korea."

Canada offers what amounts to a less stressful setting for the talks, a senior government official said Wednesday on the condition of anonymity because they were not authorized to speak publicly.

"It makes sense we could bring together people that may not necessarily feel that they would want to go to the United States," the source said, adding that holding talks in Japan or South Korea is simply too close to the crisis.

Tillerson saw the value in Canada taking the initiative forward, the source said.

"We have a lot of strong connections to countries in the region that could potentially be affected and are affected by this threat every day," said the official.

Canada has a history in the region, where it fought in the 1950-53 Korean War, but it is also a non-nuclear power.

Freeland said her Chinese counterpart would be among the invitees.

The meeting, which will be co-hosted by the United States, will potentially involve the foreign ministers of close to two dozen countries.

China and Russia are permanent members of the United Nations Security Council, which held an emergency meeting about North Korea on Wednesday, amid wider calls for more sanctions against the country.

Canadian officials had no comment on whether Russia would be receiving an invitation. Moscow denounced the latest North Korean test as a provocation that would hurt the chances of finding a political solution.

Canada has no diplomatic relations with North Korea, which has raised questions whether it has any meaningful contribution to make.

"We've not been seen as an interlocutor on North Korea," said David Mulroney, a former Canadian ambassador to China.

"One of the problems with diplomatic isolation is we tend to be a long way from understanding or having insights we can bring to the table."

But he added: "It is useful to remind people that we share values and security interests with the United States."

Freeland isn't travelling with Prime Minister Justin Trudeau to China next week, so officials don't expect the North Korea summit to be a major topic of discussion. However, Freeland said she discussed the planned meeting in great detail with Chinese Foreign Minister Wang Yi at the recent APEC summit in Vietnam, and has been shopping it around to other key countries.

U.S. President Donald Trump spoke Wednesday with Chinese Premier Xi Jinping and "emphasized the need for China to use all available levers to convince North Korea to end its provocations and return to the path of denuclearization," according to a White House statement.

Andrew Leslie, Freeland's parliamentary secretary, said the countries that fought alongside Canada during the 1950-53 conflict are on the potential guest list.

"By presenting a united front, by discussing the various options out on the table, by listening to the wisdom, the local wisdom of the regions and especially who live a bit closer to Korea than we do, you can come up with some better ideas," Leslie said.

A recent analysis by the U.S. Council on Foreign Relations posited one possible scenario that the world community could adopt to curb the nuclear ambitions of Kim Jong-un's regime. Canada wasn't mentioned.

All countries, especially China, need assurances "that joining Washington to pressure North Korea, even at the risk of the Kim regime's collapse, will not sway the regional balance of power in a manner that undercuts any one state's fundamental interests," she wrote.

They also need to send a firm message to North Korea "that it can no longer rely on the strategic gaps between its neighbours" to pursue both nuclear weapons and economic development. 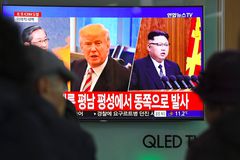 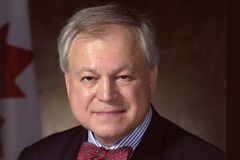 As North Korea missile threat grows, Canada to host foreign ministers
November 28, 2017
Report an error
Due to technical reasons, we have temporarily removed commenting from our articles. We hope to have this fixed soon. Thank you for your patience. If you are looking to give feedback on our new site, please send it along to feedback@globeandmail.com. If you want to write a letter to the editor, please forward to letters@globeandmail.com.
Comments