As first-nations protesters take to the streets to force the federal government pay more heed to native issues, leaders of the Assembly of First Nations say they are taking steps to ensure that the demonstrations and disruptions do not get out of hand.

A day of action to express dissatisfaction with a meeting last week between an AFN delegation and Prime Minister Stephen Harper will go ahead on Wednesday in Ontario and Manitoba and perhaps other parts of Canada, but first nations leaders are cautioning their members to keep the demonstrations peaceful.

Roger Augustine, the AFN regional chief of New Brunswick and Prince Edward Island who will chair meetings of the organization's executive while national chief Shawn Atleo recuperates from a severe bout of illness, said on Tuesday that he and the other regional chiefs have created a crisis response unit "to make sure that the safety and security of our folks out there is looked after."

Demonstrators plan to slow traffic coming across the Ambassador Bridge from the United States at Windsor, Ont., the biggest economic corridor in Canada. They plan to block Highway 55 near Cold Lake, Alta., near the southern edge of the oil sands.

"I think it's really important that there is some control," Mr. Augustine said. "You have to consider the health and safety access of the people in the communities."

Chiefs who are instigating the day of action have called upon supporters of Idle No More, a grassroots protest movement that began in December, to block transportation corridors. The group is independent – and occasionally critical – of the chiefs and has said it does not support blockades, but its followers could join protests on Wednesday.

Jody Wilson-Raybould, the AFN regional chief for British Columbia, will hold a conference call with other chiefs on Wednesday, and has said she will tell them actions that hurt the economy hurt everyone, including first-nations people.

But many chiefs disagree.

Mr. Atleo came out of last week's meeting saying he had a commitment that Mr. Harper would take a direct hand in first-nations issues – something that many chiefs greeted as a positive step toward dealing with problems that have left many native communities languishing in abject poverty.

Other first-nations leaders, however, are furious that the meeting went ahead after Mr. Harper rejected a demand by Attawapiskat Chief Theresa Spence, who is on a hunger strike, to have Governor-General David Johnston in the room. And they are angry that Mr. Atleo allowed Mr. Harper to limit the number of chiefs who attended.

Chief Perry Bellegarde of the Federation of Saskatchewan Indian Nations said he is unaware of any demonstrations planned in his province but would support them as long as they are respectful and non-violent.

"What you are seeing," he said, "is just the frustration level that's been built up over centuries of oppression and injustice, and economic marginalization – lands and resources being exploited without involvement or anything coming back to indigenous peoples."

Chief Isadore Day of the Serpent River First Nation in Ontario said many chiefs now realize demonstrations are the only logical course of action. "We want to make sure that there is a new dialogue and a much greater understanding that Canadians have around the issues that are facing first nations and ultimately all Canadians."

He is among those disappointed with Mr. Atleo for meeting with Mr. Harper despite the objections. Many don't agree that Ms. Spence should continue her hunger strike, Mr. Day said, but they do believe they had an obligation to back her in making her statement. 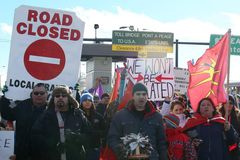 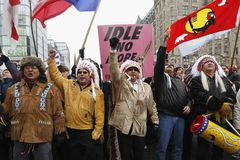 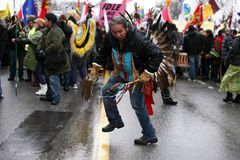