Finance Minister Jim Flaherty says after he's balanced the budget he wants to make Canada's income-tax system flatter by reducing the number of tax brackets - in order to give people more incentive to work.

This would allow people to earn more money in lower tax brackets and could effectively cut their marginal tax rate.

Tax reform is one of the ideas percolating at the governing Conservatives' policy convention in Ottawa right now where Tories are readying themselves for majority government and setting the tone and direction of their new administration.

Conservative Prime Minister Stephen Harper injected some swagger in a speech to party faithful Friday night, vowing his majority government would walk a ruggedly independent line in foreign policy while working at home to erase NDP electoral gains in Quebec.

"We also have a purpose, and that purpose is no longer just to go along and get along with everyone else's agenda," Mr. Harper said in a keynote address to more than 2,200 Conservatives.

"It is no longer to please every dictator with a vote at the United Nations."

He warned the NDP that its historic breakthrough, including the party's 59-seat win in Quebec, would quickly erode.

"Friends, the honeymoon with the NDP will pass. As many of us know well, no honeymoon passes as quickly and completely as one with the NDP."

It's brave talk for the Tories who lost ground in Quebec, seeing their seat count fall to five from 11 in the May 2 election.

Mr. Harper approaches his majority from a position of tremendous strength. He's won three consecutive victories for the Conservatives, and has achieved his long-sought goal of beggaring the Liberals, once considered the "natural governing party" of Canada.

With no threat of defeat, the Tories are free to consider longer-term reforms.

The tax reform Mr. Flaherty is championing could prompt people to earn more.

"I think we should be moving toward a flatter personal income tax system because it encourages economic activity ... it encourages entrepreneurial activity in Canada," Mr. Flaherty said.

"With multiple categories, what you do is you discourage some people from working harder and earning more money [which would end up]pushing themselves into a higher tax bracket," Mr. Flaherty said.

He said Canada should move "in the direction of a reduced number of personal income tax categories" for federal taxpayers. "Over time, that's a sensible thing to do." The Tories currently promise to balance the budget by 2015.

Speaking to assembled Tories Friday night, Mr. Harper made much of the Conservatives' commitment to stand alone if necessary on matters of foreign policy, as his government has done with strong and unwavering support for Israel.

"We take strong, principled positions in our dealings with other nations - whether popular or not."

Mr. Harper talked of a world where "power is shifting" and change is upsetting the old balance, saying in such an era, it's of "vital necessity" to be strong.

"Moral ambiguity, moral equivalence are not options; they are dangerous illusions."

Finance Minister Jim Flaherty wants to move to a flatter income-tax system with fewer categories after the budget is balanced. Here are the tax brackets and rates for 2011: 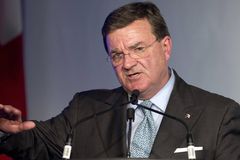 Though it will pass Commons, Tories must still sell budget to Canadians
June 7, 2011 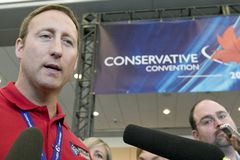 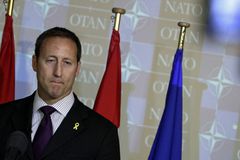 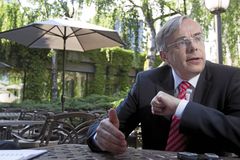