Finance Minister Jim Flaherty, who has spent the past six months thinking about whom to entrust with overseeing the country's financial system, finally found the answer staring back at him in the mirror.

As the United States and other countries debate giving more authority to central banks and other regulatory agencies, Mr. Flaherty Sunday said he is sticking with his current approach to systemic oversight, which brings together the heads of the Bank of Canada, the federal banking regulator and other key authorities on a regular basis to compare notes. The decision means a previously obscure grouping of senior officials - the Financial Institutions Supervisory Committee - will be thrust into the spotlight as Canada's answer to the pledge the federal government and its allies in the Group of 20 made to correct regulatory failings that contributed to the financial crisis.

Mr. Flaherty made clear that even though unelected public servants will play crucial roles, responsibility for ensuring that Canada stays out of financial trouble rests with him.

"The Minister of Finance, supported by the Department of Finance, has ultimate responsibility for the financial system and authority for all financial sector legislation."

"It is our job to ensure effective co-ordination of all pillars, and that a balance of non-overlapping responsibilities is maintained," he said in prepared remarks for a group of international fiscal policy experts last night in Vancouver.

Mr. Flaherty's emphasis on accountability is important because one of the major weaknesses of regulatory structures as they exist now is a lack of clarity over who's responsible for safeguarding the entire system, something officials call "macroprudential regulation."

The theory is that the credit crisis in the United States might have been avoided if a central authority had seen the systemic danger posed by Wall Street's aggressive selling of securities backed by subprime loans and other complex financial products.

Financial institutions were able to satisfy the various regulators that their books were sound. Better macroprudential oversight might have noticed how the sale of those assets was propping up the financial system on brittle pillars, and the selling of these products could have been curbed before disaster struck.

Mr. Flaherty reiterated that the eventual head of the national securities regulator he is seeking to create will join the FISC, completing a model that is being considered in the United States and the European Union.

"This committee allows us to collectively identify and correct weaknesses in a timely way," Mr. Flaherty told the International Fiscal Association, according to a copy of the speech given to reporters in Ottawa. "It helps to stop problems before they become crises in the financial system."

Mr. Flaherty's decision to stay with the status quo will disappoint those who argued for a stronger role for the Bank of Canada. Former Ontario Securities Commission chairman David Brown and others said this year that avoiding another financial crisis required a powerful entity that was accountable for the health of the entire financial system, not simply one aspect of it, such as lenders or bond and stock traders.

The Obama administration wants to give the U.S. Federal Reserve greater power to regulate large banks, although it remains unclear whether Congress will accept that proposal.

But even though Mr. Carney signalled his readiness to take on a greater role, there was never a consensus that Mr. Brown's suggestion was the right one.

Mr. Flaherty, whose approach to governing is to keep things simple, appears to have sided with the counterargument espoused by academics such as Paul Masson, an economics professor at the University of Toronto's Rotman School of Management and a former adviser at the central bank, that Mr. Carney is busy enough setting monetary policy, and taking on an official regulatory role would only serve as a distraction.

"The bank plays an important role in supporting financial stability within its existing scope of authority," Mr. Flaherty said. 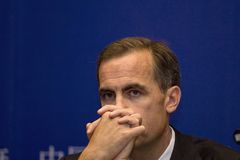 Follow Kevin Carmichael on Twitter @CarmichaelKevin
Report an error
Due to technical reasons, we have temporarily removed commenting from our articles. We hope to have this fixed soon. Thank you for your patience. If you are looking to give feedback on our new site, please send it along to feedback@globeandmail.com. If you want to write a letter to the editor, please forward to letters@globeandmail.com.
Comments