Canadians have donated more than $300-million to federal political parties over the past decade, including more than $40-million last year alone. The financing figures clearly show the flow of political and economic power to Western Canada; since 2004, Alberta has more than doubled its contributions, and gave $5.5-million last year. Yet federal parties still rely on Ontario for nearly half of all their campaign money.

The rise of the West 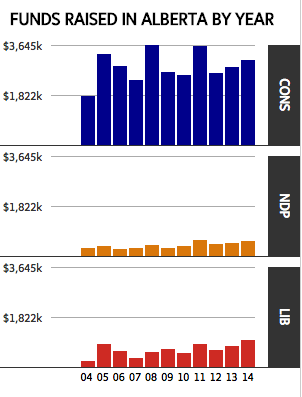 With its oil wealth and booming population growth, Alberta is playing a larger role than ever in federal politics. Donations to federal parties in the province have more than doubled in the past decade, from $2.3-million in 2004 to $5.5-million in 2014.

The NDP has been less successful in the province. Even as the provincial New Democrats managed to topple more than 40 years of provincial Progressive Conservative rule in Alberta this year, there is scant evidence that the federal NDP is seeing a surge of financial support in the province. Last year, Mr. Mulcair’s party raised just $582,000 in Alberta.

Donations have also soared in B.C., rising from $2.8-million in 2004, to nearly $7 million last year. The Tories still reap the largest number of donations in the province, raising more than $3-million last year. But opposition parties have similarly eaten into the Conservative Party’s dominance in B.C.

Where the Conservatives have firmed up their support is in the Prairie provinces outside of Alberta. Donations from Manitoba and Saskatchewan represented nearly 10 per cent of contributions to political parties last year, above their 7-per-cent share of the country’s population. Last year, the two provinces raised a combined total of $3.6-million, more than double the $1.5-million those provinces donated in 2004. Half of that went to the Conservatives, up from 37 per cent a decade ago. The Conservatives gains have come mainly at the expense of the NDP, whose share of donations in Manitoba and Saskatchewan dropped from 37 per cent in 2004, to 23 per cent last year. 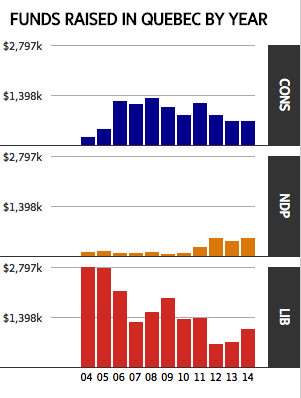 The most dramatic shift has been the collapse of federal political support in Quebec. In 2004, the province donated more than 20 per cent of contributions to federal parties. By last year, that had fallen to just 8 per cent.

Of the more than 40 ridings that have seen political donations steadily decline in the past decade, all are in Quebec. Collectively, federal donations in the province fell from more than $4.2-million in 2004 to $2.6-million last year.

The drop is mostly a reflection of the plunge in Liberal support in the province in the aftermath of the sponsorship scandal, when donations to the party from Quebec dropped from a high of $2.8-million in 2005, to just $650,000 by 2012.

The Bloc Québécois has also suffered a steep fall in its donations, although there is little evidence the separatist party’s former supporters have opted to open their wallets for the New Democrats instead.

Likewise, after seeing an early pick-up in donations after winning power in 2006, Mr. Harper’s Conservatives have whittled away their initial fundraising momentum in Quebec, raising just $840,000 last year.

While both Justin Trudeau’s Liberals and Tom Mulcair’s NDP have been able to make inroads into the province since the last election, neither of them has been able to fully reverse the province’s waning financial support for federal politics. 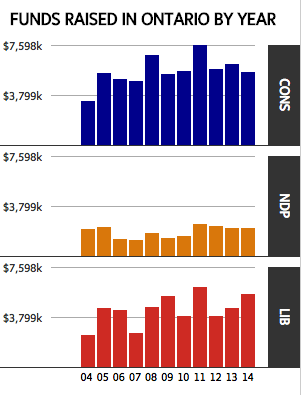 Political power may have shifted westward under the Conservatives, but Ontario remains the heartland of party finances. Federal parties have also been able to steadily grow their funding in the province since the last election. Last year, Ontario donors gave more than $18-million to federal parties, up from $12-million in 2012.

In 2014, the Conservatives and the Liberals each raised close to $8-million each from Ontario, more than three times what those parties raised in 2004. Only the NDP has seen very little change in Ontario over the past decade: In 2014 the party raised roughly $2.5-million in the province, just $400,000 more than it did in 2004.

Ontario’s dominance partly reflects the outsized role that both Toronto and Ottawa play in political donations. Toronto voters have donated more than $40-million to political parties over the past decade, while the suburbs around the city have donated another $36-million. 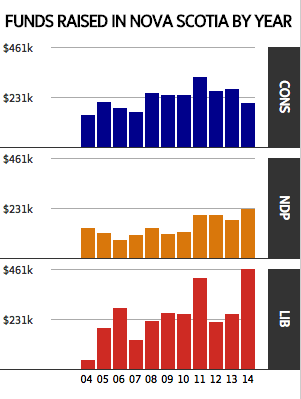 While it is still a tiny share of overall federal political financing, donations coming from the Atlantic provinces have more than tripled over past decade, from $650,000 in 2004 to more than $2.2-million last year. The largest share has gone to the Liberals, who raised $1.1-million in the region last year, compared with $700,000 for the Conservatives and $440,000 for the NDP.

Canada’s resource boom has fuelled more political donations in Newfoundland and Labrador. Ridings such as St. John’s East, St. John’s South Mount Pearl and Bonavista-Gander are all giving far more to federal parties than they did a decade ago. Last year, Newfoundlanders gave more than $1.5-million to the Liberals, compared with just $83,000 to the Conservatives.

Change the year or click on a riding to see how much all three parties raised per capita in that area. Riding names and boundaries reflect those that existed from 2004-2014, prior to Election Canada’s redistribution this year.

This project is based on a database compiled by Leon Lukashevsky, an independant developer who published all contribution records online. His post also covers some limitations and concerns with the data.