Conservative Leader Stephen Harper portrayed himself as a hard-headed realist, but his opponents painted him as the leader who turned Canada away from what the country believes.

The leaders of Canada's political parties turned a large chunk of Monday's Munk debate on foreign policy into a discourse on Canadian values.

Unlike previous debates, this was a case where the veteran incumbent, Mr. Harper, who has steered Canadian foreign policy for the past decade, was at the centre of the argument, beset by two opponents. But by staying cool and striving to sound moderate, he managed to use experience to counterattack.

Liberal Leader Justin Trudeau said Mr. Harper has moved Canada far from what it used to be, unwilling to bring in Syrian refugees and talking only about security, unwilling to send Canadian troops to peacekeeping missions, turning its back on multilateralism, and damaging Canada's reputation abroad.

New Democratic Party Leader Thomas Mulcair also accused Mr. Harper of hurting Canada's reputation and failing to deliver results: Canada, he noted, is the only country that withdrew from the Kyoto protocol, but it still did not get any oil pipelines built. And Mr. Harper, he said, has lost the respect of the White House. "Where Mr. Harper has failed, we'll get it done," he promised.

Still, Mr. Harper had the home-field advantage in this debate, and he often used it. When the subject was Canada-U.S. relations, he talked about his conversations with President Barack Obama; when it was Vladimir Putin, Mr. Harper said he had met the Russian President many times.

Foreign policy is an area where incumbents, especially veterans, can expect to have an edge – but voters may have different values. That is why, even before the debate, Mr. Trudeau issued an op-ed on returning Canada to a peacekeeping role.

But for Mr. Harper, it was in precisely those areas where he was accused of turning his back on Canadianism that he did best.

When Mr. Mulcair was asked to defend his pledge to withdraw Canadian troops from the military mission against Islamic State, the NDP leader argued Canada could do other things better, like aiding refugees. Mr. Trudeau split the issue, saying Canada could add more value by training local troops than by sending planes for air strikes.

Mr. Harper argued that he was the leader seeking balance, saying he agrees with the need for humanitarian assistance and training: "None of that explains why the other parties would not also take direct military action against the Islamic State."

It was not a debate where any opposition leader was likely to sway an undecided voter with the argument that Mr. Harper was incompetent. That is why they talked mostly of values. Mr. Harper stresses threats to Canada, and promises protection; Mr. Mulcair and Mr. Trudeau argued he had turned his back on the Canadian values of being a good global citizen.

Mr. Trudeau and Mr. Harper clashed repeatedly, for example, on accusations that Mr. Harper used fear-mongering to justify his foreign policies, including, in Mr. Trudeau's view, to shirk responsibility for bringing in Syrian refugees. Some of the most passionate exchanges came as Mr. Harper defended his government's bill to strip the citizenship of dual citizens convicted of terrorism – with Mr. Harper taking up the attack, but Mr. Trudeau accusing him of creating a two-tier citizenship.

In other stretches of the debate, foreign policy slipped away. In an exchange about the government's controversial security law, Bill C-51, Mr. Mulcair talked about Tommy Douglas standing up against the War Measures Act, Mr. Trudeau expressed teary pride in his father, and then the two lapsed into accusations. The only direct tie to foreign policy was later, when Mr. Mulcair used Mr. Trudeau's acquiescence on the bill to argue that if the Liberal Leader cannot stand up to Stephen Harper, he would not stand up to Mr. Putin.

Foreign policy has rarely been a big issue in Canadian election campaigns, but on Monday, the leaders showed how they do use it: as shorthand for attributes they want voters to see. Mr. Harper, who wants people to see a strong leader using experience to protect them on the world stage, did not see his attributes shaken. Neither of his opponents were defeated either: They were playing to voters who think Mr. Harper has his values wrong, and probably did not win many converts. 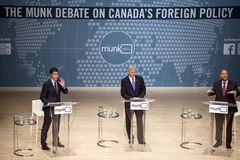 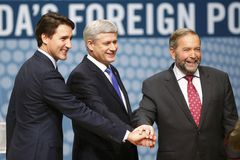 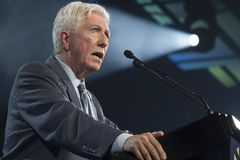