Prime Minister Justin Trudeau will appoint former astronaut Julie Payette as Canada's next governor-general, picking the prominent Quebecker for the high-profile position rather than a number of aboriginal leaders who were also seen to be in the running, sources say.

Senior federal officials pointed out that tradition calls on the Prime Minister to appoint a francophone to the post after the seven-year tenure of David Johnston and Liberals in Quebec are ecstatic with the selection, which will be announced in Ottawa on Thursday.

"She is perfectly aligned with the image that we want to project," a senior Liberal official said. "It's such a nice nomination."

From the archives: How Julie Payette's childhood dreams sent her into orbit

The Liberals hold 40 of 78 ridings in Quebec, but the province still offers them room for growth given the fragile support for the NDP and the Bloc Québécois. Appointing Ms. Payette as Canada's 29th governor-general will be a key selling point for Mr. Trudeau who will soon travel to the province as part of his summer tour later this month.

Reaction on social media was largely unanimous in support of Ms. Payette's appointment.

The pressure was high on the Prime Minister to find someone who would garner widespread support, after his failed attempt last month to name former Ontario Liberal minister Madeleine Meilleur as the Commissioner of Official Languages.

Mr. Trudeau is believed to have informed the Queen during a recent trip to Scotland about the identity of her next representative in Canada.

Ms. Payette did not respond to a request for comment on her personal e-mail.

Born in Montreal, the 53-year-old is best known for spending a total of 611 hours in space aboard space shuttle Discovery in 1999 and Endeavour in 2009. She operated the Canadarm during the missions and was the first Canadian astronaut to board the International Space Station.

Ever since her entry into the Canadian space program in 1992, Ms. Payette has built a large national profile as a public speaker and scientist, garnering 18 honorary doctorates in addition to her degrees from McGill University and the University of Toronto.

A mother of two, Ms. Payette is fluently bilingual in French and English, speaks four other languages (Spanish, Italian, Russian and German), is a licensed pilot and has sung in public with orchestras.

According to a Montreal newspaper, Ms. Payette's favourite coffee mug has the following inscription: "Failure is not an option."

Mr. Johnston, who has been in the position since 2010, is retiring in coming weeks after having agreed to prolong his tenure by two years in 2015. He is currently on an official visit to China.

Ms. Payette's nomination would uphold the tradition of alternating between anglophone and francophone governors-general. Before Mr. Johnston, the holder of the title was Michaëlle Jean, who was born in Haiti but had been working as a reporter in Montreal.

Appointing a governor-general is one of the most delicate decisions made by any prime minister, who must find an accomplished individual who can represent the federal government at home and abroad. While the role is largely ceremonial, the governor-general reads the government's Speech from the Throne in Parliament and can be called upon during a constitutional crisis. In 2008, Ms. Jean made the controversial decision to agree to a prorogation request by then-prime minister Stephen Harper, whose minority government was headed to defeat in the House of Commons.

Ms. Payette obtained her bachelor of engineering at McGill University in 1986 and her master of applied science at the University of Toronto in 1990. She was selected among 5,330 applicants in 1992 to become one of four astronauts by the Canadian Space Agency.

She then started to learn Russian and undertook military pilot training. She reported to the NASA Johnson Space Center in Houston in 1996 and completed her initial astronaut training two years later, according to her official biography.

She went off in space for the first time in 1999 as a mission specialist. Before her 2009 mission on Endeavour, she talked about her joy of going back, this time as a flight engineer.

"I'm really proud to be representing Canada in space. Canada is a world-renowned leader in space robotics and an important partner in the International Space Station project. As launch approaches, I look forward to the moment when I will see again our beautiful planet from the window of the space shuttle," she said.

Since her retirement from the Canadian Space Agency in 2013, she has sat on a number of boards, including the Canadian Olympic Committee and the National Bank of Canada. She was named chief executive officer of the Montreal Science Centre in 2013, leaving the position in 2016 with two days' notice through a terse news release. 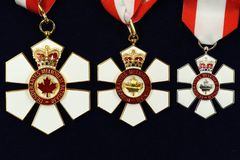 Canada is lucky to celebrate with such a friend as The Prince of Wales
June 27, 2017
Governor General David Johnston’s favourite room in Rideau Hall
June 26, 2017