Former environment minister Jim Prentice privately told U.S. Ambassador David Jacobson more than a year ago that he was prepared to impose new regulations on the oil sands if the industry and province did not improve their environmental performance, newly released Wikileaks documents reveal.

In a cable to Washington, Mr. Jacobson described an introductory meeting - held a month after he assumed his post in October, 2009 - in which Mr. Prentice eagerly sought to establish a personal relationship with the new face of the Obama administration in Ottawa.

The ambassador said Mr. Prentice expressed his frustration with the growing international "dirty oil campaign" against Alberta's oil sands, but suggested the industry and provincial government needed to improve their environmental standards.

"He noted that if industry did not take voluntary measures and if the provincial government did not set more stringent regulations, he would step in and press federal environmental legislation," says the cable, which was obtained by Wikileaks and posted Wednesday by the Norwegian newspaper, Stavanger Aftenblad.

Still, when Mr. Jacobson asked whether Ottawa would consider imposing a moratorium on further expansion in the oil sands, Mr. Prentice said such a move was unnecessary, and that he felt growth to four million barrels a day - more than double the current production - would be "sustainable."

At the lunch, held on Nov. 5, 2009, Mr. Prentice sought to charm the new envoy by declaring his respect for President Barack Obama, including his interest in the President's "back story, persona and goals," the cable says. And he recounted personal stories of his own, including anecdotes about his daughter.

"Prentice appeared keen to forge a personal relationship with the Ambassador, to the mutual benefit of both countries," the cable says.

It describes the former environment minister as the "most respected" member of the Prime Minister Stephen Harper's inner circle, and as someone who "enjoys Harper's complete trust."

In the course of the conversation, Mr. Prentice recounted how he had been shocked during a visit to Norway to find heated opposition to the oil sands during a public debate over state-owned Statoil ASA's investment in the controversial oil fields.

Mr. Prentice resigned from cabinet last month without introducing new federal environmental regulations for the oil sands. Instead, Ottawa has said it will regulate the industry's greenhouse-gas emissions only after the U.S. government imposes similar rules south of the border.

Despite his threat of new regulations, Mr. Prentice was in the process of backpedalling on an earlier promise to release draft regulations for the oil sands and other major greenhouse-gas emitters that fall, in the lead-up to the Copenhagen climate summit.

At the time, however, Mr. Prentice was clearly feeling political heat from a global campaign by environmental organizations to focus on Canada's oil sands. The cable quotes him as complaining that Canada had been "too slow" in responding to the environmentalists' efforts and failed to grasp the magnitude of the impact on the country's reputation.

New Democratic Party environment critic Linda Duncan said the leaked document confirms her sense that Mr. Prentice was becoming frustrated with the industry for its failure to clean up its image.

"At one meeting, he just totally lashed out at the industry," Ms. Duncan recalled. "And at the time, I just laughed and I thought they're waiting for you - that's your job, to regulate." 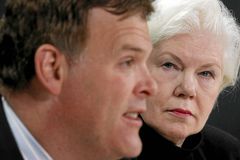