The Conservative Party wanted them in, but they wanted out.

Two former Tory MPs say they refused to join the party's "in-and-out" election financing scheme, adding to the number of Conservatives who say they had misgivings about the system.

Inky Mark, who resigned his Manitoba seat last year, said his staff was contacted by party officials during the 2006 election campaign. He said the officials asked if they could deposit several thousand dollars in his campaign account and withdraw it later to buy advertising.

Independent conservative MP Helena Guergis - who was turfed from Tory caucus last year over rumours of wrongdoing that were never substantiated - also says her campaign was approached and rejected the plan.

"I was asked but I said no. Something in my gut told me no," Christine Brayford, Ms. Guergis's sister and campaign manager, said in an email.

Elections Canada alleges the scheme allowed the party to exceed its 2006 campaign spending limit by $1.3-million. That included letting 67 candidates claim about $800,000 in public rebates to which they were not entitled - riding cash that went toward radio and TV ads that had little regional or local component to them.

The commissioner of elections laid charges against four party officials last week after consulting the federal director of public prosecutions.

The party maintains the matter is an administrative dispute and vows to vigorously fight the charges.

This week, the Federal Court of Appeal backed Elections Canada in a civil suit brought against the agency by two former candidates. The party says it intends on seeking leave to appeal with the Supreme Court of Canada.

"That's what we did in the 2006 election: we used practices that had been widely used by all parties at the time."

Mr. Mark and Ms. Guergis join former Quebec Conservative candidate David Marler, who also rebuffed Conservative officials when they approached him during the 2006 campaign. Court documents also show that Conservative MP Dave Mackenzie turned down the offer of a deposit and withdrawal of funds, but Mr. MacKenzie has not spoken publicly about the issue.

The rejections suggest the amount of alleged overspending could have exceeded the $1.3-million Elections Canada is pursuing party officials over.

A Conservative source who spoke on condition of anonymity questioned Mr. Mark's version of events. But Mr. Mark's former campaign manager, Debby Sorochynski, said she recalls being asked to receive money and then have the funds withdrawn quickly afterward.

Ms. Sorochynski said she remembers the issue because it sounded similar to a case involving Conservative cabinet minister Vic Toews, who pleaded guilty and was convicted of electoral overspending in a Manitoba provincial election.

Three other candidates in that election were also convicted of the breach of electoral laws.

The provincial Progressive Conservative party had asked candidates shortly before the 1999 election to sign an authorization to absorb $7,500 each in central campaign expenses, according to the Winnipeg Free Press account of court testimony. Mr. Toews's lawyer said at the time that Mr. Toews initially did not want to participate in the plan.

"That was a well-known, documented story in Manitoba, so when the national office offered an opportunity to get involved in something that sounded similar to that, we just said No," Ms. Sorochynski said.

When asked Thursday about the conviction and whether he saw a similarity with the current case, Mr. Toews just said "No."

Is in-and-out case trouble for Tories or 'speeding ticket' of scandals?
March 3, 2011 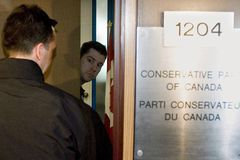 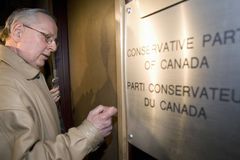