Ms. Freeland issued a statement Thursday on the third anniversary of Russian forces annexing Crimea, saying Canada unreservedly denounces what she called "this violation of Ukraine's sovereignty and territorial integrity" and urged Western countries to keep economic sanctions in place.

The Russian embassy accused Ms. Freeland – a Toronto MP of Ukrainian descent who has been banned from entering Russia – of making "politicized statements with unfounded claims" and insisted that the people of Crimea welcomed the Russians with open arms.

"The people of Crimea expressed their will clearly and legitimately at the referendum after the West-backed coup d'état in Kiev that triggered the civil war in Ukraine. Crimeans exercised their inalienable right to self-determination in full accordance with the UN Charter and international law," Russian embassy spokesman Kirill Kalinin said in an e-mail to The Globe and Mail.

In fact, the international community condemned the Russian takeover in early 2014 and passed a United Nations resolution underscoring the illegitimacy of the referendum that led to the formal Russian annexation of the territory.

The war of words between Ms. Freeland and Russia is turning more rancorous as Canada's top diplomat is speaking up more forcefully against Russian aggression. Her predecessor, Stéphane Dion, often talked about seeking areas of co-operation with the Putin-run Kremlin.

After she became foreign affairs minister, pro-Russian websites reported that Ms. Freeland's maternal grandfather had worked as the chief editor of a Ukrainian-language pro-Nazi newspaper in Poland that often published anti-Jewish diatribes. Ms. Freeland, who has known since 1996 about her grandfather's activities during the Second World War, dismissed the reports as an attempt by Russia to discredit her.

Moscow has also refused to lift a travel ban against Ms. Freeland unless Canada lifted economic sanctions – a demand rejected by the Trudeau government.

In her statement, Ms. Freeland was particularly critical of the Kremlin's crackdown on Crimea's Muslim Tatars, who have never accepted the occupation. Russian authorities have raided homes and mosques, exiled community leaders, banned rallies, and closed down Tatar media outlets as well as the informal Tatar legislature.

At least 15 Tatars and pro-Ukraine activists have been kidnapped or gone missing. One of them was found dead from possible torture and another allegedly hanged himself in a desolate barn.

"Canada is deeply troubled by the politically motivated application of 'anti-terrorist' and 'anti-extremist' legislation; ongoing harassment of human rights activists, journalists and lawyers; arbitrary detentions; disappearances; and the persecution of Crimean Tatars and other minorities," Ms. Freeland said. "We denounce the banning of the Mejlis, the self-governing body of the Crimean Tatars, and have called on Russia to reverse this illegal and immoral decision."

Since the occupation of Crimea, Ms. Freeland said Moscow has also denied access to international human-rights groups, including the Human Rights Monitoring Mission in Ukraine, even though the "importance of this access was endorsed on Dec. 19, 2016, in a UN General Assembly resolution co-sponsored by Canada."

An estimated 20,000 Tatars have left Crimea since Russia annexed the Black Sea peninsula.

Russia maintains the measures are aimed at preventing terrorist activities by Islamic jihadis, but human-rights groups disagree, saying the crackdown is because the Tatars have never accepted the Kremlin's claim over their ancestral homeland.

Amnesty International has described Russia's crackdown of ethnic Tatars as "brutal," saying the "Crimean Tatar people have been deliberately targeted by the de facto local and Russian authorities in a wave of repression aimed at silencing their dissent and ensuring the submission of every person in Crimea to the annexation."

Ms. Freeland, whose mother helped write Ukraine's constitution when the Soviet Union broke apart, has been a long-time critic of the Putin regime. She was banned from Russia in 2014, along with 13 other Canadians, as part of President Putin's retaliatory measures to Western sanctions.

The day she was banned from Russia, Ms. Freeland responded on Twitter, saying she considered the sanction an honour.

Prior to entering federal politics, Ms. Freeland was a financial journalist who had worked and lived in Moscow for several years, and sharply criticized Mr. Putin as a dangerous autocrat.

Freeland knew her grandfather was editor of Nazi newspaper
March 7, 2017 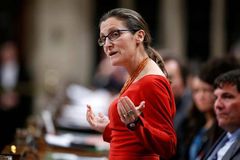 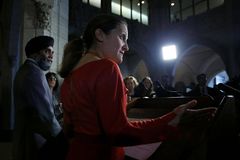 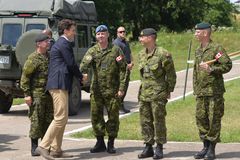