Stephen Harper bid a final goodbye to a central player in his eight-year-old government, delivering a tearful and highly personal eulogy to Jim Flaherty that shed new light on the partnership that steered Canada through tough economic times.

He revealed that Mr. Flaherty, who suffered health problems in recent years, had wanted to quit in 2010 but stuck to the finance minister's job because he wanted to balance the books before leaving – a stubbornness the Prime Minister suggested had cost him physically.

"He believed he had taken on a responsibility for all of our families, not just his own and he was prepared to make sacrifices – ultimately, although he did not know it, to sacrifice himself," Mr. Harper told a crowd of more than 1,800 at St. James Cathedral in Toronto.

Mr. Flaherty died April 10 of an apparent heart attack only weeks after announcing he was leaving the Finance portfolio and politics for private life. He was given a state funeral Wednesday that attracted former prime ministers and dignitaries.

Mr. Flaherty's wife, Christine Elliott, and two of their three sons – Quinn and Galen – paid tribute to their father's hard-driving personality, which saw him work as hard in public life as he did raising a family.

"Dad, I love you. We love you," said Quinn Flaherty, who was flanked by his mother and brothers. "Put your feet up, lay your head back, close your eyes and relax. We will take it from here."

Ms. Elliott recalled first meeting her husband when they worked at the same law firm. That first day they spoke, she said, he barely looked up from his work.

"That was Jim: driven, intense, a perfectionist," she said. "He was the most intelligent man I ever met and his clarity of thought was unparalleled."

Partly inspired by his son John, who has a developmental disability, Mr. Flaherty cared about helping people of differing abilities. Even as he was working to balance the books in Ottawa, he and Ms. Elliott helped set up the Abilities Centre in Whitby.

He was close with his sons, she said, recalling the many times he would bond with John at live sporting events.

"Jim wanted to make a difference in people's lives – that's why he entered public life," Ms. Elliott said. "He wanted to make sure that everyone, regardless of their varying abilities, have the chance to live happy lives of purpose and dignity."

Mr. Harper, for his part, used an 18-minute address that was by turns poignant, funny and sad to offer Canadians a glimpse into his relationship with Mr. Flaherty.

The Prime Minister said that his finance minister hung in the job despite informing him four years ago that he would prefer to quit were it not for the fact Ottawa's finances were in deep deficit.

"He deliberately set his own plans aside and put off his goals for his family," Mr. Harper recalled.

"And every year after that, without any prompting from me, the call would come and Jim would say, 'Prime Minister, I'm still worried about the global economy and we're not yet in balance. I want to do one more budget.'"

Mr. Flaherty resigned in March, shortly after tabling a budget that forecast balanced books by 2015, if not earlier.

In recent years, however, he suffered a serious physical toll. Mr. Flaherty was afflicted by a rare skin disorder, one that required strong steroid treatment with side effects that included facial swelling, bloating, puffiness, difficulty sleeping and significant weight gain.

Mr. Harper said Mr. Flaherty insisted on remaining as finance minister throughout. "And so he did year after year, work away on the next phase of the Economic Action Plan, even as, in the past couple of years, it became more and more difficult for him, and sometimes hard to watch, as every one of you could plainly see."

Mr. Harper also revealed he and Mr. Flaherty regularly locked horns about policies in private, even though they shared the same underlying conservative philosophy.

"On the specifics of the many and complex priorities before us, we often had, at least initially, different views."

He said their differences normally disappeared during budget-planning negotiating sessions. "When they didn't, occasionally, I imposed a final decision," Mr. Harper said.

Mr. Flaherty was known for self-deprecating jokes about his height and Mr. Harper took a page from his former finance minister, offering an observation about the Whitby politician at his own expense.

Calling Mr. Flaherty a principled, yet "ruthlessly pragmatic" man, the Prime Minister noted he was combative and had a "quick and biting temper but also a "deep and gentle sense of humour."

At the same time, Mr. Harper said, even Mr. Flaherty's enemies admired and respected him.

The Prime Minister joked that he was jealous of his finance minister in this respect.

"That's something in this business, something I envy – I can't even get my friends to like me," Mr. Harper said to laughter from the crowd.

He also revealed a more personal side of himself as he addressed Mr. Flaherty's triplet sons and shared the pain of losing his father in an effort to console them.

"I lost my own father almost exactly to the day, 11 years ago," Mr. Harper said. "From that period, I remember almost nothing of what I said or what was said to me, so powerful were the waves of emotion."

But, he assured them, it gets better. "Once that passed, and perspective took hold, I came to appreciate my father's place in my life, probably even more fully and deeply than if he were still here.

Galen Flaherty said that of Mr. Flaherty's many titles over the years – from Ontario attorney-general and deputy premier to federal finance minister – his most important was father.

"My father was a politician because he loved his country. He was my dad because he somehow won my mom," he said. "But at the end of the day, he was my father because he showed me what it takes to be a man. He gave me an example that I will aspire to for the rest of my life." 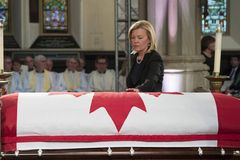 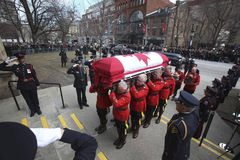 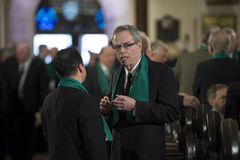 Read Stephen Harper's eulogy for former finance minister Jim Flaherty
April 16, 2014
Follow Steven Chase and Adrian Morrow on Twitter @stevenchase @adrianmorrow
Report an error Editorial code of conduct
Due to technical reasons, we have temporarily removed commenting from our articles. We hope to have this fixed soon. Thank you for your patience. If you are looking to give feedback on our new site, please send it along to feedback@globeandmail.com. If you want to write a letter to the editor, please forward to letters@globeandmail.com.
Comments