Gilles Duceppe is upbeat for a man whose polling numbers show he could face electoral annihilation.

Mr. Duceppe is upstairs from his campaign offices in Montreal, where a handful of workers mill around in a low-key atmosphere veering on morose. A day earlier, Mr. Duceppe gave a Montreal press conference on infrastructure spending in which Bloc candidates and supporters outnumbered journalists about six to one.

Once the head of a commanding delegation of separatist MPs in Ottawa, Mr. Duceppe is now the invisible man on the federal election trail. He's pulling in no more than 14 per cent of the leaders' media coverage in Quebec, according to tracking firm Influence Communication, and polls show his party stuck in third place behind the NDP and Liberals.

His best hope to be relevant again comes Thursday, when he takes to the stage for the race's first French-language leaders' debate. It will be a make-or-break chance to try to stop what appears to be a seismic shift in public opinion in Quebec.

A new Léger poll provided to The Globe and Mail shows the NDP losing steam in Quebec but remaining in first place in voter choice. All three other parties are edging upward but the Bloc remains third with 20-per-cent support.

It suggests that for now, Quebeckers are still turning to the NDP as their primary voice in Ottawa, a change in allegiances that could boost Leader Thomas Mulcair's hopes nationally and bury the Bloc for good.

Thursday's faceoff could also help Mr. Duceppe justify one of the strangest comebacks in politics, which saw him abandon political retirement to take the helm of a party widely viewed as moribund. Now 68, he says he returned to lead the Bloc for a seventh campaign out of duty. "If you don't lead the fight, you're sure to lose it."

Yet a transformation in voter sentiment in Quebec – "Orange is the new Bloc," as a Maclean's headline put it – is evident in the fact that even Quebeckers who would otherwise call themselves sovereigntists are ready to back the NDP. Pauline Duquette, a retired health-care worker, fought on the separatist Yes side in two referendums. Now, she supports the New Democrats.

"I'm not a federalist, but I'd like to get along with the other provinces," she said Tuesday as she shopped for orchids at a market in Mr. Duceppe's former riding. "Mr. Duceppe did his time. The Bloc shouldn't be there any more. With them it's always about recriminations, about complaining."

University student Julien Lévesque said he felt the Bloc had nothing new to propose. The 22-year-old said he has considered himself a sovereigntist in the past but a recent bike trip through Turkey, which gave him a closeup look into the troubled region, had him reconsidering splitting up Canada.

"I've thought about it," Mr. Lévesque said, "and think that maybe we should just try to get along."

For all his challenges, Mr. Duceppe enters Thursday's debate with some undeniable advantages. He is the most seasoned debater of the bunch, remains a respected figure in Quebec, and tends to be likeable on stage.

As the federal campaign enters its final month, he's scrambling to shore up the Bloc's vanishing base by zeroing in on wedge issues like the Muslim face veil. He supports invoking the Constitution's rarely used notwithstanding clause to ban the veils at citizenship ceremonies, and wants to forbid them when Muslim women vote and obtain public services, too.

It's a gambit to try to tap into a hot-button issue in Quebec and portray the NDP as out of step with public opinion in the province.

"They're asking women to erase themselves from public space," Mr. Duceppe said. "This doesn't correspond to Quebec."

Aware of his principle rival, Mr. Duceppe is directing his attacks at Mr. Mulcair, whom he tries to cast as one person ("Thomas") with a separate message to Quebec and another person ("Tom") in English Canada.

However, polls show Quebeckers are favouring the NDP as their vehicle to oust the Conservatives, suggesting the 2011 rout that saw the Bloc reduced to four seats may not have been a fluke. Christian Bourque of Léger says the Bloc's current polling numbers could translate into zero seats on Oct. 19.

"A lot of Quebeckers are saying [that this election] is a referendum on Stephen Harper, and like 2011, they want to vote for a party that can beat him," said Mr. Bourque. "That has left no place for the Bloc Québécois on the political landscape."

Mr. Duceppe's decision to return to take over the Bloc from the unpopular Mario Beaulieu in June might partly be explained by internal polls reportedly showing that under his leadership, the Bloc could pick up as many 40 of Quebec's 78 seats. He spoke to PQ Leader Pierre Karl Péladeau, who supported the move, Mr. Duceppe says.

This summer, the pair campaigned on bicycles to promote the sovereigntist cause on two wheels. But the bounce that Mr. Duceppe's arrival gave the Bloc was shortlived. This month, one editorial cartoonist showed the two sovereigntist leaders on a tandem. The wheels had come off.

French-language debates could be turning point for Liberals in Quebec
September 23, 2015 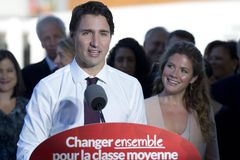 Trudeau boxes with former coach in Montreal on eve of French-language debate
September 23, 2015 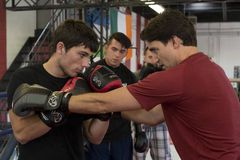