This wasn't your father's first ministers' meeting, or Justin Trudeau's father's either. It wasn't a haggle over money or constitutional powers. The premiers, all but one, came singing a similar chorus about climate change.

It was not like the typical federal-provincial meetings of old. It wasn't the jurisdictional wrangling over which Pierre Trudeau and Brian Mulroney presided. Premiers used to come asking for cash. Paul Martin's health summit went smoothly because he poured $41-billion into health care.

Here, premiers praised Mr. Trudeau, who promises to build a national climate deal on provinces' existing plans, for co-operation. Part of it is relief because it's been six years since predecessor Stephen Harper held a first ministers' meeting. And this group of provincial leaders, including six Liberals of varying shades and two New Democrats, is more politically in sync with Mr. Trudeau. But it's also because most premiers have a stake in selling the climate mission, too.

There was no negotiation on emissions targets, or burden-sharing, or sticky questions about how the green infrastructure funds that Mr. Trudeau has promised will be divvied up. The premiers were hitting the same notes.

Now, Canada can get past the "black eye" on its reputation, B.C. Premier Christy Clark said. A national effort to reduce emissions, said New Brunswick Premier Brian Gallant, is not only the right thing to do, it will allow Canada to market its resources to the world. Quebec's Philippe Couillard said it's time for a "rebranding" so the world knows Canada is a major producer of renewable energy, too.

The official meeting opened with a a public briefing from scientists delivering dire warning. Premiers chimed in on the economic consequences of inaction. They confidently declared the national plan can be mix and match, with each province offering its own approach, and Mr. Trudeau's federal government helping them reach goals with things such as infrastructure funding.

It wasn't all harmony. Saskatchewan Premier Brad Wall said "whoa" – he warned that climate plans must not hurt the ailing energy industry, and kill jobs in Saskatchewan, Alberta, or elsewhere. But he was the outlier.

Most premiers have their own climate promises to meet. They will court controversy over carbon taxes and other measures. Premier Rachel Notley's plan would have been unthinkable in Alberta not long ago. Ontario's Kathleen Wynne, who promised her province will join a cap-and-trade system in 2017, will outline more actions Tuesday. And some measures won't just touch big industrial emitters like oil sands producers, but ordinary residents and consumers. They were trying to get the public to buy in.

Alberta's new climate strategy, released Sunday, was an essential piece of the campaign. A new carbon tax, and a cap on oil sands emissions, addressed questions about Canada's poster-child emitter, helping other provinces: without it, one provincial official said, residents in other provinces would ask why they're bearing the burden if Alberta isn't acting. The other premiers were out touting their own plans. They are anxious to tell the world Canada is no climate laggard.

But it's not that simple. The provincial plans, from B.C's $30-a-tonne carbon tax to Quebec's cap and trade to Alberta's oil sands cap, still don't add up to enough emissions reductions to meet even the existing targets submitted by Mr. Harper's former government. Environment Minister Catherine McKenna has said those existing targets are a floor, not a ceiling, for cuts – and next week, at global climate talks in Paris, Canada will tell the world it will be more ambitious.

Down the road, future first ministers' meetings on climate will have to broach the subject of further efforts, and that's when it gets tougher. Mr. Trudeau could well be forced to be the arbiter if provinces disagree over the burden; he will certainly face competing demands for climate cash. But for now, Mr. Trudeau and most of the premiers have a reason to speak in unison: They have the same mission to sell. 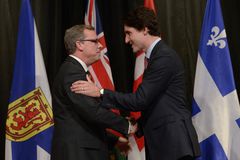 Ontario climate change ‘master plan’ to be released this week
May 15, 2018 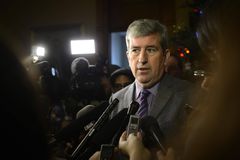 Premiers wary of being pushed aside by PM on climate policy
May 15, 2018