More. Increased. Tripled. These are the key words the Liberal government wants you to remember about its revamped military mission against the Islamic State. Not that CF-18 fighter jets are coming out, but that more forces are going in.

That's the political bargain Prime Minister Justin Trudeau had to make to finally get himself past the reflexive opposition he expressed, long before he became Prime Minister, to Canada's part in the bombing mission. To stop the complaints about doing less, you have to do more.

There will be more. There will be triple the contingent of trainers in northern Iraq with Kurdish peshmerga fighters, to more than 200. Canada will now give the Kurds rifles, machine guns and mortars. Canadian Forces will go to coalition targeting operations in Kuwait and headquarters in Iraq. And there will be a lot more aid, hundreds of millions of dollars, for neighbouring countries.

This package will meet the political tests Mr. Trudeau faces, both with foreign allies and with public opinion at home. But it falls short of the test Mr. Trudeau himself set back in 2014, when he voted against Stephen Harper's Iraq mission.

The results aren't bad. None of the new initiatives will solve the world's Islamic State problem, but then, six CF-18s were never going to do that, either. Canada was doing some good with training; now it will do a little more. There will be increased efforts to help the region through aid. But there's no grand new rationale for Canada's military engagement.

In the 493 days since Mr. Trudeau first declared Canada should not just "whip out our CF-18s," he struggled to explain it. He argued Canada could do more valuable things, but waffled when asked why Canada can't bomb, and do training, too. "In any mission, you have to make choices," he said Monday. And that was that.

But back in October, 2014, he expressed other reasons for opposing the mission against the Islamic State. Mr. Harper was sending Canada into combat, without a clear role, in a mission that was unclear. "It is always easier to get into a war than get out of one," he told the House of Commons then. He argued Canadian Forces troops would be put in harm's way without an endgame. He's shed that reasoning now.

The new mission includes some reasonable choices. Canada's six CF-18s were replaceable, because many other countries offered bombers. Air strikes are important in hemming in the Islamic State, but it takes ground forces to dislodge them, so sending more trainers to aid those fighters is a reasonable plan. There's merit, depending on the details, in trying to stabilize the region through expanded aid and diplomacy.

It's enough to solve Mr. Trudeau's political problem. The Conservatives will still complain he's taken Canada out of the fight, but the Liberals will argue they are doing more. Allies didn't like the optics of anyone withdrawing, but now Canada is re-upping. U.S. Ambassador Bruce Heyman offered an endorsement.

It clearly has limitations. Tripling the trainers working with Kurdish fighters may help, but it's shoring up Iraq's strong point. Kurds fight in their own region, and elsewhere there are Shia militias and a weak Iraqi army – but the real challenge in Iraq remains recruiting and training Sunni fighters to take on the Islamic State in Sunni-dominated regions. There was a promise to increase diplomatic presence, but at the moment, Canada is a diplomatic non-player in this intractable crisis.

It's certainly not a mission that meets the tests Mr. Trudeau raised in 2014. It's not a combat mission, but it's deeply involved in supporting combat. The trainers aren't deployed to fight the Islamic State, but accompany the Kurds who do, painting targets for air strikes while they're at it. Now there will be three times as many in harm's way. And they'll be delivering machine guns and mortars, too. No logic distances Canada from combat. And the coalition mission's endgame is no clearer.

But it does get past that promise to withdraw from bombing that he made in 2014, back when he was warning about getting drawn too far into war. That promise chafed with allies and at home. Moving past it meant committing to do more. 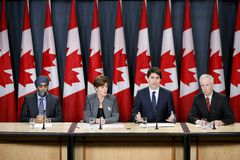 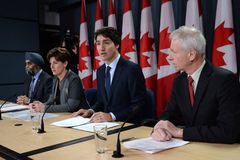 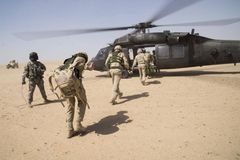