Canadian officials are returning from their latest battle with the European Union over a ban on this country's seal products and federal politicians are again fighting to prove that their party is the most unflinching supporter of the hunt.

A statement released this week by Health Minister Leona Aglukkaq and Fisheries Minister Keith Ashfield boasts that the Conservative government "will not shy away from, nor apologize for, defending a lawful Canadian industry and the economies of coastal and northern communities."

The government, says the statement, will always put the livelihoods of Canadian families first, "unlike members of the Liberal party."

In fact, animal welfare groups say, there is only one Liberal Member of Parliament who is known to have lodged concerns about the seals. Hedy Fry, the MP for Vancouver Centre, wrote a letter two ago saying she would like to end the commercial hunt – a letter that the Conservatives distributed as proof that the Liberals were playing into the hands of the "extreme animal rights groups."

Ms. Fry has not said much about seals since that kerfuffle. She did not return calls to The Globe and Mail to clarify her position this week.

But, if she still believes the commercial hunt should end, she would be one of just two sitting MPs of any stripe to have voiced that position in more than a whisper to a trusted friend. The other is Green Party Leader Elizabeth May whose party has been saying for several years that the hunt no longer justifiable.

If the remaining 306 MPs who have said nothing all support the hunt, that would mean the views federal politicians are not representative of the Canadian population.

Polls say different things depending upon who commissioned them. One that was done in 2010 by the International Fund for Animal Welfare suggested that 77 per cent of Canadians believe that pups under a year old – which comprise the entire hunt – should be protected. But even a poll commissioned by the Fur Institute of Canada suggested that 16 per cent of us oppose the seal hunt for any reason and an additional 20 per cent said it should be restricted to aboriginal hunters.

In other words, it is fair to say that Canadians are divided on the issue. So why aren't MPs? Surely there must be some seal-hunt opponents among the members of the NDP caucus who have, over the years, introduced one animal-rights bill after another.

Dan Mathews, the senior vice president of the animal activist group PETA, said he has met with many Canadian politicians and it comes down to this: Seven swing seats in Newfoundland and Labrador. And voicing objections to the seal hunt is political suicide in any one of them.

Just look at what happened last year when Ryan Cleary, an NDP MP from Newfoundland mused publicly about whether the hunt was still worthwhile. Mr. Cleary had to quickly pump out a statement saying "the party and I are in full support of the commercial seal hunt – period."

Michelle Cliffe, a spokeswoman for the International Fund for Animal Welfare, said her organization has had discussions with federal politicians and there are at least 18 who admit that they oppose the hunt – all of them Liberals and New Democrats.

It's surprising that so many politicians would prefer to remain in the closet on this issue, especially because the commercial seal hunt isn't economically viable, said Ms. Cliffe. And it certainly isn't a vote getter outside of Newfoundland, she said.

Rebecca Aldworth, the executive director of Humane Society International/Canada, said the parties know that opposition to the seal hunt kills electoral chances in the Newfoundland and, even though large numbers of people in the rest of Canada oppose it, it is not an issue that drives votes outside of that province.

So the parties must all be seen to be supporting the seal trade even as worldwide markets dry up and the industry's viability has become a question mark. Observers who attended the World Trade Organization hearings of the European Union ban this week in Geneva say the Canadian contingent was one of the largest they have seen.

The decision in that case is not expected until the fall.

Ms. Aldworth was at the hearing. Polls show Canadians support the right to ban seal products, she said, "and yet there are multiple legal challenges ongoing that are being covered at Canadian taxpayers' expense."

Gloria Galloway is a parliamentary reporter in the Ottawa bureau. 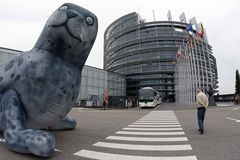 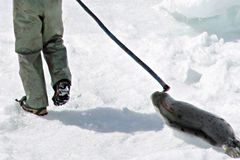 Canada's tough love to Europe: Don't look to us for a bailout
November 7, 2011 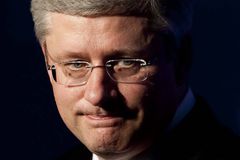