At 6:30 on Monday evening, Treasury Board President Tony Clement is scheduled to open a debate in the Commons, where he will defend $57-million in government spending on the Senate. Good luck with that, Mr. Clement.

The next day, Auditor-General Michael Ferguson's report on the expense claims of Senators is due to be made public. Whatever we learn from some still-unleaked details, we can expect to hear that 30 senators will be found to have spent money in inappropriate ways that, at least in most cases, Canadians won't like.

It's obvious to most people that these two things go together, but Prime Minister Stephen Harper, while visiting Ukraine on Saturday, suggested they don't. The Senate, he told reporters, is an independent body, and is "responsible for its own expenses."

The bad news is that it's a half-truth, at best. The Senate has so much money to spend because the sums are recommended by the cabinet and approved by the Commons. The good news is the government has some budgetary control to provide a path to quick, interim reforms – the kind that don't rely on Constitutional amendments required for making the upper house elected, or abolishing it.

A serious plan to cut the money, and its mix with partisanship, will help. The NDP's proposal to bar senators from campaign or fundraising work makes sense. The Senate's ethics code should state that such work is a conflict with their sober-second-thought duty.

Second, cut off discretionary funds. Senators don't represent anyone, so $15,000 is enough for travel, if they really live outside Ottawa. They can run their offices for $50,000 a year. That would cut the $40-million spent on senators and their offices by about half.

The rest of the Senate budget can be slashed, too, starting with cutting all funding for parliamentary associations and overseas travel.

Then Mr. Clement might have a Senate appropriation he can defend.

Mr. Harper has proposed major reforms such as electing senators or abolishing the Senate, but the Supreme Court, as most experts expected, found consent from the provinces was needed, so he appears to have given up.

That $57-million to be debated Monday night isn't the whole Senate budget, since another chunk of money is authorized by statutes, making this year's appropriation $89-million. The $57-million is a sum that has to be voted by the Commons.

It is MP for Winnipeg Centre, the NDP's Pat Martin, who is forcing a separate debate and vote on that money. That's a tradition for MPs from his party and his riding, from Stanley Knowles and J.S. Woodsworth. Mr. Martin does it because he is, as he says, in favour of a triple-A Senate. "Abolish, abolish, abolish," he said.

NDP Leader Thomas Mulcair may be willing to ask the provinces to agree to abolish the Senate, but it won't happen soon.

His party has also proposed cutting payments – but it has gone too far, calling for stopping all funding of the Senate.

Perhaps the NDP deserved more credit in a previous column for addressing the notion, but cutting off all the money isn't practical: The Senate is a constitutionally mandated institution, so it has to get some money. It just doesn't have to get that much, to be used as senators see fit.

The trial of suspended Senator Mike Duffy has shown us how money and partisanship are Senate problems that go together. Here's a senator who was filling his schedule with junkets, partisan events and fundraising. Think, for example, of his all-expense-paid, week-long trip to Britain in March, 2009, where he got off the plane to rush to a fundraising dinner for Ontario MP Gary Goodyear.

It's useful for prime ministers to have rich Senate sinecures to reward political allies, and as a payroll. Mr. Harper appointed his campaign manager, chief fundraiser, former party president, and former press secretary.

There have been proposals to cut down partisan appointments by making them more arms-length from the PM. Liberal Leader Justin Trudeau suggested committees such as those used for nominating Order of Canada recipients. But the Supreme Court made it fairly clear that can't be a formal, legislated process, so prime ministers can't be held to it.

Reforms, for now, have to start with practical ways to cut the money.

As Senate expense scandal grows, why hasn’t Ottawa cut off the money?
May 15, 2018 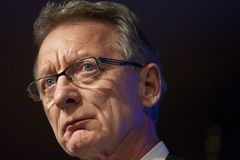 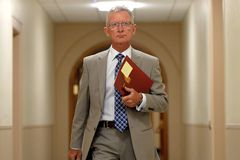 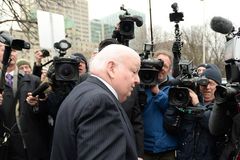