Scores of police move down a main thoroughfare on bicycles. Three trucks with horses transported from the Fort Worth Police Department stop traffic as they turn into a side street. And yet not for a half-century has an American political party gathered with so much insecurity.

That insecurity, unmistakable in a heavily guarded city in a vital Midwestern political state, grows out of concern about the Republican Party's nominee, its image in a country with a rapidly changing demographic profile – and its future.

For the ironies in this convention city are inescapable. Major Republican figures, including the two top Republican officials in Ohio, won't venture inside the hall where Donald Trump will be nominated Thursday night. The business leaders who for a century have been the mainstays of the party are staying away from a convention that is to select a businessman for the White House. The establishment figures in a party that since the Eisenhower years has been the very repository of the establishment outlook are themselves on the outs.

And a party that is presenting its most cherished crown to an outsider is flirting with alienating the ethnic outsiders who are a decade, or maybe less, from reshaping if not controlling the future of American politics.

The Trump surge this year brought new voters into the 160-year-old party, readjusted the Republicans' profile from Main Street and Wall Street to the mean streets of cities wrecked by the collapse of the manufacturing economy, and transformed a party that defeated populist insurgents in the 1890s into a party that – though reluctantly and only partially – is trying on a new populist tint this very week.

At the same time, a party that had a larger, younger and stronger bench than its Democratic rival – at one time the GOP presidential field had 17 contenders, as opposed to fewer than a half-dozen Democrats – is abandoning its image as the well-bred, well-mannered, well-behaved and well-intentioned interloper in the messy world of politics. Its free-trade tradition is in tatters. Its presidential and vice-presidential nominees disagree on immigration.

A member of the Bush family, which accounts for four years in the House of Representatives, eight years in the vice-presidency, 12 years in the White House, 16 years in governors' mansions and 20 difficult months as chairman of the GOP during the Watergate period, was reduced to writing this about his party's nominee:

"While he has no doubt tapped into the anxiety so prevalent in the United States today, I do not believe Donald Trump reflects the principles or inclusive legacy of the Republican Party," former governor Jeb Bush of Florida, who was belittled by Mr. Trump during an unsuccessful primary campaign, wrote in The Washington Post. "And I sincerely hope he doesn't represent its future." The result is deep unease and uncertainty in a party that once stood for social ease and political certainty.

"The Republican Party is bound for a crack-up," said James Guth, a political scientist at Furman University in Greenville, S.C. ''We're not there yet, but we are close. One or two more outrageous statements from Trump may just push a lot of Republicans over the edge."

American political parties rarely crack up, however. The Republicans survived the Barry Goldwater debacle in 1964, when the Arizona senator lost 44 states, and within four years had the White House again, and within 16 years many of the Goldwater ideas were redeemed by Ronald Reagan, who spoke on behalf of Mr. Goldwater on the eve of his doomed election day.

The Democrats lost 49 states under former vice-president Walter F. Mondale in 1984 and within eight years Arkansas governor Bill Clinton would be elected to the White House and the Democrats would have a new outlook, less antagonistic to business and less eager to please minorities.

In their classic 1975 study, " Transformations of the American Party System," the University of Connecticut political scientists Everett Carll Ladd, Jr. and Charles Hadley noted that American politics has been continually shaped and then reshaped by "new collections of political interests; new packages of concerns and of demands among groups; [and] a basic redrawing of the political agenda."

The Democrats, once identified with European immigrants and Southern segregationists, and the Republicans, once identified with Midwestern non-interventionism and New England austerity, have changed dramatically in recent decades. Indeed, the Republicans, now with a Solid South of their own, have been completely transformed over this tumultuous half-century – and are still evolving.

The political scientists Mark D. Brewer of the University of Maine and L. Sandy Maisel of Colby College argue in the 2015 edition of their Parties and Elections in America: The Electoral Process that transformations of political parties occur when new national issues emerge or a crisis arises that "polarizes the party elite, divides the electorate, increases turnout at the polls, and, in some cases, fuels the rise of third parties."

But the future the Republicans dread is that of the Whigs, a long-forgotten party that included such leading 19th-century figures as Daniel Webster, Henry Clay and General Winfield Scott and that provided four presidents, the last being Millard Fillmore, who left the White House in 1853.

The Whigs were a victim of the fevered American debate over slavery. "The party disintegrated," said Eric Foner, the Columbia University historian regarded as one of the leading experts on 19th-century American history, "and by 1856 it was gone."

At the heart of the current Republican rebellion – and, also, at the heart of the Bernie Sanders challenge to the nomination of Hillary Rodham Clinton that ended only this month – is impatience with the political class.

On the Republican side, that impatience grows from frustration over the GOP's inability to deliver on its promises, especially on economic issues. And while Mr. Trump does not offer policy viewpoints that directly address these frustrations – his support of entitlement programs, for example, actually flies in the face of GOP orthodoxy to bring these elements under control – he still has managed to harness those frustrations into a powerful new political force.

"Trump is the result of a Republican Party that didn't anticipate change but merely responded to it," said former senator Gary Hart of Colorado, twice a Democratic presidential candidate himself. "It's not in their nature to push for change but to resist it." But that new force, and the party's new emphases, trouble many Republicans, particularly those who themselves had been working for decades to reposition the GOP away from its elitist profile.

"The personality of Donald Trump, as huge as it looms over everything right now, is not the whole picture," said former Representative Vin Weber, whose family – his grandfather was a Republican president of the Minnesota State Senate – has been otherwise open to Republican outsiders, including Wendell Willkie in 1940 and Representative Jack Kemp in the 1980s. "If you look at the Republicans today on immigration, trade, and race and gender issues, you've got to wonder if this party can compete in the 21st century."

But of all those, the greatest challenge is demographic. For all the talk about outsiders in the convention hall here in Cleveland, many outsiders remain beyond the security gate.

"The definition of outsider clearly means something different in Trump's view," said Jessica Lavariega-Monforti, who heads the political science department at Pace University in New York.

"It's clear that women and minorities are not supporting Trump, and his alienation of them has actually mobilized them. There are loads of them registering to vote, so the question is whether they will vote. And if they do it can mean a lot – not only for this election but also for the future. We're could see the formation of a group of politically active voters for the long term."

When it comes to political conventions, history shows a divided party rarely wins in November
July 18, 2016 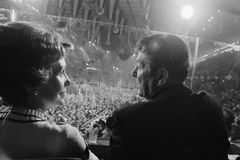