There was a pause. U.S. assistant Secretary of State Roberta Jacobson was asked, in a conference call for reporters on Wednesday, if the Obama administration is celebrating Justin Trudeau at a state dinner because he is a big change from Stephen Harper and the long, bitter dispute over the Keystone XL pipeline. Ms. Jacobson, it seemed, was working out a diplomat's response.

Er. Um. "I think what I would say is this," Ms. Jacobson said, taking a breath. "There obviously has been a transition from one government to another." Keystone was important to the former government, she said, but the Canada-United States relationship survives any one issue. "I don't know that I would overplay, sort of, the distinction between governments." Phew. Safe.

But there is little doubt the Obama administration is happy to see the back of Mr. Harper and glad to see Prime Minister Trudeau. That is a big reason the new PM is the first in 19 years to be invited to a state dinner. For the White House, the old Canadian had become irritating; the new one is a lot more like Barack Obama's political progeny.

Mr. Harper's spat with Mr. Obama over the oil pipeline bubbled into public view. Mr. Obama's perception of Mr. Harper is said to have started to sour at the 2011 summit of the G8 in France, when the Canadian PM opposed other leaders' desire for a statement putting pressure on Israel for peace talks, said former diplomat Colin Robertson, vice-president of the Canadian Global Affairs Institute. Mr. Harper's Keystone frustrations combined with a feeling that Mr. Obama disregarded Canadian concerns. He gave the President's second ambassador, Bruce Heyman, the cold shoulder – Mr. Heyman could not get meetings with ministers for months. Diplomatic co-operation slowed, apart from military and security issues.

The U.S. side has embraced Canada's change in government. The Liberals have made a high-profile priority of resetting relations. Mr. Heyman was among those who advocated for the President to hold a state dinner with Mr. Trudeau as a symbol the relationship was being refreshed.

The idea is not entirely new. Ronald Reagan went to Quebec City in 1985 and sang about his smiling Irish eyes with Brian Mulroney partly because of connection and partly because the new PM was more to his liking than Pierre Trudeau (leaving aside the brief tenure of John Turner), whose peace missions and flirtation with Cuba annoyed.

But U.S. presidents do not obsess about former Canadian prime ministers. Mr. Trudeau symbolizes something, too: A North American leader in the same vein, a kind of inheritor of Mr. Obama's brand of politics.

Climate change is an issue that animates both, despite tricky domestic politics. "Clearly, it's a place where the two met and see the world through the lens in the same way," Mr. Heyman said in an interview with The Globe and Mail. "But I think there was a general way in which the two guys just seemed to connect with each other."

It should not surprise. Mr. Trudeau borrowed from Mr. Obama: the appeal for inclusiveness combined with economic growth and hopeful campaigning. Mr. Trudeau's advisers borrowed techniques from the Obama camp. In many ways, they followed the Obama model. The President can see Mr. Trudeau as something of a foreign heir.

That is part of the invitation. The state dinner, Mr. Heyman said, is Americans celebrating Canada. But state dinners are also big Washington events, and Mr. Obama, in the last year of his presidency, is also throwing a party that celebrates his own legacy. It fits to have Mr. Trudeau, who is garnering attention in the United States as a young glamorous leader, but also as an optimistic, left-leaning politician, who welcomes Syrian refugees while Republican presidential contender Donald Trump pledges to send them all back, and bar all Muslims, too. In celebrating Mr. Trudeau, Mr. Obama can also celebrate his own school of politics.

So now Mr. Trudeau will be feted by the White House as the Canadian future. The Chinese President was given a state dinner to acknowledge national weight; others are often honoured as allies. After 19 years, Mr. Trudeau's invitation was extended because a neighbour that turned distant to the Obama administration is close again. 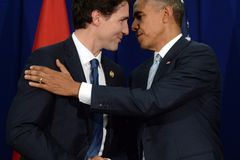 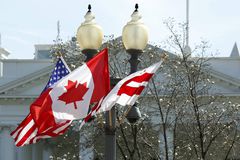 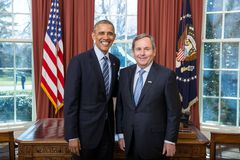