Canadian cities are testing a new statistics-based risk modelling tool that will help them identify weaknesses in their water infrastructure as flood risks increase.

Call it a clever lobbying strategy or call it necessity, but the group behind the new software is none other than the Insurance Bureau of Canada, an industry association whose members are trying to mitigate their insurance payouts amid more extreme weather events and skyrocketing insurance claims.

Lapo Calamai, director of catastrophe risk and economic analysis for IBC, whose members have 90 per cent of the property and casualty insurance market, said by e-mail that the group already expects its insured losses for 2016, pushed up by the Fort McMurray wildfires, to surpass the 2013 record of $3.4-billion nationally.

By the end of the year, the group hopes municipalities around the country will be using the new machine-learning, statistics-based software. Cities upload reams of data, ranging from the diameter of pipes to land physiography, and the program spits out a risk map, identifying trouble spots where upgrades can reduce or even prevent municipal flooding.

The group's idea for the infrastructure risk mapping tool came six years ago, after its researchers noticed rising costs due to floods and other weather-related events.

"After high water disasters in Calgary, ice storms in the east, floods in Toronto and fires in Alberta, we now feel the real pain and people are connecting the dots," said Geoff Cape, head of green-cities environmental group Evergreen, who has been following the development of the software program.

Mr. Cape said it was a well-timed strategy: "Canada is waking up to the challenge of climate change – we are beginning to understand that severe weather is the new normal."

Right now, the cities of Coquitlam, B.C., Fredericton, N.B., and Hamilton, Ont. are piloting the software, and IBC has transferred the program rights to Tesera Systems Inc., the Alberta-based firm that developed the tool.

Tesera and IBC are now demonstrating the software to councillors, mayors and city managers at the Federation of Canadian Municipalities' annual conference June 2-5 in Winnipeg. Tesera hopes to get cities across Canada licensing it by the end of the year, partly because as more municipalities use it, the program learns from more data and makes better predictions.

The software tool will initially focus on improving sewer and stormwater infrastructure to avoid the highest-cost damage, namely sewer system backup and home flooding. The IBC says 19 per cent of households are at risk of flooding.

"It allows them to look into the future with their infrastructure and see what the potential risks might be," said Bruce MacArthur, chief executive of Tesera Systems Inc., the Alberta-based firm that developed the risk-mapping tool for IBC. "Basement flooding is a big deal because a lot of people have improved the value of their homes. Basements now have a lot of value of them. In the past, in the '50s and '60s, probably less so, but [it's] more so now than ever before."

Environment Commissioner Julie Gelfand, in a report on May 31, urged the Liberal government to put more emphasis on mitigating the effects of climate change through its infrastructure spending. The report also recommended better tools to plan more resilient infrastructure, noting: "We found that some data was incomplete, and some tools were obsolete."

The Liberal government, which has committed to doubling infrastructure spending to $120-billion over the next 10 years, has provided $75-million for the Federation of Canadian Municipalities' climate change resilience program and $50-million for other climate resilience projects. The government also has a national disaster mitigation program for building more flood-resilient communities.

A disaster financial assistance fund is also available for responding to large-scale natural disasters. The IBC estimates assistance from the fund has climbed from an average of $36-million a year in the 1970s to $166-million in the 2000s and to more than $1-billion a year at the start of the current decade.

The IBC has also been lobbying the federal government for a national flood program, and met with Environment Minister Catherine McKenna and her chief of staff, Marlo Raynolds, in March, according to the federal lobbyist registry.

Mr. Calamai of the IBC said increased funding for the disaster mitigation program and similar government initiatives has not been enough. "Municipalities are struggling to fund critical resilient infrastructure projects and new, additional sources of funding need to be put forward," he said.

The group is also talking to the government about other potential catastrophes, such as earthquakes, after it conducted studies showing potentially tens of billions of dollars in economic costs and insured losses if an earthquake was to strike near Vancouver Island or Quebec City.

Opinion
In Fort McMurray, let’s build resilience, rather than a repeat disaster
June 8, 2016 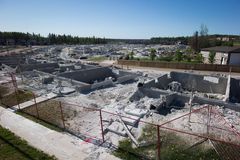