The inquiry into missing and murdered aboriginal women, promised by the Liberal government, is getting wider and wilder.

Its scope, length, cost and focus keep growing with every new pronouncement by Indigenous Affairs Minister Carolyn Bennett, who has become an echo chamber for the Native Women's Association of Canada, whose every claim the minister seems to endorse.

This week, Dr. Bennett insisted that the number of women murdered or missing is "way bigger" than the nearly 1,200 cases the RCMP have investigated and reported on in considerable detail. How does she know this? By talking to aboriginal women's groups and individuals who have been making this claim all along.

The cases that the RCMP have investigated occurred from 1980 to 2012 – more than three decades. In addition, the RCMP provided an update for cases in 2013 and 2014. How many did the RCMP miss or were not reported? Who knows? It is impossible to know, especially from 1980 to 2014. But Dr. Bennett is sure it is "way bigger," in which case this inquiry will be engaging in a massive fishing expedition.

If the government chooses the vehicle of a public inquiry, then it will stretch on for many years and cost huge amounts of money – to produce outcomes that mostly can be predicted today, including that of the first-year criminology student's understanding that the majority of assaults were committed by men who had intimate or close relations with the victims (that is, aboriginal men); that sociological problems contributed to violent behaviour; that racism infected certain cases; that, in some instances, the police might have been late to the file; and that, of course, non-aboriginal people are largely, if not wholly, responsible for the entire tragedy.

Do we need an inquiry to tell us more than these likely, if not obvious, conclusions? The straightforward answer is no, but you have to hand it to the Native Women's Association because it has been persistent and exceptionally media-savvy and has the minister entirely under its spell.

Even the Conservative Party, which while in office rejected the idea of an inquiry, has swung around to favour one, such being the carefree ability of opposition parties to take positions devoid of responsibility.

Public inquiries – if this is the tool the government prefers to use – are feasts for lawyers. Every group whose activities are under investigation will need a lawyer. Individual RCMP officers whose work will be reviewed will have to be represented (except, of course, for those who have died). RCMP detachments in particular regions will have a lawyer. So will other police forces in regions where the RCMP are not the local police. The inquiry itself will have lawyers, investigators and researchers.

If you think this is an exaggeration, think back to the inquiry into the activities of certain members of the Canadian military in Somalia. Rows of lawyers filled the room every day. The inquiry dragged on as reputations had to be defended, allegations tested and factual evidence probed.

That inquiry was mostly about the activities of certain individuals within a short period of time – not the activities of many people spread across Canada in a period stretching more than 30 years. And that inquiry was not investigating allegations of things unknown and unknowable, such as the tally of aboriginal women who went missing or were murdered being "way bigger" than 1,200.

If not a public inquiry under the Inquiries Act, then what? A kind of reprise of the Truth and Reconciliation Commission, with its large research staff and testimony from hundreds of witnesses, resulting in a prodigious multivolume report replete with 94 recommendations – some serious and practical; others silly and impossible – ranging over a multitude of aspects of Canadian life?

If a T&R No. 2 is what the government is after, then it will not be a public inquiry but rather a loose, sprawling investigation into sociology, history, economics and anthropology, which in turn would be incapable of actually reinvestigating criminal cases, reviewing police work, discovering what happened or did not happen in particular cases – let alone trying to get a handle on the assertion that the number of missing and murdered aboriginal women is "way bigger" than had been previously identified.

It is no wonder that despite Dr. Bennett's travels around Canada, many months lie ahead of trying to define what this inquiry or investigation or commission, or whatever, is supposed to do, how it is supposed to do it, and why. 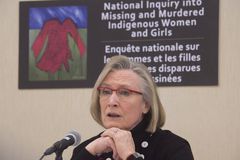