Barack Obama is leaving the U.S. presidency on a high, and it wasn't difficult to understand why, listening to him Wednesday when he spoke before Parliament.

Mr. Obama has been vilified by his Republican opponents, excoriated by his country's right-wing media, accused because of his race of all sorts of malign things, while also being criticized by liberal Democrats and intellectuals for not having pushed harder for progressive causes.

And yet, slightly more than four months from the election of a successor, his approval ratings are high and rising. Eleven of the last 12 national polls show him with positive margins of approval versus disapproval; even Fox News, an Obama-baiter, found a plus-five for the President.

His popularity contrasts with polls showing that three-quarters (or more) of Americans disapprove of the performance of Congress. Also, by a wide margin, Americans believe their country is headed in the "wrong direction," to quote the pollsters' favourite phrase.

Reading into these results is a tricky business, but it could be that a majority of Americans do not blame Mr. Obama for the paralysis and dysfunction of the U.S. government on so many issues, or for the sense that the country is not headed in the right direction.

Maybe the majority of Americans understand that whatever Mr. Obama's failures, they pale in comparison to those of his critics, especially the Republican congressional leaders who – on Day 1 of his first term – decided to oppose, by any and every means, all of his initiatives.

The U.S. political system is premised on divided government and among different branches of government, which means, by definition, that it must be transactional. It needs constant deal-making and brokering and arm-twisting.

Mr. Obama stands accused, probably fairly, of not spending enough time soaping Congress, but then how does any president engage in transactions when the other side's only objective is to oppose everything he wants? And then there is the U.S. Supreme Court, with its highly politicized majority – the one that handed the presidency to George W. Bush – that frustrated many of Mr. Obama's wishes, although not his health-care reforms.

Maybe, too, as Mr. Obama's time in office wanes, the majority has come to appreciate that while the presidential race has descended to the depths of name calling and unprecedented lying by one candidate (obviously, Donald Trump), and while the entire U.S. political debate is toxic and polarized, Mr. Obama has kept his cool, acted with dignity at home and abroad, kept the tone of his remarks elevated; in short, he has acted presidential.

He had the gift of oratory, especially at times of national tragedy, as in the funereal moments following mass shootings, or on great national occasions. When he answered questions or gave extended interviews, his nuanced and thoughtful answers struck some as too cerebral, but given the alternatives on offer today, what was there not to like?

Mr. Obama's critics portrayed him as too cautious with enemies abroad, forgetting that his predecessor in the White House had plunged the country into Iraq, thereby precipitating, or at least abetting, the descent into quasi-anarchy that prevails in that corner of the world today. Americans were not ready, and rightly so, for more adventures when those who urged more military muscle had no end game other than more of the same.

Mr. Obama, like all U.S. presidents, had many more important international questions on his mind than relations within North America. He slapped Canada by rejecting the Keystone XL pipeline that would ship Alberta crude south when his country was pumping oil at a record pace and approving pipeline construction within the United States. Obviously, his relations with former prime minister Stephen Harper were cool, in contrast to the love fest with Justin Trudeau, on whom he bestowed the gift of a state dinner in Washington. It is a pity for bilateral relations that Mr. Obama is departing, given that the two leaders get along so well.

No one, given the nature of U.S. politics and society today, could be a transformational president. The obstacles to progress are too great, the divisions too evident, the hatred of him from certain quarters too implacable.

Mr. Obama tried to summon, however, what Abraham Lincoln called the "better angels" of his country's nature. For that, an increasing number of his fellow citizens, and friends of the U.S. abroad, are grateful.

Highlights from Obama’s speech in the House of Commons
June 29, 2016 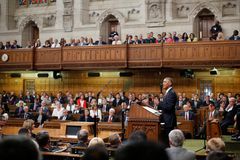 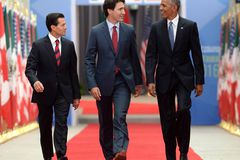