This being a litigious society, some groups are already preparing to run to the courts and all the way to the Supreme Court of Canada, because they did not like what Parliament decided in the matter of physician-assisted death.

It is asserted by those who sought another outcome that the Supreme Court will strike down Parliament's work. They possess the certainty of the unknown given to all advocates.

Perhaps the unhappy advocates of another outcome will eventually be proven correct that, because the government, and through it Parliament, did not accept key elements of the court's first ruling, the judges will tell elected officials that they, and not them, actually decide such things.

Such an attitude would be consistent with a court whose tolerance for political discretion is often limited. But perhaps not, since this matter of assisted death is new and might need some experience in practice to see how the law will work.

Handed this issue by the court, the Liberal government tried, as any government would, to steer to a conclusion, understanding that opinions were varied and passionately held – for what could be more emotional than matters of life and death? The government, and the court for that matter, was moving into uncharted waters that would inevitably cause people to read into the future rather than rely upon the past.

Under these difficult circumstances, the two ministers charged with charting a course did well: Justice Minister Jody Wilson-Raybould and Health Minister Jane Philpott. They offered plausible arguments about why their legislation did not follow the text of the Supreme Court ruling, and deviated perhaps from its intent.

They paid the Senate the respect of providing a written reply to concerns expressed in a chamber that, for a change, did provide "sober second thought." The ministers listened, but they did not necessarily agree with critics, an attitude that earned the critics' scorn, since they seemed to think that listening should be synonymous with agreeing.

They were always going to be somewhat on the defensive in public because the debate, predictably, was dominated by lawyers and law professors who feel most comfortable pushing the untidiness of life (and death) into legal definitions.

Unfortunately for the ministers, the support the bill received from the Canadian Medical Association and other caring professions received only a fraction of the attention paid to the dissenting constitutional lawyers, who are trained to talk more often in public than doctors. Of course, it will be the doctors (and nurses) who will be on the front line of this law, unlike the lawyers and judges who will be somewhere else.

The Senate, that butt of national scorn, seems in these early days to be evolving into an institution worth listening to. With a bunch of "independent senators," and more to come, the hacks and has-beens are being replaced by people not formed by partisanship.

Wisely, the Senate did not exaggerate its role in the assisted-death debate. Members there offered advice and criticism. They sent legislation back to the Commons with suggestions for change, but when these were not accepted, the majority of senators did not overplay their hand. Having said their piece, they let the legislation pass, for to have done otherwise would have been to arrogate power unto themselves that only the elected MPs should possess.

So now the country has a degree of certainty with a new piece of legislation in an entirely new field into which only a handful of countries have ventured. The certainty will last, of course, only until the first interest group or clutch of law professors launch a legal challenge, inviting the courts to overturn this new legislation for failing to give effect to the Supreme Court ruling based on the Charter that says nothing, of course, about assisted death.

The Court read assisted death into broad provisions in the Charter, provisions that reasonable people could have interpreted differently. Instructed to do its job – legislate – parliamentarians did just that in a prolonged debate in which many voices were heard, the two legislative houses listened to each other, and the government whom we elected ultimately decided. 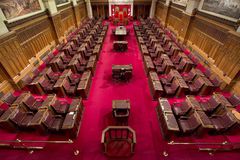