The NDP had been unhappy with the composition of the parliamentary committee designed to study changes. It objected to the Liberals having a majority on the committee, arguing that the party had won only 40 per cent of the votes in the past election; committee membership should reflect votes cast, not seats in the House.

The Liberals yielded to NDP criticism a bit on Thursday, giving the combined opposition parties a majority of the seats on the committee and relegating themselves to a minority. Now, the committee will have five Liberals, three Conservatives, two New Democrats and one each from the Green Party and Bloc Québécois. Such selflessness, however, does not hide that when or if any legislation comes to the whole House of Commons, the Liberals can do what they like courtesy of their majority.

The NDP, of course, wants proportional representation (PR), the system whereby Commons seats more or less reflect the parties' share of the popular vote. Whatever the philosophical or theoretical merits of PR, it's the only system for the foreseeable future whereby the New Democrats could get a share of power in the kind of coalition government PR systems usually produce. Theory aside, self-interest points the NDP toward PR.

The fervour of the NDP for PR stands in inverse relationship to the party's confidence that the people want that system. Listening to New Democrats, the gullible might believe Canadians are demanding PR from Tofino to Trinity Bay. And not just demanding, but clamouring for PR, so unjust is the existing system of first-past-the-post, whose weaknesses are apparently so evident and injurious.

Were this assertion even remotely correct, the New Democrats would be insisting on a national referendum. After all, if Canadians were to endorse in a popular vote a PR system, the new system would have the legitimacy and popular support that no other method of approval could provide.

It would appear, however, that the NDP is deeply nervous of democracy. It doesn't favour the people voting on this, quite likely because the party actually doesn't believe that the people are gung-ho for proportional representation. Otherwise, the New Democrats would be demanding a referendum.

So the NDP, like the Liberals, offer false arithmetic to back their public claims. Liberals, New Democrats and Green all got elected pledging to end first-past-the-post, without agreeing on a replacement method of voting. Therefore, critics of the status quo claim a "mandate" for change, as if electors had system change foremost in their minds, when in fact few of them gave the matter even a passing thought.

You doubt it? Try this test. Around the barbecue or pool or anywhere where friends gather this summer, pop this question: What do you think of proportional representation? If one in 10 knows what PR is, let alone how they feel about it, you will have hit a group far more informed than Canadians as a whole.

There is every chance, quite ironically, that the NDP will eventually have to demand a referendum. That moment will come when the Liberals, with their parliamentary majority, lay their cards on the table, that is, making public the party's private desire to have a system of preferential voting.

That system would likely favour the Liberals and hurt the other two parties, the Liberals being a popular second-choice option for both Conservatives and New Democrats. Being self-interested, but wishing to seem "inclusive," "consultative," "transparent," and "democratic," the Liberals will eventually try to manoeuvre this process to preferential voting.

At which point, the New Democrats, out-gunned in the House, will figure out that the only way to stop preferential voting would be a national referendum. Because if only the House votes, then the Liberals can and will get their way.

A referendum would allow all parties to advance their respective cases to the electorate. If the NDP and other PR supporters are convinced that the people want PR, then that system will win more than half the votes and become Canada's electoral law.

This whole electoral-reform game, stripped to its essence, is an elaborate but thus far not very coherent exercise by the Liberal Party in the pursuit of its own long-term self-interest. Only the people in a referendum might choose to stop them. By not aligning themselves with a referendum, New Democrats on Thursday won a small victory in what for them looks to be a losing game.

Canadians must get a vote on changing the vote
June 2, 2016 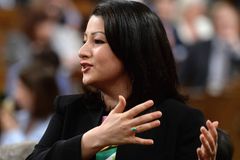 Election reform: A look at some available options for choosing a government
June 2, 2016
Jeffrey Simpson: Who owns the vote: the parties or the people?
Subscriber content
May 13, 2016