Liberal Leader Justin Trudeau reached for one of the most beautiful and powerful phrases in the Western democratic canon Monday night. Would that Mr. Trudeau remembers the phrase every day he is prime minister.

Culling from U.S. President Abraham Lincoln's first inaugural address, delivered on the eve of the Civil War, Mr. Trudeau said leaders need to appeal to the "better angels of our nature."

How easy it is, in the fray of political debate and the onrush of events and decisions, and in the face of the constant criticism that attends democracy, to forget the better angels. Certainly, the better angels have been scarce for almost a decade in Canadian politics. We need them back, to help restore some confidence in our institutions, in our democracy and in ourselves as mirrored in the country's political life.

Politics will and must always feature robust, vigorous debate. Politics is how we sort out choices and priorities in a democratic society. And since we do not all agree on these matters, we debate them endlessly and make a rough choice every four years or fewer, among ideas and leaders. But it helps protect or restore our faith in the way we make these choices if the debates are attended by some measure of restraint and dignity.

We can do debates better if the one at the top of our political institutions, the prime minister, leads with a tone of civility and respect; if he indeed calls upon the "better angels" of the country's "nature."

Such calls have been in short supply. Those with the fortitude for sour memories will remember the shrieking, ceaseless partisanship of the Harper government, epitomized by such ministers as John Baird and Pierre Poilievre; the bulldozing of parliamentary scrutiny with omnibus bills; the negative advertising campaigns seeking to denigrate the persona of opposition party leaders; the disdain for the media; the instructions from the Prime Minister's Office to Conservative MPs of how to manipulate and control parliamentary committees; the flagrant and persistent misuse of taxpayer funds to support pro-government advertising; the targeting of non-governmental groups critical of those in power; the deliberate attempt to drive wedges among groups using trivial but emotional issues; the disregard for objective facts provided by scientists or civil servants; the pervasive, sickening spin surrounding every government deed; the sense of being enveloped by "enemies" largely harboured among "elite" groups; the bunker mentality; and the daily operational axiom that every action had to be part of the "permanent election campaign," so that even the most mundane of announcements and decisions had to deliver some sort of partisan political punch.

Over time, these attitudes undermined support for the Harper government beyond its core group of backers who shared at least some of their party's take on how to conduct itself in power. But of greater concern is the corrosive effect these attitudes might have had on citizens' confidence in their governmental institutions.

Mr. Trudeau intuitively sensed – since he seems to be more intuitive than cerebral – that Canadians were recoiling from the way the Harper government did politics, which in turn reflected its sense of the electorate, subdivided into targeted voting blocks and best capable of being motivated by appeals to self-interest.

Without forgetting that the Liberals, too, crafted a platform with targeted groups in mind, especially the amorphous "middle class," Mr. Trudeau also tried to create the sense that he would try to govern for a wider base of people than just the minimum needed to squeeze out victory. There was no doubt whatsoever that he attracted a list of new candidates with impressive credentials who in turn conveyed the sense of change and purpose the country wanted.

What will happen when he and they arrive in power? Will they find that the hurly-burly of political life, and the combat in the Commons, dilutes and then dashes their promise to listen, occasionally compromise and think about the whole rather than bits of the whole?

Will he and they be able – amid the turbulence of events and the whirlpool of 24-hour media reporting and instant analysis – to keep their heads cool and their partisan instincts sometimes in check, and to remember that they were given this responsibility by a country that wanted a different tone for debates, a greater respect for institutions and, most of all, an appeal to our better instincts?

The Trudeau government: First, some ethical questions
May 15, 2018 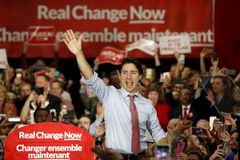