Under previous Liberal and Conservative governments, Canada's spending after inflation fell for foreign aid, defence and diplomacy. Canada ranks near the bottom on every list of comparable countries for spending on overseas matters.

Nothing in the current Liberal government's platform recommends an increase for any of these three pillars of a country's commitment to and interest in the world.

It therefore took more than a bit of gall for Prime Minister Justin Trudeau to tell a U.S. television interviewer that he wishes the United States paid somewhat more attention to the world. Huh?

You might not like how the Americans pay attention and go about business here and there. The United States might not be what former U.S. secretary of state Madeleine Albright called the "indispensable nation," but the definition remains close to the mark.

Look around the world. Do the Asians, minus China, want the U.S. to disengage from their region? Do the Europeans want less of the United States what with Russia returning to the age-old attitudes of Mother Russia, a mixture of insecurity, muscle and authoritarianism?

Who is Nigeria calling for help against the gangsters in Boko Haram? Who's the new president of Argentina anxious to meet? Who's going to Cuba, with great fanfare? Who's leading the fight against the Islamic State, not with humanitarian assistance and training but with the military? Who tried, yet again, to bring the Israelis and Palestinians together?

The Obama administration will be paying attention to Canada for a fleeting moment this week in these dying months of its eight-year term, having paid scant heed to Canada for the previous seven years.

The state dinner the president will offer Mr. Trudeau on Thursday night is a kind of Not-The-Stephen Harper dinner, the previous prime minister having allowed pique and his own prickliness to get in the way of friendly relations with the President.

Quickly after assuming office, the Trudeau team used the new Prime Minister's sex appeal, name and persona to play to the celebrity culture in the United States. To the extent that the celebrity game can work for any Canadian in that country, it has worked for Mr. Trudeau, if media coverage and now the state dinner offer any indications.

So, too, the Prime Minister's expansive liberalism jibes with Mr. Obama's view of what the state can or should do, the problem in the U.S. being that his hands are frequently tied by Congress and sometimes by the Supreme Court. Just imagine what Mr. Obama would have done to the United States with a parliamentary majority.

Mr. Obama's time in office is drawing to a close, as is his ability to get anything done. As a result, the likely list of "announcements" from the Obama-Trudeau meetings will be a collection of hardy perennials with spin.

We will likely hear about yet another initiative to speed commerce through the U.S.-Canada border, a worthwhile endeavor to be sure, except that previous efforts have produced distinctly modest results.

Please remember that the Obama administration did next to nothing to speed approval of the new bridge at Windsor that Canadian governments so desperately wanted. Like good Yankee traders, the Americans got Canadians to build everything and take all the risk and maybe later this century take the profits, assuming any materialize.

We will likely hear about joint efforts to combat climate change, except that the Congress in the U.S. and the provinces in Canada don't agree with the approaches of the Obama administration and Trudeau government. Moreover, during the Harper government, much was made of a co-ordinated effort to promote "clean energy," without much ever happening except on paper.

The usual blueberries-to-borders agenda is always important to Canada, dependent as it is on the U.S. market, but seldom of sustained interest to Americans who, Mr. Trudeau's comments notwithstanding, have many and more important engagements in the world than Canada.

If Canada were actually to become seriously engaged again in the world with dollars and initiatives, instead of rhetoric about "being back," perhaps the U.S. would pay some attention to a country that recently has believed more in words than deeds. 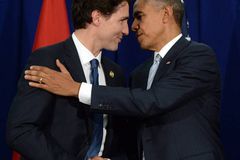