Chuck Strahl was a well-liked and respected minister in the Harper government.

One day, as minister of transport, he held a photo op-cum-announcement at the Ottawa airport. He promised measures to speed up screening at airports. A good news announcement if ever one existed.

Except that shortly after, a new test appeared. Selected passengers would now be required to show the palms of their hands and be checked for powder residue, in case they had been making bombs or other explosives.

Agents for the Canadian Air Transport Security Authority, when asked how this new test jibed with the minister's declaration, delivered their usual blank stares. We are only administering Transport Canada's policies, the agents correctly replied.

Time-and-motion experts would have a field day with CATSA and Transport Canada. These agencies have devised the most inefficient screening system on earth, and yet CATSA (a Crown corporation) in recent pronouncements declared it needs more money. Spokesmen for the country's airports seem to agree that without more money, lines will grow even longer.

In the United States, anger about growing airport lines has boiled over into enormous media coverage, congressional hearings, furious passengers venting their frustrations at missed flights, airlines railing at lost business. The whole system is a mess – except for one element that makes it a joy compared with Canada's.

There, passengers who undergo security checks and pay for the equivalent of the Nexus card are whisked through lines, needing only to show their cellphones. No placing of laptops in trays, no removal or shoes and belts, no frisking by officers.

In Canada, for reasons no CATSA officer has ever been able to explain to an inquiring traveller, the Nexus card gets the traveller into a shorter line but then he or she is given the same scrutiny as everyone else – despite having been pre-screened to get the Nexus card.

It is sometimes asserted in Canada that strict measures at airports are a way of pleasing the security-crazed Americans. How ironic, then, that Canadian measures for those who have been security-checked are much stricter than in the United States.

Another example. In Germany – Germans being rather good at engineering – trays into which travellers put metal objects and laptops are placed on a conveyor belt. At the end, the trays drop down onto another belt that takes the trays back to the starting point.

In this country's airports, CATSA employees walk back and forth all day carrying trays from one end of the conveyor belt to the other. Call it make work, call it inefficient, call it needless overstaffing. It's crazy.

It can be amusing, for those with a taste for theatre of the absurd, to spend time observing how CATSA handles passengers. Everyone is treated equally, despite age, infirmities or other indications of no conceivable threat.

Grandmothers in wheelchairs are usually made to get out of their chair and shuffle through the screening machines, often with difficulty, after which the metal-detecting devices go up and down their bodies. Even their wheelchairs – usually the property of the airlines or airport – are screened just in case granny slipped some explosives inside the wheelchair's metal. Three- and four-year-old children get the same routine.

In Australia, by contrast, the power of the screening machines through which passengers pass is turned down. Therefore, perhaps one in 10 is selected for a quick swab test that takes maybe 20 seconds. As a result, passenger lines are shorter and move more quickly, without any threat to national security.

Presumably, without any Australian in authority saying so publicly, security officers apply the swab test to anyone they might suspect and let through grannies, grandchildren and lots of ordinary passengers.

It used to be said unkindly of Air Canada (a greatly improved airline much hindered by government policies) that "we're not happy unless you are unhappy." Today, that epithet can be applied to Transport Canada and its agent, CATSA.

The lost time for travellers in economic terms cannot be calculated, nor can the frustration for airlines. Worse, Ottawa takes in more money from travellers in the form of a security tax than it gives to CATSA – another example of how the federal government treats air passengers as golden geese to be plucked at will.

Other countries have much tougher mandated service levels than the putative targets CATSA gives itself. So before the federal government gives Transport Canada and CATSA another nickel beyond what it forked over in the last budget, it should say, "Physician, heal thyself!" 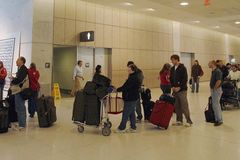 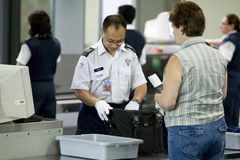