Alberta Premier Rachel Notley, to her government's great credit, has tried for the first time to outline a comprehensive and serious plan for the province to curb greenhouse gas emissions that cause climate change.

Alberta has been harried at home and abroad for doing so little, especially as production of bitumen oil exploded. Albertans might have thought they were doing plenty, but nobody else did.

Their NDP Premier understood the problem. In November, she announced the phasing out of coal-generated electricity, a carbon price on greenhouse gases, a bitumen oil emission limit and green investments, among other initiatives.

Al Gore, former U.S. vice-president, hailed the announcement. So did the perpetually grouchy Neil Young, the expatriate Canadian singer. Some environmental groups applauded. (Greenpeace, predictably, grumbled that the government was doing too little.)

Ms. Notley's plan had two overriding objectives. First, to reduce Alberta's emissions over time, since they are the highest per capita in Canada. Second, to persuade critics that the province was cleaning up its act, thereby making the case easier for shipping Alberta bitumen from the land-locked province.

Perhaps it is too soon to expect results toward achieving the second objective of easing the persuasion of others. Thus far, nobody outside Alberta is paying attention to the Premier's sweeping announcement.

Now, the B.C. government has refused to endorse the proposed Kinder Morgan oil pipeline down the Fraser River to the Lower Mainland, saying the company has not produced enough evidence of state-of-the-art cleanup capacity. Without B.C. government approval, it's difficult to imagine this pipeline proceeding.

With these groups, if greenhouse gas emissions don't suffice as a counterargument, then how about spills, or the weakness (as they see it) of the review process, the failure to adequately consult themselves and other opponents, and the ultimate argument – that the public interest will not be served, that interest being defined only by themselves? To hell with Ms. Notley's plan. The hard-liners don't want any development of any fossil fuels here, there or anywhere. The rest of their arguments are smokescreens for their implacable opposition to development.

The defeat, now or later, of the three pipeline projects from Alberta south and west leaves only one option: TransCanada Corp.'s proposed Energy East project from northern Alberta to New Brunswick.

This project represents a line in the sand for Mr. Trudeau's fledgling government. Having de facto killed one pipeline (Northern Gateway), can it afford to be indifferent or hostile to Energy East, a project that would replace imported oil in eastern Canadian refineries with 1.1 million barrels a day of oil from Alberta and Saskatchewan, thereby keeping an estimated $8-billion in Canada?

Can the government pass up a project the Conference Board estimates might create 14,000 direct and indirect jobs during development and construction, and provide hundreds of millions of dollars in tax revenues a year? Can it afford to oppose a project that offers the beleaguered province of New Brunswick a lifeline in the form of developing an energy hub?

Remember that Energy East's oil will be replacing imported oil. Some will also be shipped overseas, where it will not be replaced by the dream of every environmentalist: wind or solar power. It would be shipped to Europe and Asia, where oil will be consumed for a very long time.

Remember, too, that Alberta is cleaning up, belatedly but seriously, its bitumen act courtesy of the provincial government, even if to date Alberta has received no credit for its government's plans.

Energy East will be a test case for environmentalists. Are they capable of giving credit anywhere and any time? Or are they locked into permanent opposition to every project, in which case they can and should be ignored?

Energy East will test Mr. Trudeau's government, which suggests it wants a "balanced" energy policy, but thus far hasn't provided any evidence that it means what it says.

Jeffrey Simpson: Governments must step up to the growth challenge Subscriber content
May 16, 2018 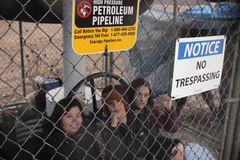